What you need to know: Data, analysis and more from Guttmacher experts

On December 1, 2021, the U.S. Supreme Court heard oral arguments in Dobbs v. Jackson Women’s Health Organization, a case about a blatantly unconstitutional Mississippi law that would ban abortion after 15 weeks of pregnancy. This case is a direct challenge to Roe v. Wade, the landmark 1973 Supreme Court decision that affirmed the constitutional right to abortion.

In the almost 50 years since Roe, anti-abortion politicians have waged incremental attacks against abortion access. With this Mississippi case, they are now demanding outright that the Supreme Court ignore established legal precedent and completely overturn Roe. By agreeing to hear the case, the Supreme Court has signaled its potential willingness to overturn decades of its own decisions upholding abortion rights. In a separate development, the Supreme Court allowed a Texas law banning abortion at six weeks to go into effect in direct violation of Roe.

This page presents new Guttmacher evidence on who would be impacted if the Supreme Court chips away at or entirely overturns Roe. It also includes information on the legal landscape for abortion across the United States, as well as policy analysis and key research. 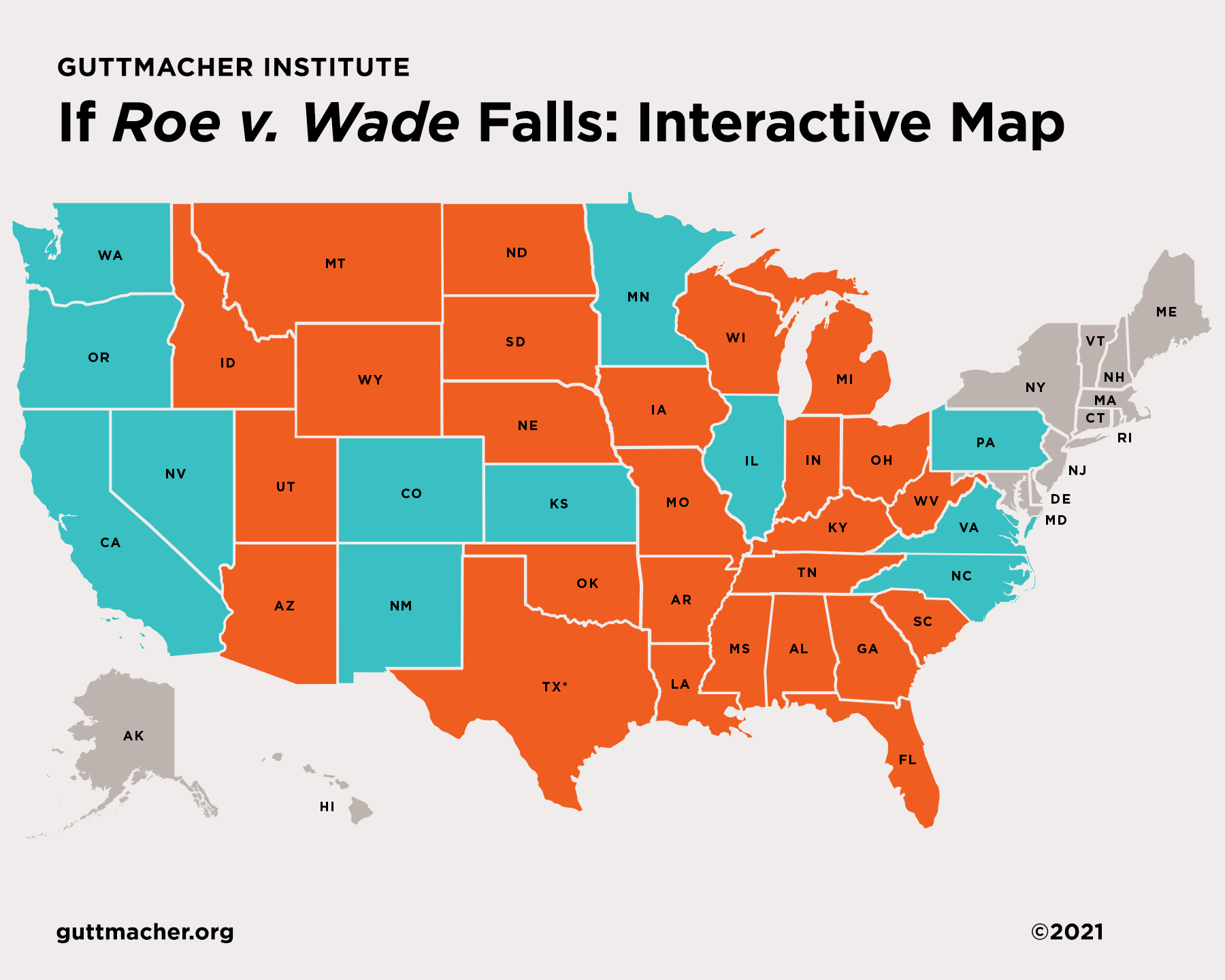 This interactive map allows users to see the potential effects of a total ban, a 15-week ban and a 20-week ban in some states on how far people seeking abortion care would have to drive to find care. The map also shows which states are unlikely to ban abortion and would have the nearest clinic for people driving from states where abortion is banned or further restricted.

The infographics and animated graphics in this library provide an overview of data and policies about abortion in the United States, as well as who would be impacted if Roe is weakened or overturned. They are free to use with proper attribution to the Guttmacher Institute. 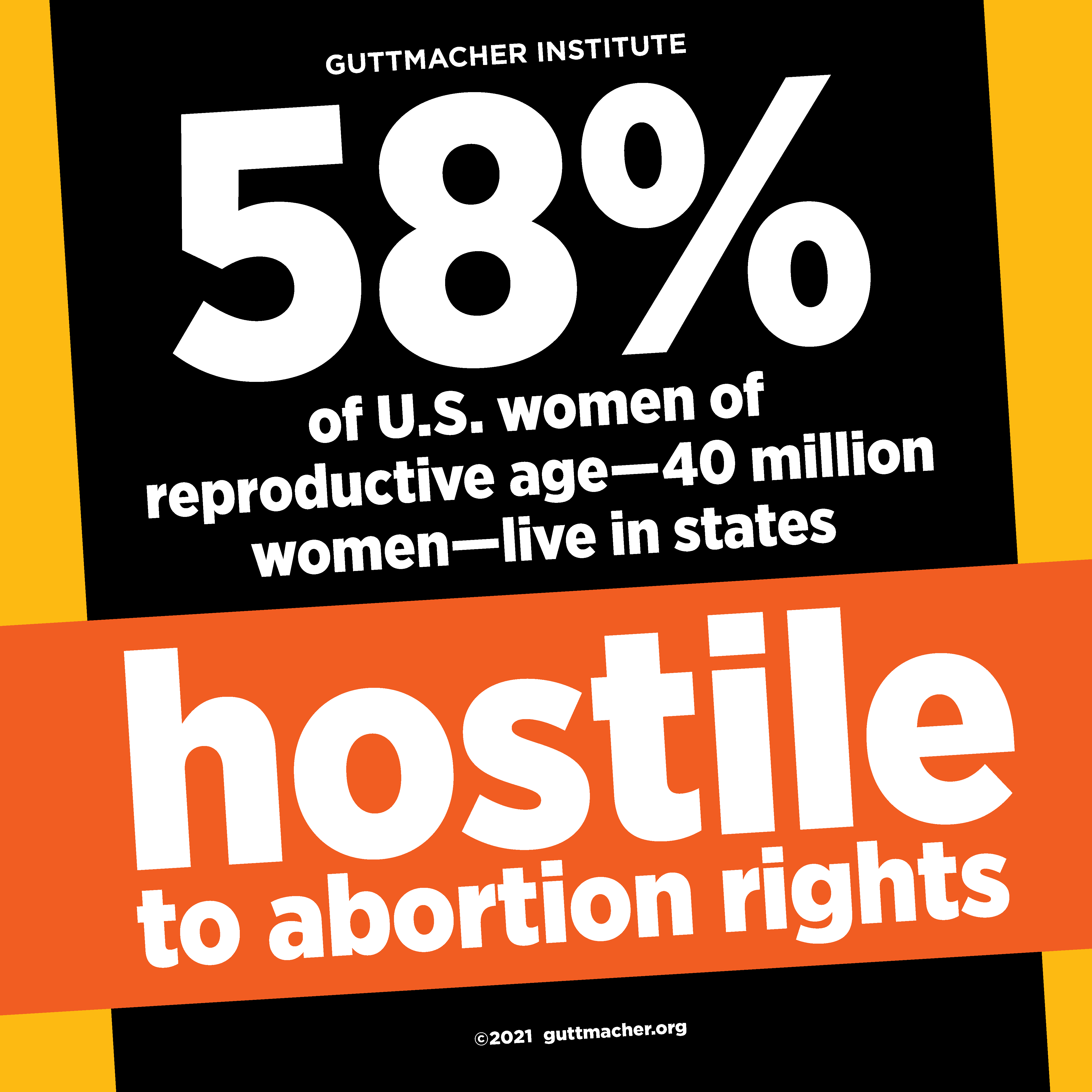 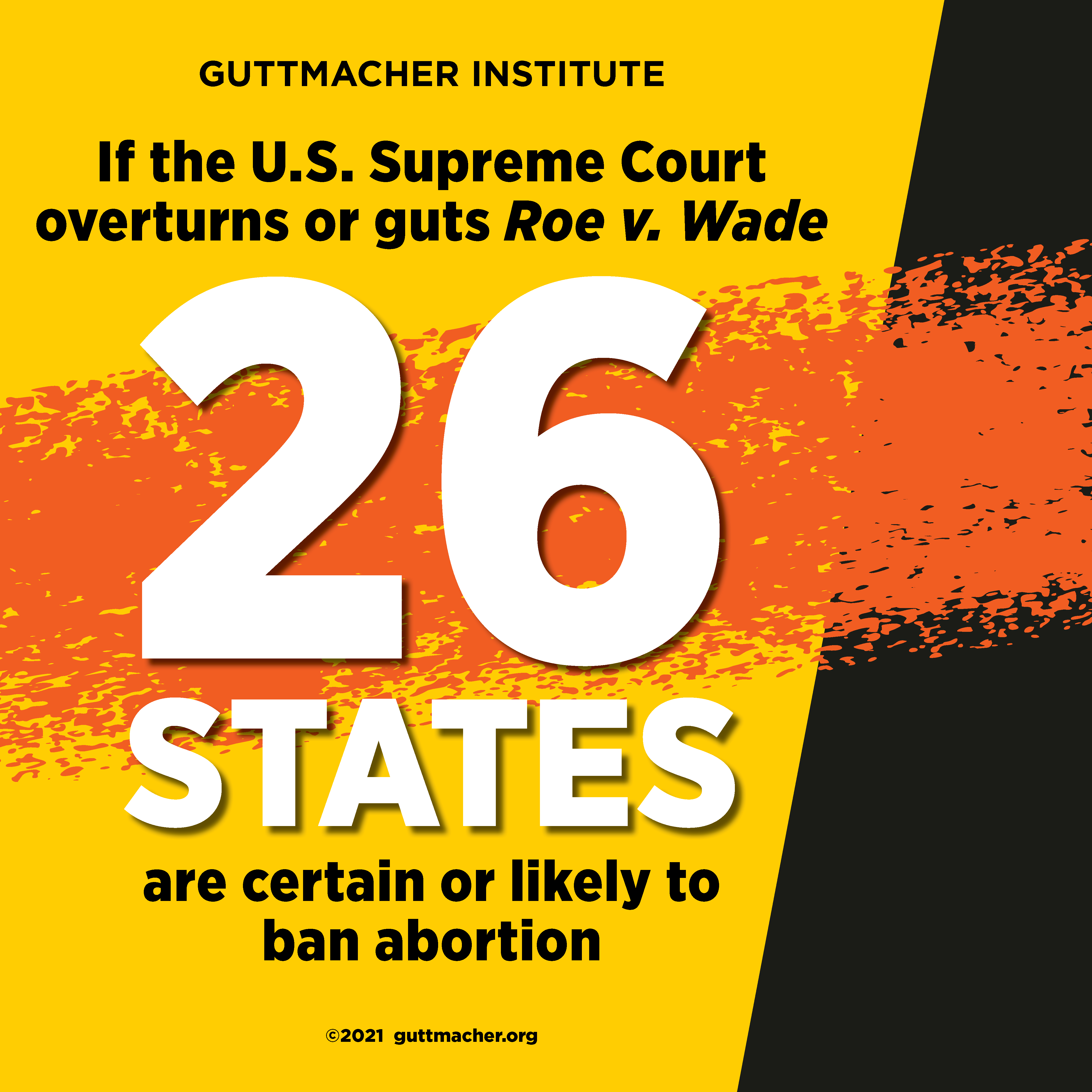 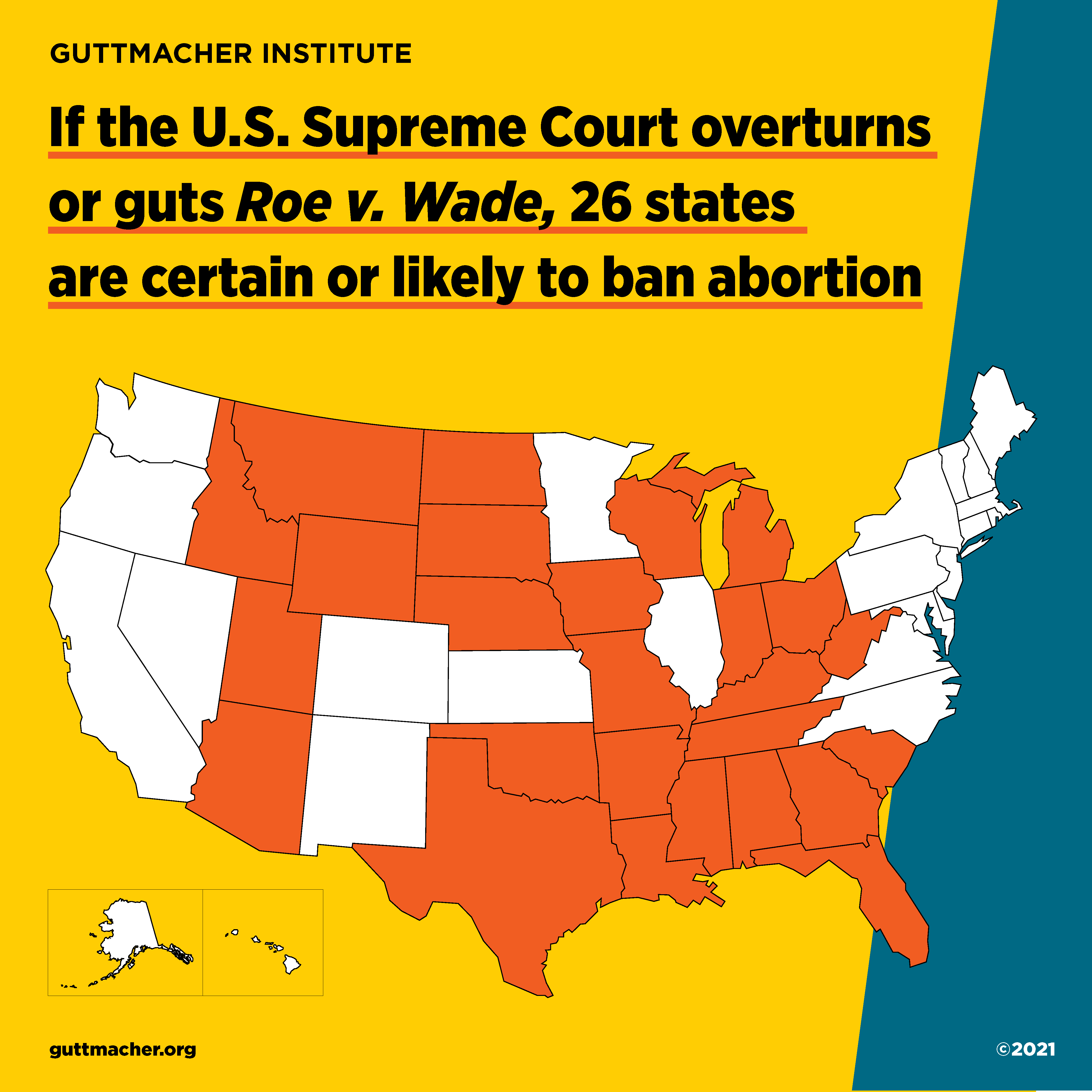 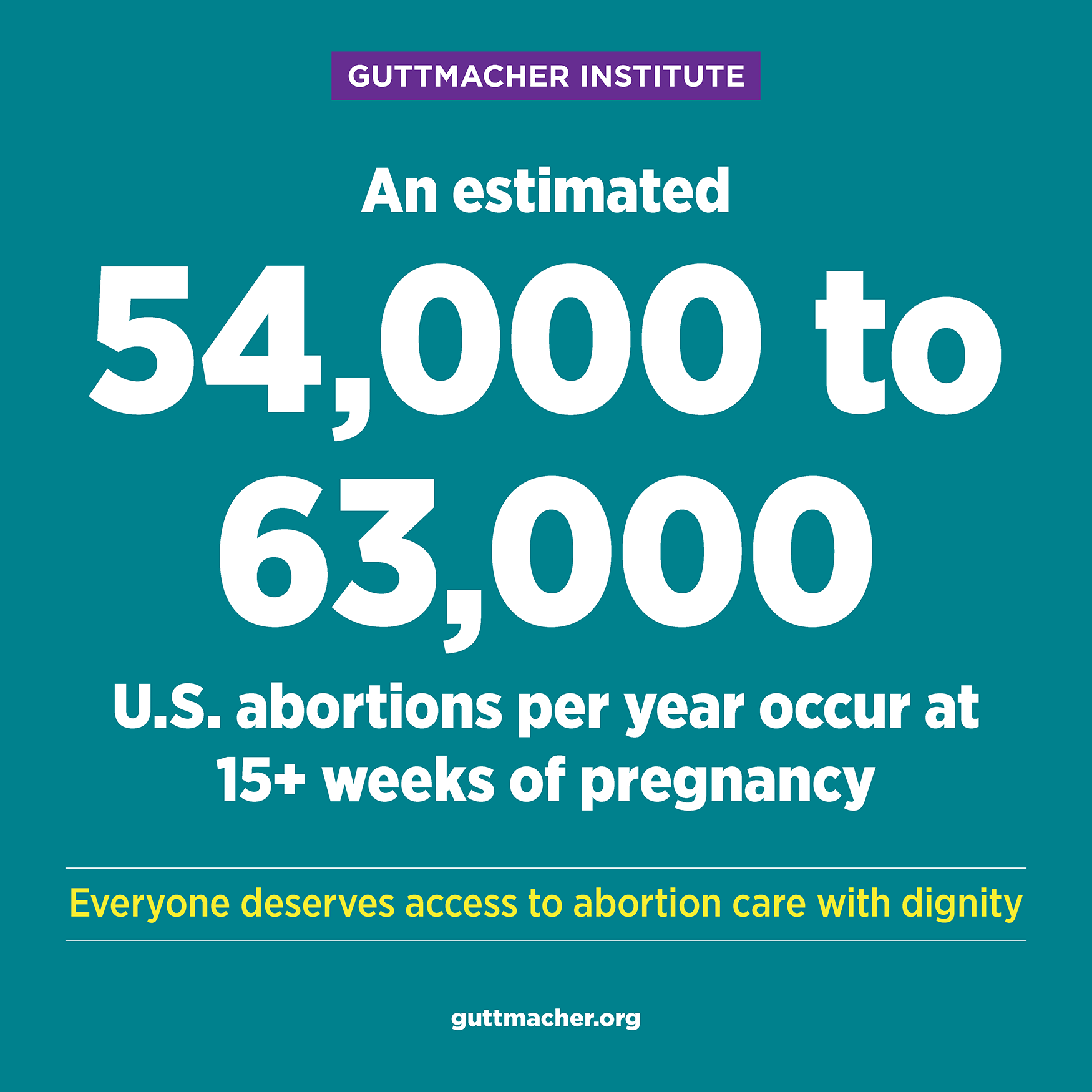 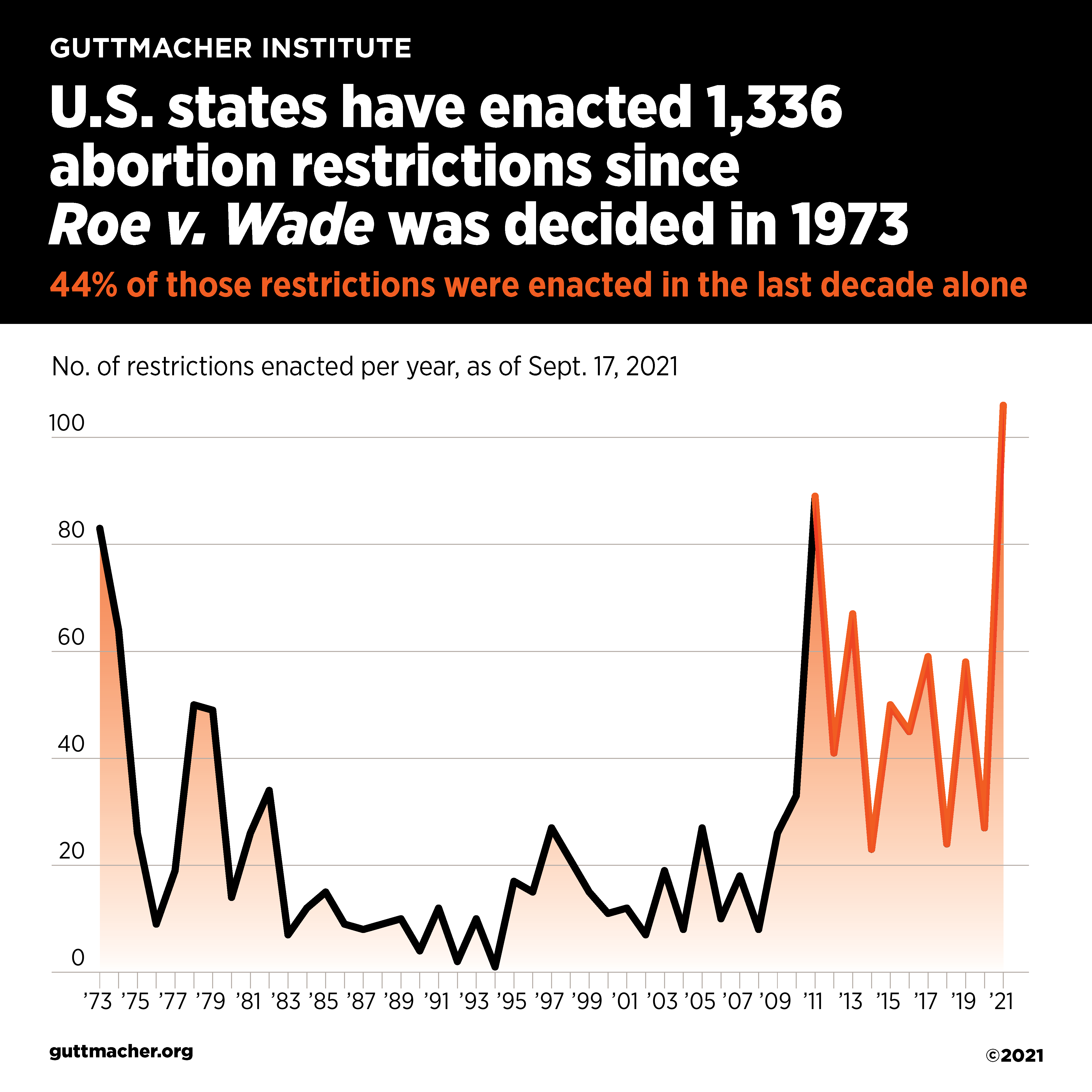 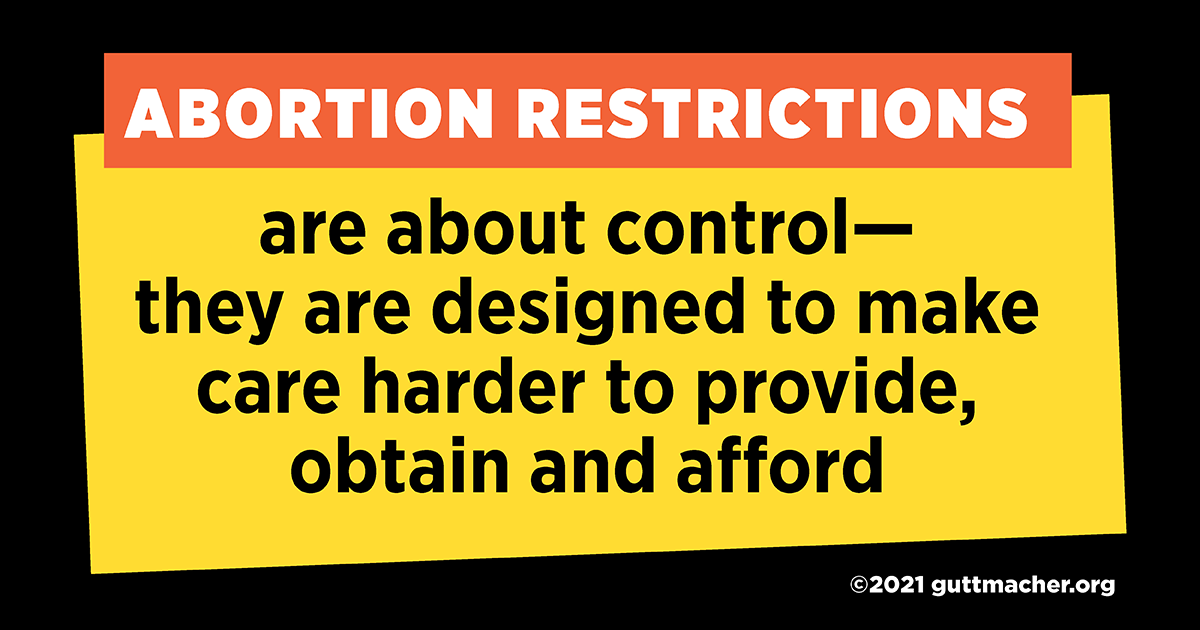 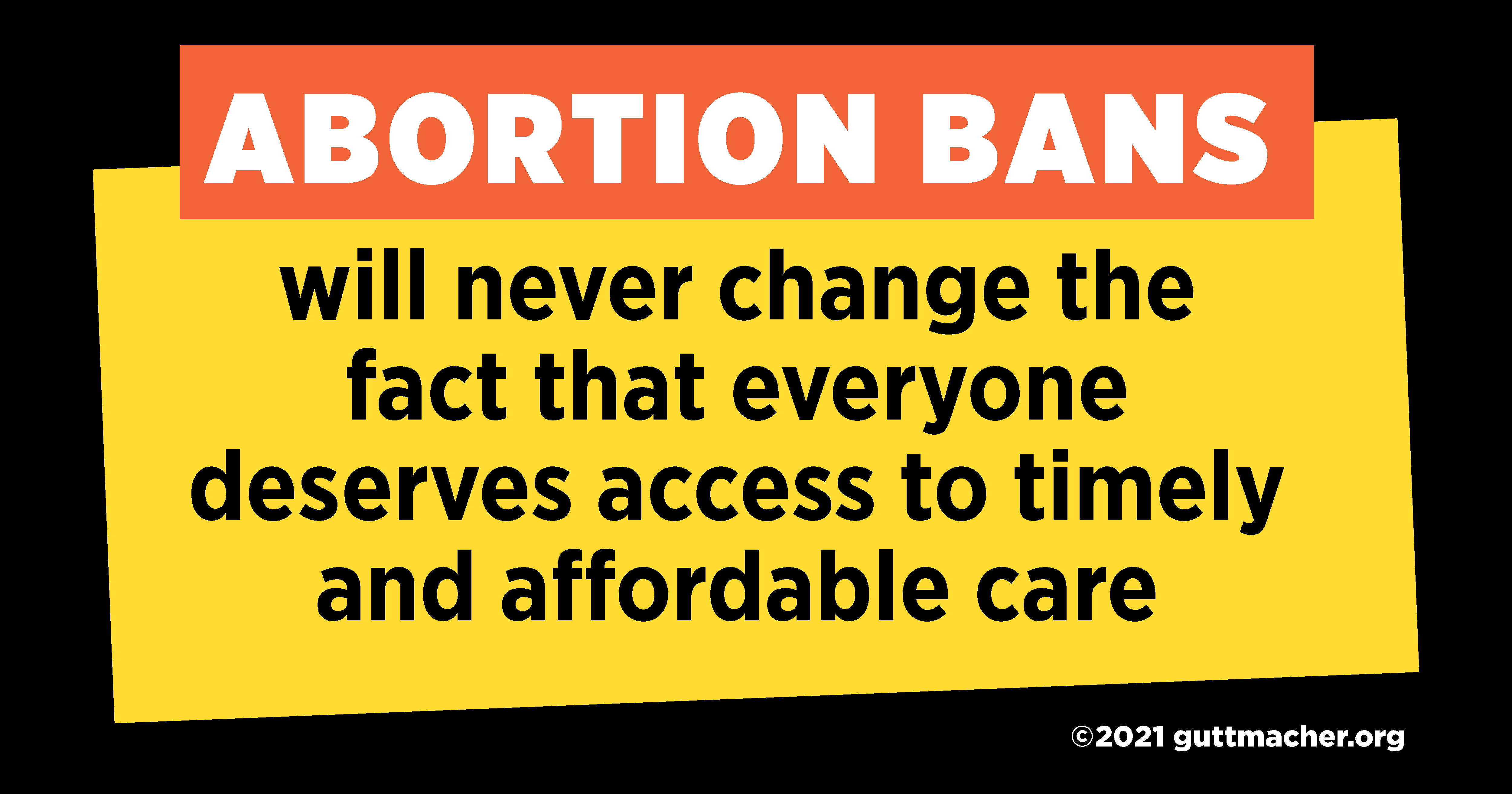 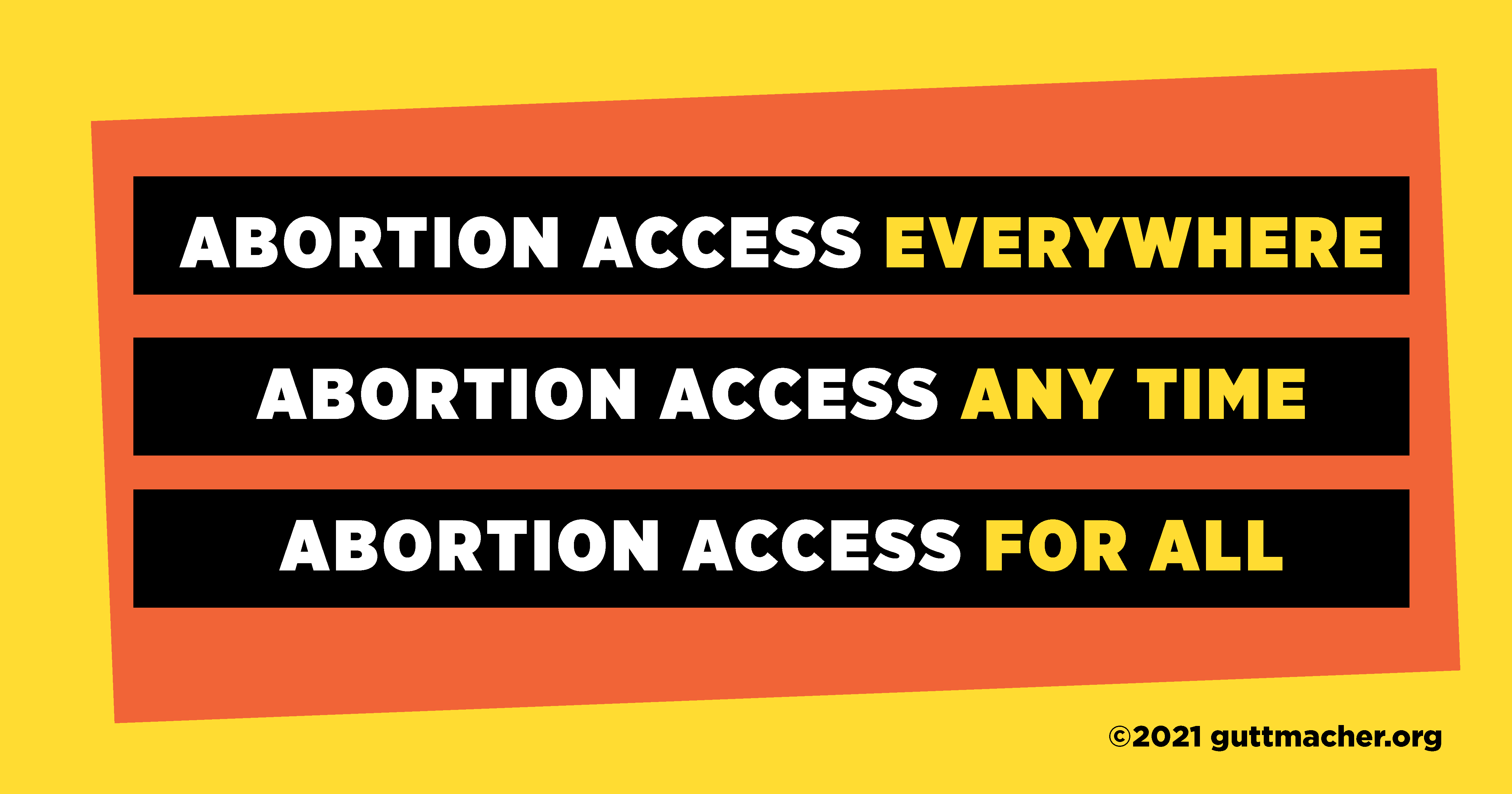 Who has abortions in the United States (part 1)

Provides an overview of U.S. abortion patients by age, income and parental status

Who has abortions in the United States (part 2)

Provides an overview of U.S. abortion patients by race and religion

Abortion rights in the United States are in serious jeopardy

Here's How Philanthropy Can Protect Access to Abortion in a Post-'Roe v. Wade' World

In a new op-ed in The Chronicle of Philanthropy, Guttmacher experts detail priority areas where philanthropists should urgently make investments to support and protect access to abortion if Roe v. Wade is overturned. The authors argue that the leaked Supreme Court opinion makes clear that now is the time for philanthropists who believe in social justice and human rights to support abortion access, protect those likely to be harmed by abortion bans and work toward restoring strong policies.

On May 2, Politico published a leaked draft of the Supreme Court majority decision in Dobbs v. Jackson Women’s Health Organization that would explicitly overturn Roe v. Wade and 50 years of the Court’s own legal precedent upholding the constitutional right to abortion. This news release includes a statement by Dr. Herminia Palacio and highlights the consequences if the Court issues a similar decision to this draft version, including that 26 states are certain or likely to move quickly to ban abortion.

With the US Supreme Court poised to weaken or overturn Roe v. Wade, 2022 is shaping up to be a devastating year for abortion rights and access. More than 500 restrictions have been introduced since the start of state legislative sessions in January. Two key themes emerging are anti-abortion policymakers’ continued pursuit of various types of abortion bans and restrictions on medication abortion. Many state legislatures have also introduced measures to protect or expand abortion rights and access to care. Our experts continually update this guide to help readers keep track of the latest abortion laws.

Conservative-led state legislatures enacted a record 108 abortion restrictions in 19 states in 2021. These legislatures also focused on passing measures that restrict voting access and enacting discriminatory policies against LGBTQ individuals, especially transgender youth. At the same time, some state legislatures expanded access to reproductive health services. More than half of the states increased access to pregnancy and postpartum care; many of these new provisions were designed to reduce racial disparities in maternal mortality. Several states now allow pharmacists to prescribe contraceptives or medication that helps prevent HIV. And a few states expanded access to abortion services, primarily by repealing restrictions.

Why This Anniversary of Roe v. Wade Matters So Much: Reflections from Guttmacher Experts

Since Roe v. Wade was decided by the US Supreme Court in 1973, the right to an abortion has been increasingly hollowed out, making it a right on paper only for far too many people. However, while Roe alone is far from enough, it is still a crucial safeguard and the foundation on which to build a future where all people can get the care they need, want and deserve. Our experts reflect on what this anniversary means to them.
Read the resource (January 2022)

Texas Abortion Ban Foreshadows the Potential Fate of Half the Nation

In a new op-ed, Herminia Palacio of the Guttmacher Institute and Jamila Perritt of Physicians for Reproductive Health detail the barriers for Texans seeking an abortion in the wake of the state’s ban at six weeks of pregnancy. The dire situation in Texas offers a glimpse of what could be in store for nearly half of the nation, as the US Supreme Court hears a case about Mississippi’s 15-week abortion ban that challenges Roe v. Wade. Depending on how the Supreme Court rules, millions of people could lose the right to get an abortion in their home state.
Read the op-ed (November 2021)

Resources for Journalists: 15 Things to Consider When Covering Abortion, the Supreme Court and a Potential “Post-Roe World”

The US abortion policy landscape is undergoing major shifts. Here are 15 key ideas for journalists, whether new or experienced with the topic, to consider as they write about the future of abortion rights in the country.
Read the resource (November 2021)

Guttmacher researchers have new survey data showing the immediate and far-reaching impact of Texas’ ban on abortion after six weeks of pregnancy (S.B. 8). Excluding the four states that border Texas, 11 states and the District of Columbia had an increase in the number of abortions provided to Texas residents. These included states that are hundreds, and even thousands, of miles from the Texas border, such as Illinois, Washington, Ohio and Maryland.
Read the analysis (November 2021)

26 States Are Certain or Likely to Ban Abortion Without Roe

If Roe v. Wade were overturned or fundamentally weakened, 22 states have laws or constitutional amendments already in place that would make them certain to attempt to ban abortion as quickly as possible. An additional four states have political composition, history and other indicators—such as recent actions to limit access to abortion—that show they are likely to ban abortion as soon as possible without federal protections. This analysis details which states are in each category and the types of restrictions they have passed.
Read the analysis (October 2021)

For the First Time Ever, U.S. States Enacted More Than 100 Abortion Restrictions in a Single Year

Amicus Brief by the American Public Health Association, Guttmacher Institute and others

Signed by more than 100 social scientists with extensive experience conducting and publishing peer-reviewed research about the safety, incidence and health impacts of abortion. The brief demonstrates that abortion is a common and safe medical procedure, explains why Mississippi’s abortion ban would increase risks to pregnant people’s health and safety, and documents why the ban would disproportionately impact marginalized populations. The brief further details how denying access to abortion has negative socioeconomic consequences.
Read the amicus brief (September 2021)

In this report, Guttmacher experts estimate how many people nationwide obtain abortions at or after 15 weeks of pregnancy and calculate driving distances for Mississippi residents seeking an abortion under further restrictions. The analysis describes how distances to reach an abortion clinic would dramatically increase, along with the burdens on those seeking abortion care, if the state’s 15-week abortion ban is upheld or if Roe v. Wade is fundamentally weakened.
Read the report (August 2021)

By July, 2021 had set the record for the worst year for abortion rights at the state level. In this analysis, our experts tally 90 restrictions enacted in the first six months of this year, detail the onslaught of attacks on transgender health and rights, and spotlight states that have been proactive in safeguarding abortion access and improving maternal health.
Read the analysis (July 2021)

Abortion Is at the Supreme Court Again. It's Different This Time

Abortion Service Delivery in Clinics by State Policy Climate in 2017

This study explores several aspects of abortion care, including cost, gestational parameters and types of other services that clinics offer. The researchers found that most abortion facilities provide a range of other health care services, but the number of clinics offering these services was higher in states with policies supportive of abortion.
Read the study (October 2020)

Gestational Age Bans: Harmful at Any Stage of Pregnancy

Gestational age bans are a favored tactic of antiabortion activists and politicians as they seek to undermine and ultimately overturn the constitutional right to abortion. This analysis outlines how these policies are harmful by placing an arbitrary deadline on abortion care with no consideration for the health, circumstances or well-being of those seeking abortion.
Read the analysis (January 2020)

Abortion Incidence and Service Availability in the United States, 2017

Guttmacher’s most recent data on abortion in the United States found that abortion reached its lowest rate nationally since Roe v. Wade, continuing a trend of long-term decline. The report also documented changes in the number and location of abortion providers, with an increase in the Northeast and the West and decrease in the Midwest and the South.
Read the report (September 2019)

Hear From An Expert

If the Supreme Court uses the Mississippi case to further undermine abortion rights and access, the effect will be devastating nationwide.