Skip to main content
December 2021
Policy Analysis
The time is now. Will you stand up for reproductive health and rights?
Donate Now

This analysis has been updated to include abortion restrictions signed at the end of 2021.

This analysis has been adjusted to reflect the United States Food and Drug Administration's changes to the restrictions on medication abortion.

State legislatures across the United States regularly made headlines in 2021 by enacting laws, including a record number of abortion restrictions, that limited human and civil rights. In their return to near-regular activity after the first wave of the COVID-19 pandemic abbreviated many sessions in 2020, conservative-led legislatures focused on restricting voting access, enacting discriminatory policies against LGBTQ individuals—transgender youth in particular—and limiting abortion, particularly through bans early in pregnancy and restrictions on medication abortion.

At the same time, some state legislatures expanded access to reproductive health services. More than half of the states increased access to pregnancy and postpartum care; many of these new provisions were designed to reduce racial disparities in maternal mortality. Several states now allow pharmacists to prescribe contraceptives or medication that help prevent HIV. And a few states expanded access to abortion services, primarily by repealing restrictions.

These gains are important, but the damage to abortion rights is profound. Abortion access is already very limited for many people, including Black and Brown people, low-income individuals, LGBTQ individuals and young people, as well as those living in the South, the Plains and the Midwest. Many states in these regions have enacted bans that violate the US Constitution in the hope that the Supreme Court will soon eliminate federal constitutional protections for abortion.

The South is a particular concern: The Supreme Court has allowed Texas’ ban on abortion starting at six weeks of pregnancy to remain in effect—and it is possible that the Court, which in December heard arguments in Mississippi’s ban on abortions after 15 weeks, might uphold that prohibition and use the opportunity to overturn Roe v. Wade.

If the Court overturns that landmark 1973 decision guaranteeing a constitutional right to abortion, our recent analysis shows that 26 states are certain or likely to ban abortion. People seeking abortion care would face vastly increased travel distances to reach their next nearest clinic. In addition, the effects of these bans would be felt across the country, as states that protect abortion rights would suddenly be home to the closest provider for many people who want an abortion.

Several states enacted other types of bans this year. Among these, only the South Dakota prohibition is in effect. 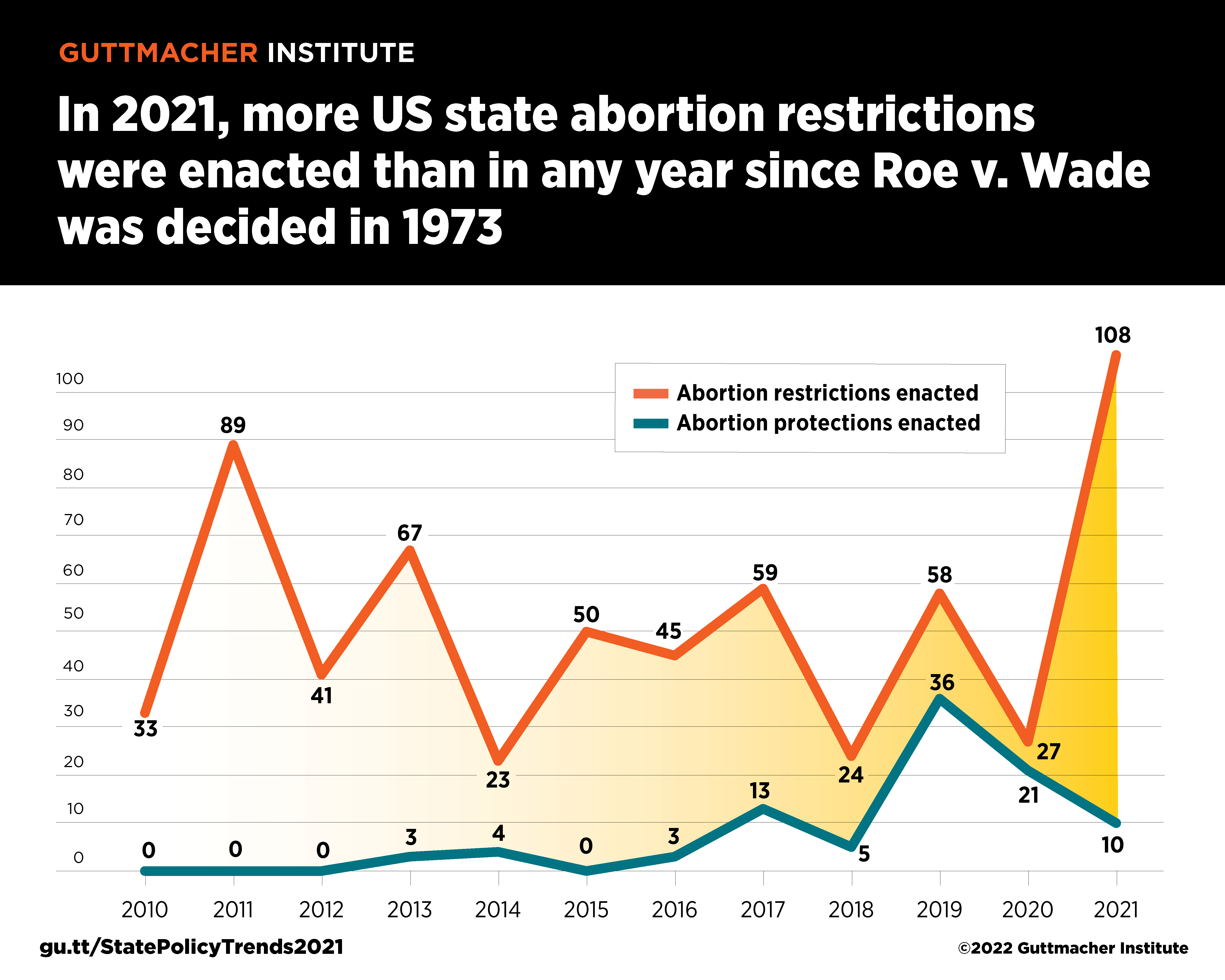 In 2021, eight states (Arizona, Arkansas, Indiana, Montana, Ohio, Oklahoma, South Dakota and Texas) enacted restrictions on medication abortion. Some of these restrictions are not in effect because they have been challenged in court, including the Montana, Ohio and Oklahoma restrictions.

As they have in the past decade, states expanded access to and improved provision of maternal health care. In 2021, 81 provisions were enacted in 27 states and the District of Columbia; both progressive and conservative state legislatures passed measures aimed at improving maternal health outcomes. Enacted measures include those that increase access to pregnancy-related care, expand postpartum Medicaid coverage, improve reproductive health care for those who are incarcerated and support state maternal mortality review committees (MMRCs).

Many states are expanding pharmacists’ prescribing authority to include the ability to prescribe contraceptives or medication that helps prevent HIV. This year, 10 states adopted provisions that allow pharmacists to prescribe one or both of these types of medications. Once regulations are adopted, people in 21 states in total and DC will have expanded access to contraceptives, and HIV medication will be accessible in eight states.

The provisions to allow pharmacists to prescribe contraceptives that were enacted in six states (Arizona, Arkansas, Delaware, Illinois, Nevada and North Carolina) are similar to laws in other states, although the Arizona and Arkansas programs only allow adults to use this service. Three states (Oregon, Utah and Virginia) that already have pharmacy access for contraceptives, along with Maine, Nevada and North Carolina, enacted measures that allow pharmacists to provide HIV medication. Pharmacists are allowed to provide pre- and postexposure HIV preventive medication in all of these states, except in North Carolina, where they can only prescribe postexposure medication.

Although they were overshadowed by the number and scope of abortion bans and restrictions enacted in 2021, provisions to protect and expand access to care were enacted in states along the East Coast and in the West.

Six Months Post-Roe, 24 US States Have Banned Abortion or Are Likely to Do So: A Roundup

Inequity in US Abortion Rights and Access: The End of Roe Is Deepening Existing Divides