Meeting Their Contraceptive Needs Would Dramatically Reduce Unintended Pregnancies and Maternal Deaths
May 17, 2016

Preventing unintended pregnancy is essential to improving sexual and reproductive health and social and economic well-being among adolescent women, yet a new report finds that many who want to avoid pregnancy are not receiving the services they need to protect their health and delay childbearing. The report, Adding It Up: Costs and Benefits of Meeting the Contraceptive Needs of Adolescents, by Jacqueline E. Darroch et al., released today by the Guttmacher Institute, finds that an estimated 38 million of the 252 million adolescent women aged 15–19 in developing regions are sexually active and want to avoid pregnancy. Yet 23 million of these adolescents have an unmet need for modern contraception: they are sexually active and want to avoid having a baby within the next two years but are not using modern contraceptives. Most adolescents with unmet need are using no contraceptive method (84%); the remaining 16% rely on traditional methods, primarily withdrawal and periodic abstinence, which are less effective than modern methods.

"Making it possible for young women to avoid unintended pregnancy and childbearing until they feel ready to become mothers can have a profound impact. It allows them to achieve healthier lives for themselves and their children, more education and better job opportunities," says lead author Jacqueline E. Darroch. "The positive impact of investing in sexual and reproductive health services for adolescent women is undeniable." 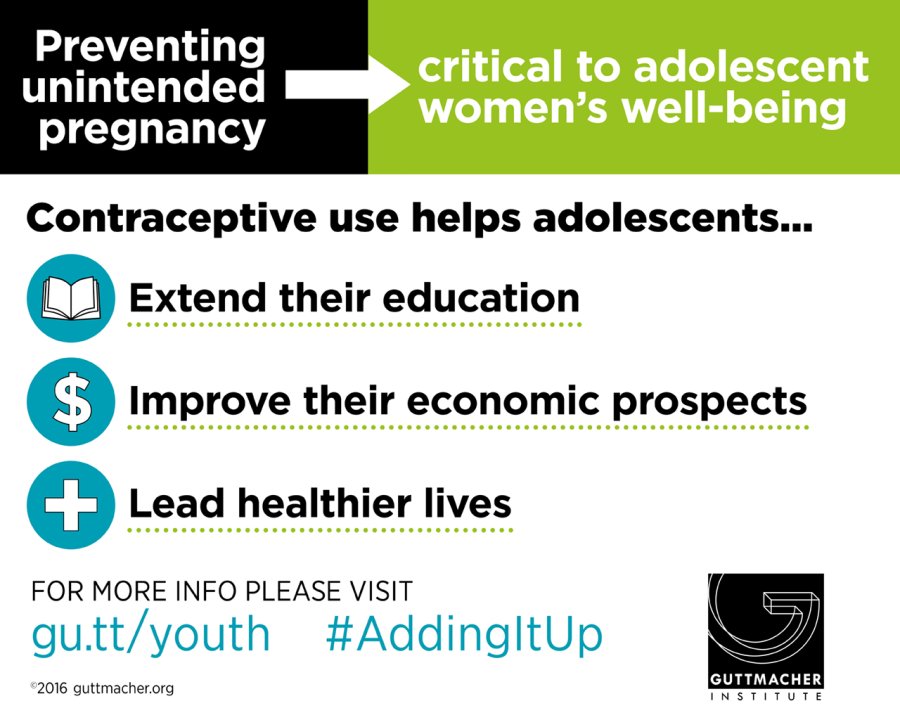 The researchers estimate the total cost of providing modern contraceptives to the 15 million adolescent women currently using them is $222 million per year. Improving existing services to better serve current users (including increasing young people’s access to accurate information and education and ensuring they have a range of modern methods from which to choose) would increase the cost to $313 million per year. Expanding contraceptive services to also address the needs of the 23 million adolescent women who currently have an unmet need for modern contraception would increase the total cost to $770 million annually. Regionally, costs would be $351 million in Africa, $222 million in Asia, and $196 million in Latin America and the Caribbean.

On average, providing high-quality contraceptive services to all adolescent women aged 15–19 who are sexually active and want to avoid becoming pregnant would cost just $21 per user each year.

The impact of this investment would be dramatic. Meeting the need for modern contraception for all adolescent women who want to avoid pregnancy would result in

Based on the study’s findings, the authors suggest that program planners and policymakers must work on several fronts to meet adolescents’ needs: prevent human rights violations such as child marriage, coerced sex and sexual abuse, which underlie some sexual activity among young women; promote adolescent women’s education and advance the status of girls and women in society; and provide high-quality sex education and contraceptive counseling and services to help young women overcome barriers to contraceptive use and to protect their rights to voluntary, informed and confidential contraceptive choice.

For this report, researchers analyzed data from a wide range of sources, including survey data from women aged 15–19 in developing countries, to document the number of adolescent women who lack contraceptive services, what it would cost to meet their needs, benefits of meeting these needs and the obstacles to providing adolescents with necessary services.

Adding It Up: Costs and Benefits of Meeting the Contraceptive Needs of Adolescents, by Jacqueline E. Darroch, Vanessa Woog, Akinrinola Bankole and Lori S. Ashford is available online.

This report was made possible by grants from the Bill & Melinda Gates Foundation, Children’s Investment Fund Foundation, the Swedish International Development Cooperation Agency and the UK Government. The views expressed are those of the authors and do not necessarily reflect the positions and policies of the donors.