The Affordable Care Act (ACA) has significantly altered the state of health insurance coverage for many among the millions of U.S. women in need of family planning care. According to a recent Guttmacher Institute analysis, the proportion of women who were uninsured declined from 19% in 2012 to 12% in 2015. Moreover, for most women with private insurance plans, the ACA has expanded access by guaranteeing coverage of contraceptive methods, services and counseling without cost-sharing. (Medicaid has long provided robust contraceptive coverage for enrollees, and recent federal guidance may further improve that coverage going forward.)

To better understand how these changes are playing out across the nation’s family planning safety net, the Guttmacher Institute tracked the provision of family planning services and payment type at a group of Title X–supported health centers from 2013 through 2015. Participating sites provided quarterly data on two indicators: the number of visits for family planning services and whether those visits were paid for with public insurance, private insurance or no insurance. Because the first few months of 2014 were a transition period, the analysis compares data for the last three quarters of each year.

We obtained data from 28 health centers for the entire 2013–2015 timeframe. The group included sites operated by different types of public and nonprofit agencies. They are located in 19 states throughout the country, including some that have expanded Medicaid eligibility under the ACA and some that have not. (An initial analysis reviewed data from 32 sites from 2013 through 2014; however, complete data for 2015 could not be obtained from four of those original sites.)

This small-scale investigation shows that safety-net family planning centers continue to serve as a vital source of care. In the last three quarters of 2015, the 28 sites collectively provided 32,689 family planning visits, 5% fewer than the 34,448 visits provided by the same sites during the last three quarters of 2013. This appears to continue a trend among Title X–funded centers that predates the ACA’s major coverage expansions: Between 2010 and 2013, the number of clients served at Title X sites nationwide declined at least 4% each year.

Indeed, a number of factors unrelated to the ACA likely contributed to the small decline. First, the increasing use of long-acting reversible contraceptive (LARC) methods has decreased the frequency with which many women need to visit family planning centers, even as it may mean a higher level of contraceptive protection. Second, updated clinical guidelines no longer recommend cervical cancer screening for many teens and young adults and call for less frequent screening for adults. Third, funding cuts and restrictions on the public funding streams that support safety-net family planning centers, including Title X, may force centers to limit their client volume. Finally, local-level factors, such as difficulty in recruiting and retaining qualified staff or in implementing new technologies such as electronic health records, may further compromise centers’ capacity.

Data from the 28 sites show that family planning clients are increasingly able to use insurance coverage for their care since the ACA coverage expansions began in 2014. Most notably, the proportion of visits paid for by private insurance at the 28 sites rose from 14% in the last three quarters of 2013 to 22% in in the same period of 2015 (see chart). Among individual sites, 23 of 28 saw some increase in the proportion of privately insured visits; 17 had a large increase of at least five percentage points and 10 had an increase of more than 10 percentage points. 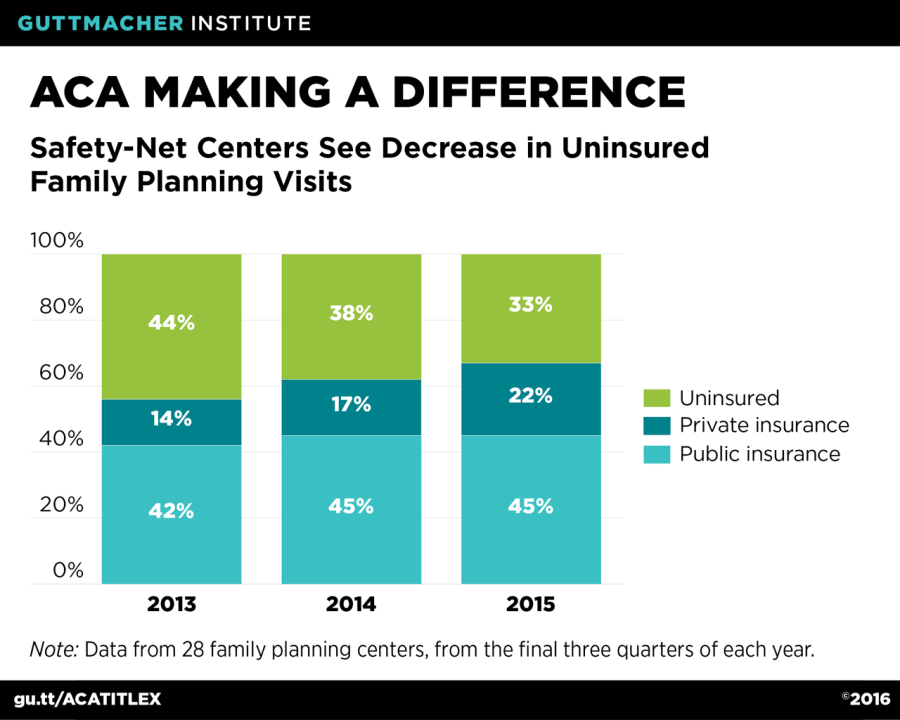 Although the overall proportion of visits paid for by Medicaid rose after ACA implementation, the increase was considerably smaller than the increase in visits paid for by private insurance. Across participating sites, Medicaid paid for 42% of all visits in the last three quarters of 2013, compared to 45% in 2015. Sixteen sites saw some increase in the proportion of visits covered by Medicaid; twelve experienced an increase of at least five percentage points, and among these, six sites had an increase of at least 10 percentage points.

Notably, from the last three quarters of 2013 to the same period in 2015, the proportion of visits at all participating sites for which no insurance was billed fell from 44% in 2013 to 33% in 2015. Among individual health centers, 20 of the 28 reported a decrease in the proportion of uninsured visits. Nineteen sites saw their uninsured visits fall by at least five percentage points, and 11 of these saw decreases of at least 10 points. Nonetheless, all 28 family planning sites continued to serve considerable numbers of clients who had no source of third-party reimbursement for their visit.

However, a significant number of women remain uninsured, likely due to a number of factors. For example, millions of immigrants remain ineligible for insurance coverage based solely on their immigration status. Other people, especially those with lower incomes who live in states without Medicaid expansion, continue to be unable to afford coverage, while still others may be deterred by the sheer difficulty of navigating the health insurance system.

This reality highlights the enduring need for the nationwide network of safety-net family planning providers. It also demonstrates yet again the important role of the flexible funding provided by Title X. These grants help family planning centers provide affordable care to clients who are uninsured or unable to use their coverage for confidentiality reasons. Plus, Title X funds enable many sites to keep the lights on, ensure supply cabinets are stocked, implement technological upgrades necessary for integration into current health care systems, and provide staff the training and time needed to deliver the highest quality care.

The considerable numbers of uninsured people coming through the doors of family planning centers also highlights an ongoing opportunity for these providers to help connect clients to coverage for which they may be eligible. Many safety-net family planning providers have engaged in outreach and enrollment assistance efforts over the last few years; given the number of uninsured individuals among the communities they serve and their positions of trust in those communities, it is imperative that these efforts continue.

This research was supported by the Office of Population Affairs, U.S. Department of Health and Human Services, under grant FPRPA006058. The views expressed are those of the Guttmacher Institute and do not necessarily reflect the official policies or positions of the funder.