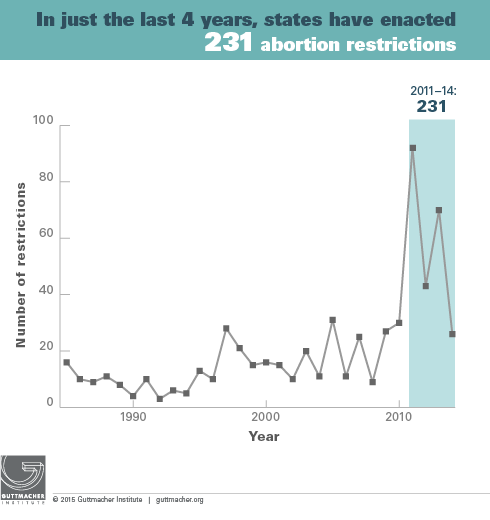 Bucking this tide, legislators in 17 states introduced 95 measures designed to expand access to abortion, more positive measures than in any year since 1990. Of these, four were signed into law: two provisions established buffer zones around abortion providers in Massachusetts and New Hampshire; the third repealed the pre-Roe abortion ban in Vermont; and the fourth eased counseling requirements for women seeking an abortion because of a fetal impairment in Utah. Moreover, on Election Day, voters in Colorado and North Dakota rejected ballot initiatives that would have conferred personhood on a fertilized egg by a two-to-one margin, even as voters in Tennessee approved an initiative expanding legislators’ authority to restrict abortion. States also took positive steps on other sexual and reproductive health and rights issues, enacting provisions requiring insurance coverage of all FDA-approved contraceptive methods with no cost-sharing in California; protecting confidentiality for individuals insured as dependents in Maryland; and allowing STI treatment for a patient’s partner in the District of Columbia. 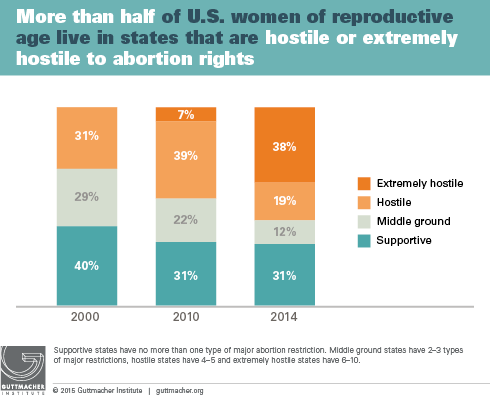 The 26 abortion restrictions enacted in 2014 represent a significant decrease from the 70 that were enacted in 2013. Several factors likely contributed to this decline. First, legislatures in four states (Montana, Nevada, North Dakota and Texas) are not in session in even-numbered years, which are also election years; together, these four states enacted 15 restrictions in 2013. Second, election-year legislative sessions are typically several weeks shorter than sessions in non-election years. Finally, abortion increasingly competes for legislative time with other issues, including the minimum wage and the common core educational standards.

Nonetheless, the midterm election results provide good reason to be concerned about a renewed focus on restricting abortion in the upcoming 2015 legislative sessions. Republican legislators, who overwhelmingly oppose abortion rights, solidified their dominance in the states. Republicans will now control both legislative chambers in 30 states, three more than in 2014; in 23 of those states, the governor will also be Republican. Democrats will control both legislative chambers and the governor’s mansion in only seven states. In addition, the ballot initiative approved in Tennessee likely will open the door to additional restrictions in that state.

Significantly, all major action on family planning and related services in 2014 involved attempts to expand access to needed care and services:

Inclusion of information about either contraception or abstinence was not a major issue in state legislatures in 2014. Instead, nine states (CA, CT, LA, MA, NM, PA, RI, SC and UT) enacted measures related to education on sexual assault awareness and prevention. Including these new provisions, 20 states and the District of Columbia require that sex education include information about skills for avoiding coerced sex (see Sex and HIV Education).