Medication abortion is a safe and effective method of abortion that can be completed outside of a medical setting—for example, in the comfort and privacy of one’s home. Now, new data from the Guttmacher Institute reveal that even as overall abortion numbers continue to decline, the use of medication abortion in the United States continues to grow. In 2017, the number of early medication abortions provided in clinical settings rose to approximately 340,000, an overall increase of 25% from 2014.

Medication abortion has been transforming the provision of care since it was first approved by the Food and Drug Administration in 2000, and the latest data confirm that it continues to represent an increasingly significant proportion of all U.S. abortions, accounting for 39% in 2017. In fact, it is now the most common method used for abortions up to 10 weeks’ gestation, accounting for 60% of all such abortions in 2017. 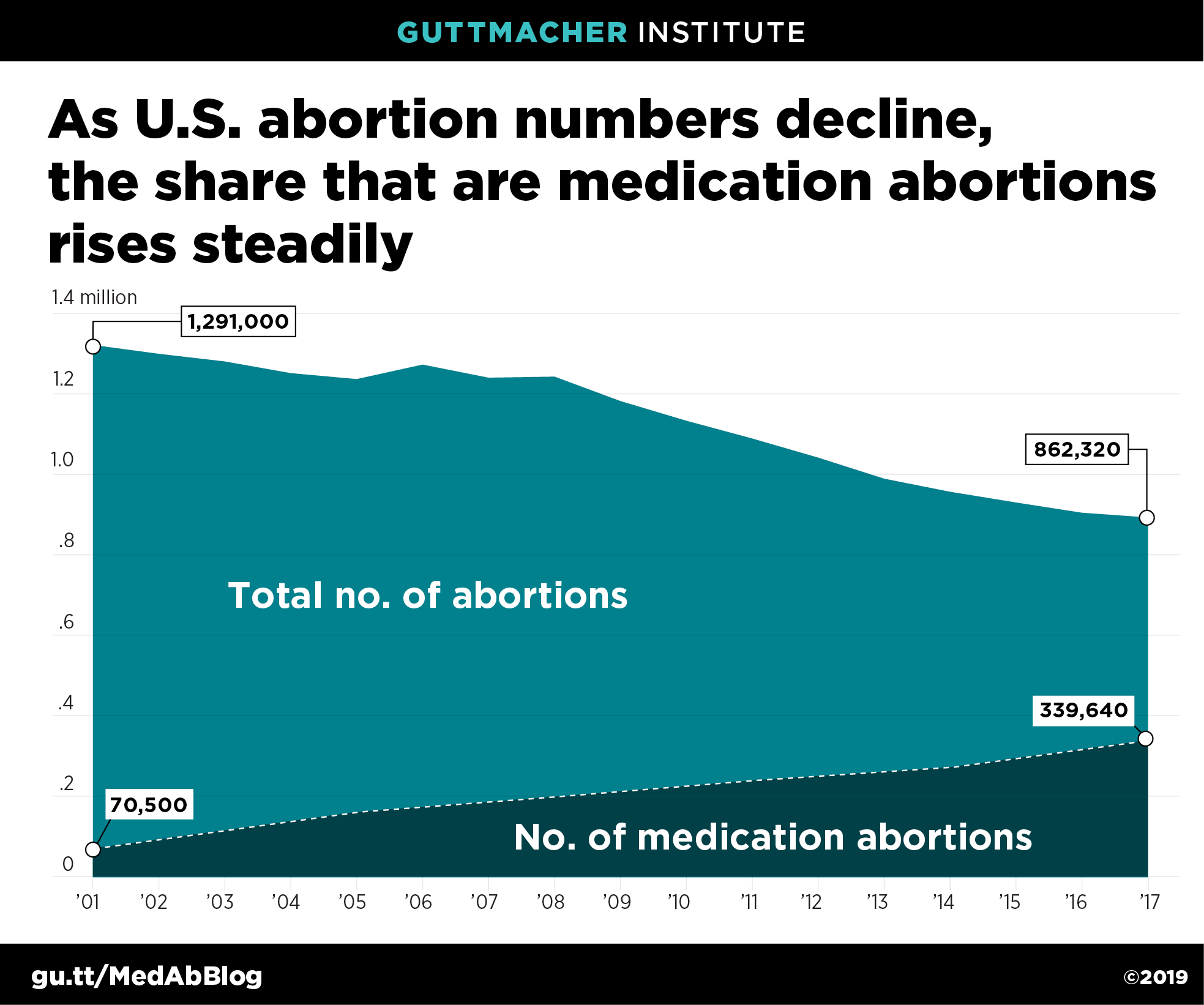 The transformative power of medication abortion is not limited to numbers; it is also part of a changing landscape of abortion care. A prime example is the growing provision of abortion via telehealth, which allows abortion providers to extend care to new and underserved communities using remote technology. Taking advantage of the simplicity and convenience of medication abortion, telehealth abortion models have allowed abortion care to evolve alongside the broader health care industry and have reduced barriers related to travel, staffing and infrastructure. Yet, current federal and state restrictions on medication abortion place limits on the reach of telehealth, so there is significant untapped potential that could be realized through proactive policy changes.

Medication abortion also offers a safe and effective option for people who decide to self-manage their abortion care: It is more than 95% effective and expected complications are similar to those of a miscarriage. While self-managed abortion is not a new phenomenon, it may be becoming more common in the United States: In 2017, 18% of nonhospital facilities offering abortion reported that they had seen one or more patients seeking care after self-management, compared to 12% in 2014. Advocates and researchers expect the number of people self-managing their abortions to continue to grow, and medication abortion will undoubtedly be a big part of that story.

Despite this progress, there are significant challenges and gaps in knowledge to overcome before these developments can fully and equitably reach their true potential.

For example, abortion stigma is heightened when it comes to self-managed abortion, and in the years since Roe v. Wade, people have sometimes been prosecuted under state statutes for self-management. Moreover, given the broader societal context of discriminatory law enforcement, people of color, low-income individuals and immigrants are at higher risk of being criminalized than others if they pursue self-management. As policymakers and advocates work toward a future that more fully supports self-managed abortion, it is critical to ensure that people who self-manage are not punished.

In addition, more research is needed to fully contextualize the ongoing increase in the number of medication abortions. As the incidence of medication abortion has gone up, so too has the number of clinics that provide only medication abortion. While this trend could represent an overall gain in access—some abortion care where there might otherwise be none—it could also mean that some providers are shifting away from providing other options. Perhaps most significantly, it could also mean that medication abortion is the only option available in some areas of the country. As advocates and policymakers work to identify policies and practices that protect and expand access to abortion, it is important to strive for policies that ensure access to the full range of safe and effective methods, and to consider the ethical implications of a system that falls short of that goal.