This analysis, originally published in June 2022, shared pre released data from Guttmacher’s census of all known abortion providers. The full paper with additional findings was published on November 20, 2022, and is available here.

The long-term decline in abortions in the United States that started 30 years ago has reversed, according to new data from the Guttmacher Institute—underscoring that the need for abortion care in the United States is growing just as the US Supreme Court appears likely to overturn or gut Roe v. Wade.

According to new findings from Guttmacher’s latest Abortion Provider Census—the most comprehensive data collection effort on abortion provision in the United States—there were 8% more abortions in 2020 than in 2017. 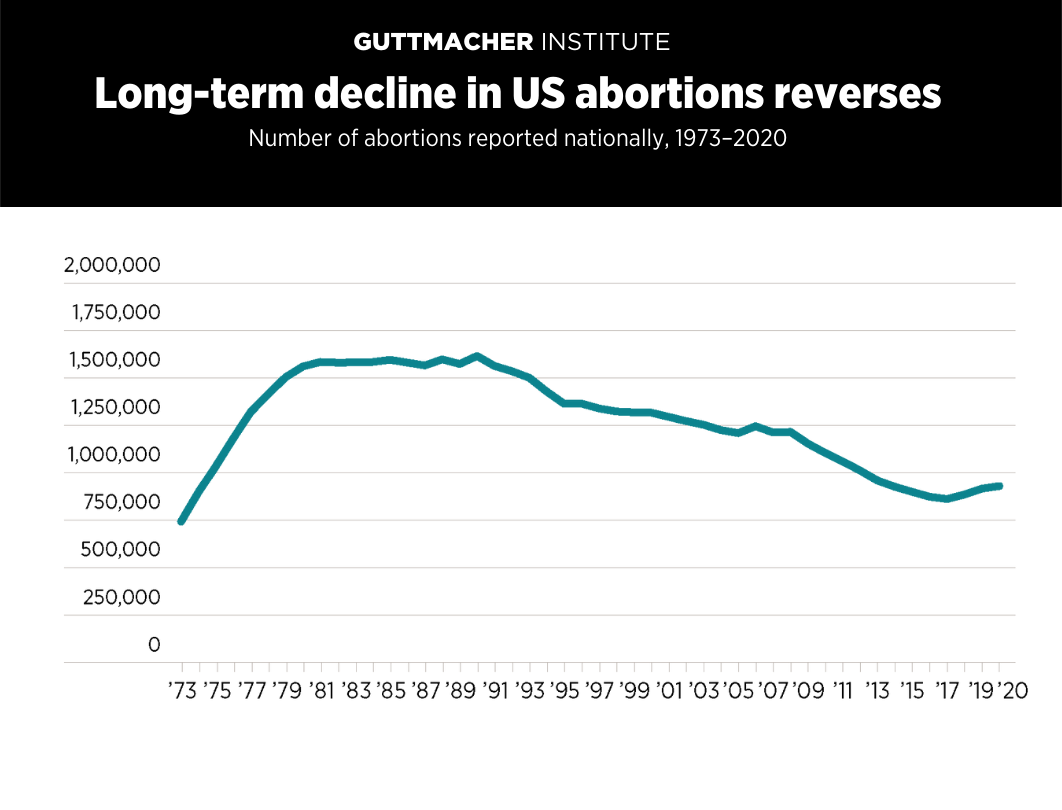 A recently leaked draft of the Supreme Court majority opinion in Dobbs v. Jackson Women’s Health Organization would explicitly overturn Roe and 50 years of the Court’s own legal precedent upholding the constitutional right to abortion. States have been ramping up their attacks on abortion rights and access in anticipation of the Court’s decision, and 26 states are certain or likely to quickly ban abortion without Roe. People with very few resources and those who are already marginalized bear the brunt of abortion bans and other restrictive policies.

An increase in abortion numbers is a positive development if it means people are getting the health care they want and need. Rather than focusing on reducing abortion, policies should instead center the needs of people and protect their right to bodily autonomy.

The new data released by Guttmacher include several notable trends (see table with abortion incidence and rates by state and region):

Interpreting the Overall Increase in Abortion

While abortion increased nationally, there was substantial variation across, and even within, states between 2017 and 2020. A number of developments over that period may have had differential impacts across states.

Abortion trends varied across states between 2017 and 2020 and there were no clear patterns to explain why some had increases or decreases.

Below, we highlight a few states and offer policy context that may have contributed to recent changes in their abortion numbers.

The Supreme Court is poised to overturn Roe v. Wade at a time when need for abortion care has been increasing—including in many of the 26 states likely to ban abortion following the Court’s official decision on the Mississippi case. This means the impact of the ruling could be even more devastating than predicted by prior analyses, particularly for people across the country who already struggle to access abortion care.

Every three years, the Guttmacher Institute contacts all known facilities providing abortion in the United States to collect information about service provision, including total number of abortions. The most recent Abortion Provider Census was completed in May 2022, and data represent 1,687 health care facilities that provided abortions in 2019 or 2020.

Fifty-two percent of facilities provided responses to our questionnaire or by phone or email when contacted for follow-up. We were able to use state health department data to determine the number of abortions provided at 17% of facilities and the total number was estimated for the remaining 31%. Notably, most of the facilities for which we had to make estimates were hospitals, which typically perform only a small number of abortions annually. In total, 84% of the abortions we counted were based on information provided by health care facilities directly.

Our counts only include provision of abortion overseen by clinicians and do not account for self-managed abortion.

Pregnancies include births and abortions but do not include miscarriages.

See here for a table with abortion incidence and rates by state and region. A fuller summary of the data will be published later this year in a peer-reviewed journal article.