Even Before Roe Was Overturned, Nearly One in 10 People Obtaining an Abortion Traveled Across State Lines for Care

The US Supreme Court’s decision in Dobbs v. Jackson Women's Health Organization, which overturned Roe v. Wade, represents a dramatic shift in abortion provision and access in the United States. Recent and newly released data collected by the Guttmacher Institute can be used to understand this landscape—including the extent to which abortion patients were traveling across state lines to obtain abortion care—before both the Dobbs ruling and the enforcement of a number of major state abortion restrictions in 2021 and 2022 (including a six-week ban in Texas and a total ban in Oklahoma).

Below, we provide a brief description of interstate travel for abortion care in 2019 and 2020 and a guide to understanding two key measures of abortion incidence in the United States: abortions by state of occurrence and abortions by state of residence. Together, these measures describe abortion provision and access in 2019 and 2020 and provide the context for understanding current shifts and future changes.

In 2020, 9% of abortions in the United States (81,120 out of 930,160) were obtained by people traveling out of their state of residence. Estimates for 2020 provide a baseline of interstate travel for abortion care just before major shifts in the abortion rights and access landscape took place in 2021–2022.

In the decade prior to 2020, the proportion of abortion patients traveling out of state to obtain care rose steadily, from 6% in 2011 to 9% in 2020. This increase corresponded with the enactment of a record-breaking number of state abortion restrictions over the same period. The main driver of the increase was the larger number of people traveling out of states with highly restrictive abortion laws: 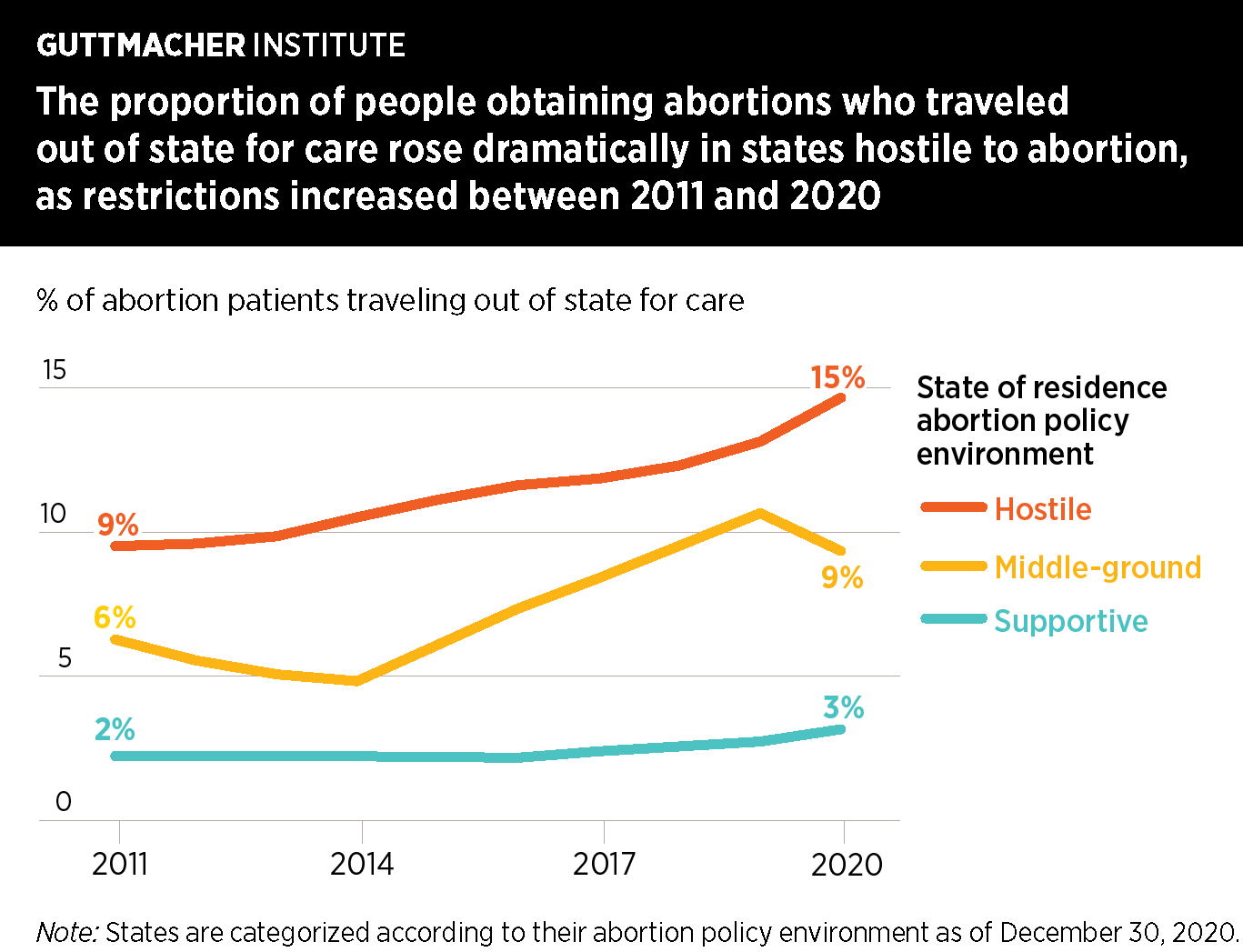 Comprehensive data after 2020 are not yet available, but it is clear from anecdotal evidence and early research reports that the increased number and extent of restrictions are forcing many more people to travel out of state for abortion care. In fact, many of the states to which patients historically traveled to obtain abortions have now restricted or eliminated access entirely, which means people seeking care will have to travel even farther to obtain it. In the 26 states considered certain or likely to ban abortion in the wake of the Supreme Court’s decision, 15% of residents obtaining abortions traveled out of state for care in 2020; of these 15%, almost half (46%) traveled to states that have now banned or severely restricted abortion or are likely to do so.

Understanding Abortion Data by State of Residence and State of Occurrence

These new estimates of travel for abortion care also allow us to calculate the number and rate of abortions obtained by residents of each US state. Abortions by state of residence and abortions by state of occurrence can both be used to track trends in abortion incidence, access and provision; they differ, however, in what they are trying to measure and the purposes they should be used for.

Abortions by state of occurrence are abortions provided in a given state, whether to residents of that state or to people who traveled to that state for care. In contrast, abortions by state of residence are abortions obtained by residents of a given state, regardless of where they took place. Both of these numbers are often presented as rates: the number of abortions relative to the population of residents who could experience pregnancy (e.g., the number of abortions per 1,000 resident women aged 15–44 in each state).

Abortion rates by state of residence can be used to:

Abortion rates by state of occurrence can be used to:

Rates of abortion by state of residence and by state of occurrence are similar in some states but very different in others. For instance, these rates differ widely in Missouri, a state with highly restricted access to abortion where almost all residents obtaining an abortion traveled out of state in 2020. The abortion rate by state of occurrence for Missouri dropped from 4.0 per 1,000 women aged 15–44 in 2017 to 0.1 in 2020. However, the rate of abortions to residents actually increased 18% between 2017 and 2020, from 8.4 to 9.9 per 1,000 women aged 15–44. In other words, underlying the change in the occurrence rate was a substantial decrease in the provision of abortion services in Missouri and a concurrent increase in the proportion of residents traveling out of state (from 57% in 2017 to 99% in 2020). The change in the number of residents who were able to obtain an abortion is reflected only in the abortion rate by state of residence.

Differences between abortion rates by state of residence and state of occurrence are not only relevant for states with highly restrictive abortion policies. In some states, the geographic location of population centers likely plays a role in where people seek care. In Delaware, for example, there were relatively few restrictions on abortion access in 2019 and 2020. Even so, residents of the three largest cities (Wilmington, Dover and Newark) live near other states’ borders and may seek care in neighboring states. In 2019 and 2020, 43–44% of Delaware residents obtaining abortions traveled out of state to receive care: The majority of these residents traveled to Pennsylvania, New Jersey and Maryland. As a result, the abortion rate by state of residence in Delaware (15.8 per 1,000 women aged 15–44 in 2020) is substantially higher than the rate by state of occurrence (10.0).

In other states, both restrictive policies and geography may lead abortion patients to travel across state lines. For example, in South Carolina, more than half of residents obtaining abortions traveled out of state to receive care (59% in 2019 and 57% in 2020). However, a majority of these residents traveled to Georgia and North Carolina, which also had restrictions on abortion access. For some people, this was likely because the closest clinic was across state lines. 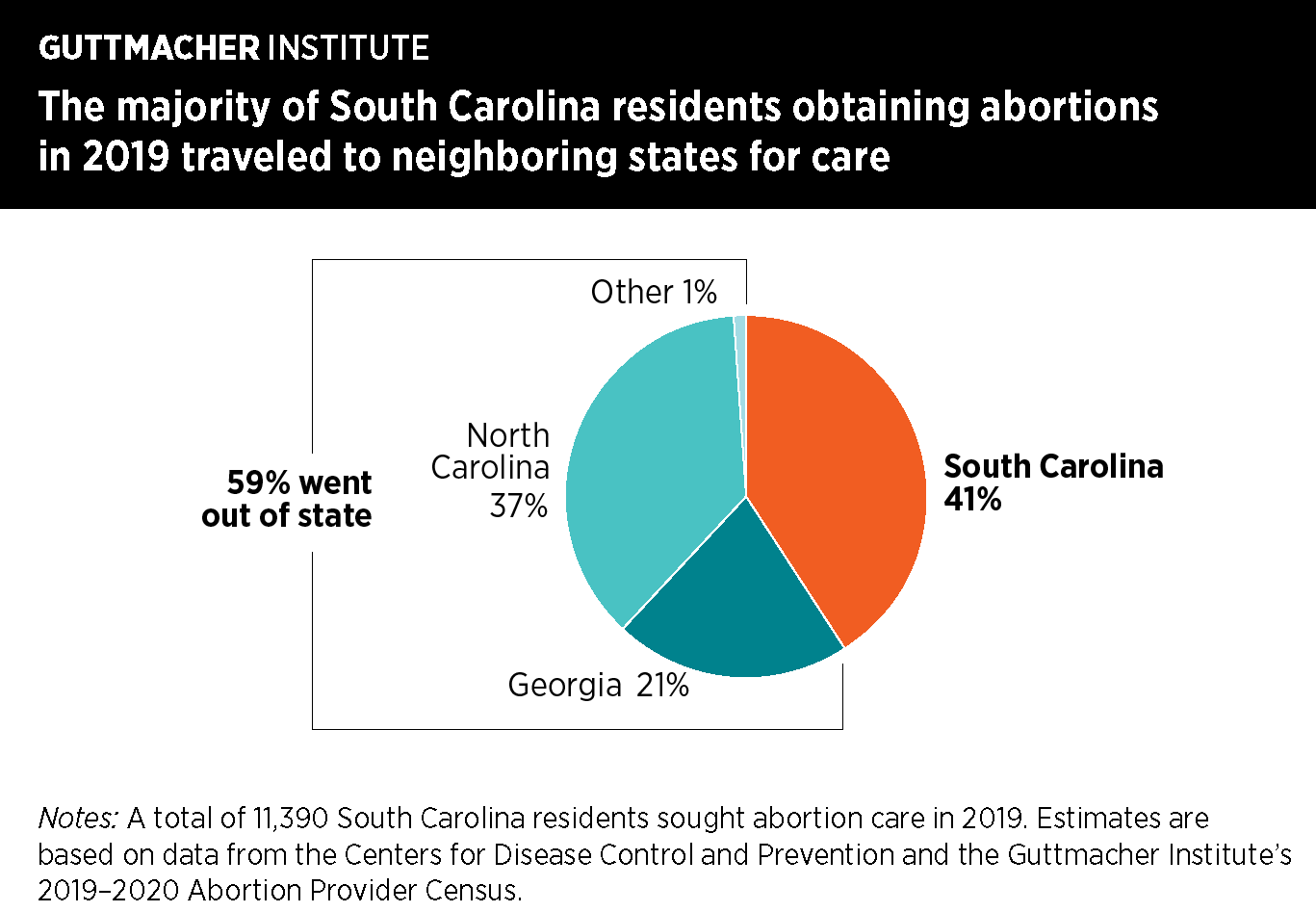 Numbers and rates of abortion by state of residence and by state of occurrence should be examined together, with consideration given to a particular state’s policy context, the geographic distribution of the state’s population in relation to that of neighboring states and the constraints that individuals must navigate to access abortion care.

As more states restrict abortion access, more people in those states will likely seek care in states supportive of abortion rights; consequently, numbers and rates of abortions by state of residence and by state of occurrence will diverge more sharply. It will be increasingly important that researchers, policymakers and journalists carefully use the measure of abortion incidence that best fits their needs.

The landscape of abortion provision and access varies widely among states, and new state-level restrictions are likely to deepen inequities in access to care. Data on the state to which residents travel for abortion care when they cannot get it in their own state will be critical to understanding how restrictions on access to abortion impact the people who need and want this care.

Estimates of numbers and rates of abortions by state of residence and occurrence, as well as the proportion of residents obtaining abortion who traveled out of state, are publicly available in the Guttmacher Data Center. In addition, estimates of detailed state-specific travel patterns for 2019 produced using public data from the Centers for Disease Control and Prevention (CDC), combined with data from the Guttmacher Institute’s Abortion Provider Census, are available at https://osf.io/ymgvz/.*

Starting with the number of abortions performed in each state (abortions by state of occurrence), as estimated by the 2019–2020 Abortion Provider Census, we reassigned abortions to the patients’ state of residence on the basis of information collected by state abortion reporting agencies. The CDC compiles this information in an annual table showing the state of residence for each individual who had an abortion in a given state. The most recent data available from the CDC are for abortions in 2019. We supplemented CDC information with more-complete data available from many state health department websites and, as necessary, contacted the states directly for this information. Some states do not collect this information or provide limited data to the CDC; for these states, we used data collected directly from abortion facilities on patients’ state of residence. The data set of state-specific travel patterns for 2019 uses data from the CDC combined with data from the Abortion Provider Census; it does not incorporate any data directly requested from health departments because of data restrictions.

As we did for 2019, we reassigned abortions to patients’ state of residence on the basis of information collected by state abortion reporting agencies. Because the CDC has not yet released compiled data for 2020, we used data provided to us directly from state health departments (or that are publicly available on state health department websites). For states that do not collect this information or were unable to provide it to us, we used data collected directly from abortion facilities on patients' state of residence.

*State-specific data on travel patterns are not yet available for 2020.

Maddow-Zimet I and Kost K, Even before Roe was overturned, nearly one in 10 people obtaining an abortion traveled across state lines for care, New York: Guttmacher Institute, 2022, https://www.guttmacher.org/article/2022/07/even-roe-was-overturned-near….

This report was prepared by Isaac Maddow-Zimet and Kathryn Kost, both of the Guttmacher Institute. It was edited by Peter Ephross and Haley Ball. Research support was provided by Ashley Little. Aletha Akers, Heather Boonstra, Joerg Dreweke, Rachel Jones, Kimberley Lufkin, Elizabeth Nash and Maibe Ponet provided comments and suggestions. The Guttmacher Institute gratefully acknowledges the unrestricted funding it receives from many individuals and foundations—including major grants from the William and Flora Hewlett Foundation and the David and Lucile Packard Foundation—which undergirds all of the Institute’s work.