States continued their assault on abortion in 2017, with 19 states adopting 63 new restrictions on abortion rights and access. That total is the largest number of abortion restrictions enacted in a year since 2013. In addition, Iowa, Kentucky and South Carolina all moved to restrict public funding for family planning programs and providers in 2017, bringing to 15 the number of states that have taken aim at the family planning safety net since the 2015 release of a series of deceptively edited videos seeking to discredit Planned Parenthood.

Even as the assault on sexual and reproductive health and rights continued, 2017 may be most notable for a dramatic upsurge in proactive efforts to expand access to abortion, contraception, other reproductive health services and comprehensive sex education or to protect reproductive rights. During the year, 21 states adopted 58 new proactive measures, a sharp increase from the 28 enacted in 2016. The new measures adopted in 2017 include 12 on abortion, 35 on contraception and 11 on issues such as sex education. 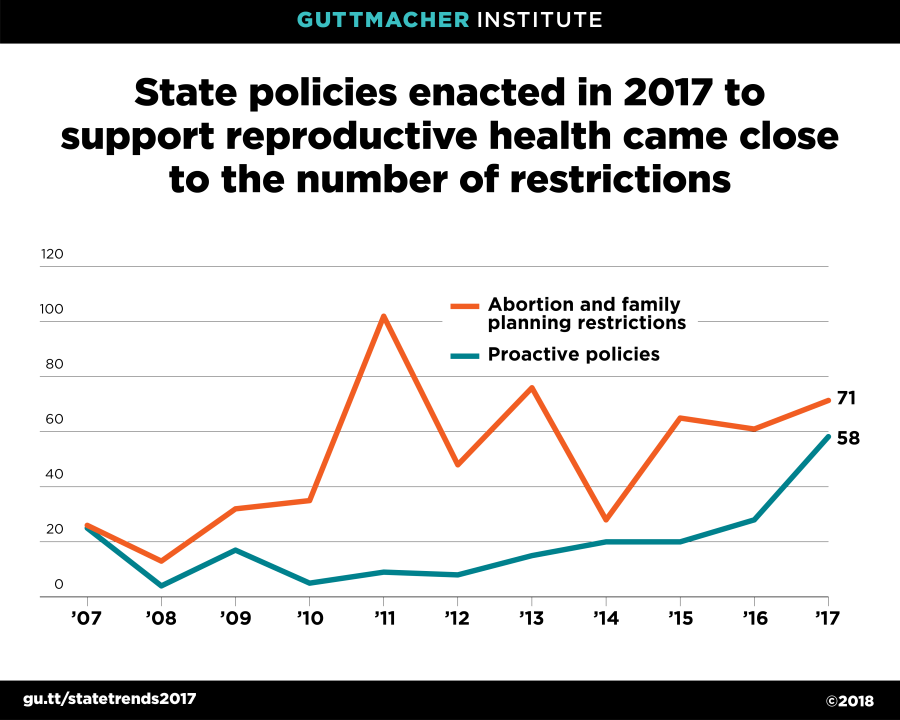 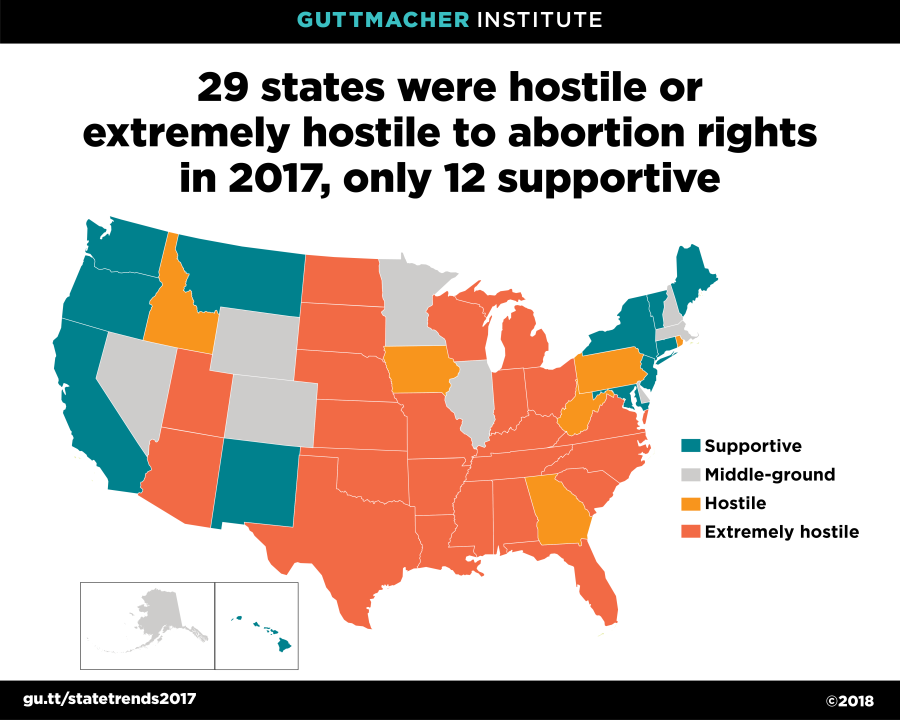 Against a national backdrop of policymaking that often appears to willfully ignore clear and compelling data, it is important to note that 17 states have laws on abortion that match at least five of 10 major categories of restrictions that conflict with scientific evidence.[2] Kansas, South Dakota and Texas top the list with restrictions in eight of these categories; Louisiana and Oklahoma each have seven. An additional 12 states have 2–4 of these types of restrictions, and so are considered in moderate conflict with the science (see Flouting the Facts: State Abortion Restrictions Flying in the Face of Science). Only 21 states have laws that pose no or limited conflicts with scientific evidence. 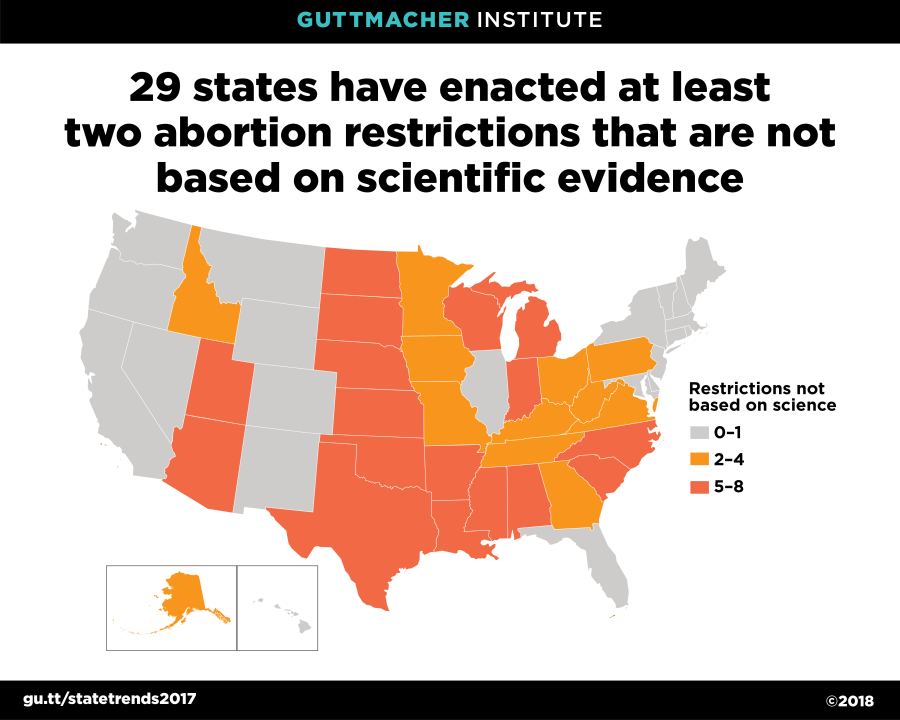 Moves to ban some or all abortions garnered significant legislative attention in 2017. Over the course of the year, legislators in 30 states introduced abortion bans, with six states enacting new laws. Iowa and Kentucky adopted measures to ban abortion at 20 weeks postfertilization (equivalent to 22 weeks after a woman’s last menstrual period); by year’s end, 18 states had such bans in effect (see State Policies on Later Abortion). In addition, Tennessee enacted a law that bans abortion after viability except when the woman’s life is endangered or if there is "substantial and irreversible impairment of a major bodily function." Arkansas and Texas banned the use of dilation and evacuation (D&E), a common and medically proven method of abortion used after 12 weeks of pregnancy; neither law is in effect because of pending litigation. Out of the eight laws that have been enacted seeking to ban D&E abortions, only those in Mississippi and West Virginia are in effect (see Bans on Specific Abortion Methods Used After the First Trimester). Arkansas also banned abortion for purposes of gender selection. Currently seven states have such bans in effect; the Arkansas measure takes effect in 2018 (see Abortion Bans in Cases of Sex or Race Selection or Genetic Anomaly). Finally, Ohio enacted a law that bans abortion when a fetus has or is suspected of having Down syndrome; the new ban takes effect in 2018. Currently only North Dakota has a law in effect that bans abortion on the basis of fetal genetic anomaly.

In addition, states adopted a wide range of other abortion restrictions:

However, as new restrictions were becoming law across the country, governors in three states vetoed abortion restrictions. Minnesota Gov. Mark Dayton (D) vetoed legislation that would have imposed unnecessary and burdensome regulations on abortion clinics. Gov. Dayton also vetoed a bill intended to limit Medicaid reimbursement for abortion to cases of life endangerment, rape or incest (currently the state is court ordered to pay for all medically necessary abortions for Medicaid enrollees). Montana Gov. Steve Bullock (D) vetoed a ban on abortion at 20 weeks postfertilization and a restriction on postviability abortions. In December, Pennsylvania Gov. Tom Wolf (D) vetoed a measure that would have banned abortion at 20 weeks postfertilization, banned use of the D&E abortion method and required in-person abortion counseling (thereby requiring a patient to make two trips, one for the counseling session and one for the abortion procedure).

Both at the federal level and in state capitals, providers of publicly funded family planning services are under assault from policymakers motivated by efforts to shut out providers associated with abortion, especially those affiliated with Planned Parenthood. In 2017, four states found ways to limit certain family planning providers’ eligibility for reimbursement under Medicaid, the federal-state program that contributes 75% of all public funds spent on family planning services nationwide (see Public Funding for Family Planning and Abortion Services, FY 1980–2015).

Including these states, nine states have taken steps to exclude abortion providers from either their full-benefit Medicaid programs or Medicaid family planning expansions since 2011. Arkansas is the only one among these states so far to fully implement a restriction specific to the joint federal-state Medicaid program.

In 2017, three states imposed new restrictions on certain family planning providers’ participation in publicly funded programs beyond Medicaid. Kentucky and South Carolina established an allocation system for distributing family planning funding that disadvantages private providers that focus on reproductive health services; sites operated by health departments and federally qualified health centers receive higher priority. (For the second year in a row, Virginia Gov. Terry McAuliffe vetoed a measure that would have established a similar allocation system.) Arizona now requires the state to compete for funding under the Title X national family planning program; if that application is successful, the state would bar funding for private providers that focus on reproductive health services.

Twenty-one states adopted proactive measures to expand access to reproductive health services or to protect reproductive rights in 2017; notably, this total includes some measures related to abortion, in addition to contraception or other topics. Proactive measures were enacted in states in all regions of the country. Five of these states are considered extremely hostile to abortion rights (Arizona, Indiana, Ohio, South Dakota and Virginia) and three states (Georgia, Idaho and Rhode Island) each have enough abortion restrictions to be hostile to abortion rights. Altogether, 32% of women of reproductive age lived in a state that adopted at least one proactive measure in 2017. 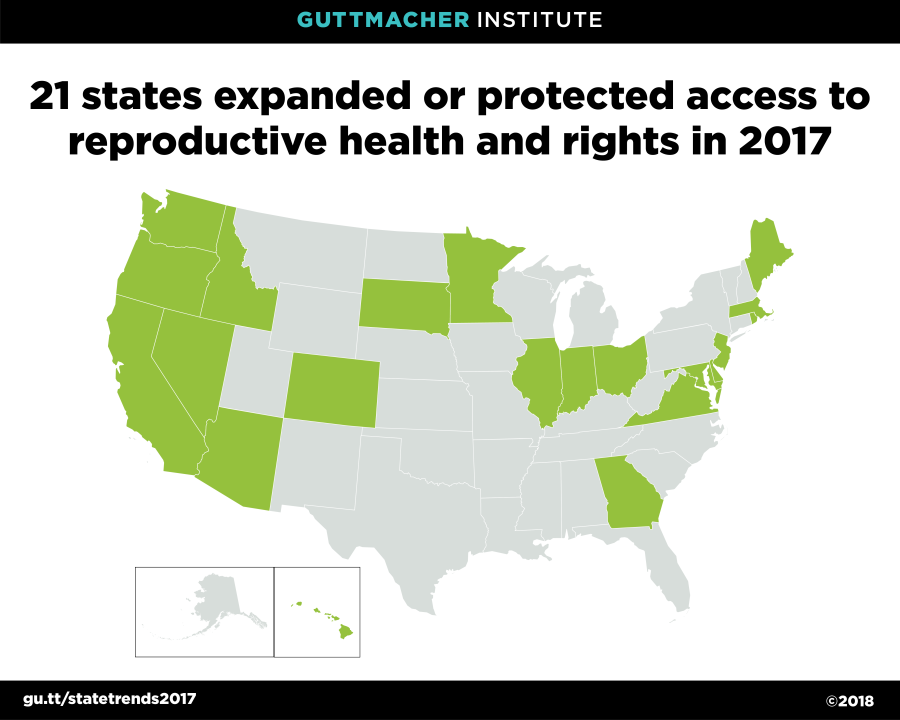 Seven states moved to expand access to other sexual and reproductive health care and education:

[1] States are categorized based on how many of 10 major types of abortion restrictions they have enacted: Requiring parental involvement before a minor’s abortion; mandating medically inaccurate or misleading preabortion counseling; requiring a waiting period after abortion counseling at a clinic, thus necessitating two trips to the facility; mandating a non–medically indicated ultrasound before an abortion; banning Medicaid funding of abortion except in cases of life endangerment, rape or incest; restricting abortion coverage in private health plans; imposing medically inappropriate restrictions on medication abortion; requiring onerous and unnecessary regulations on abortion facilities; imposing an unconstitutional ban on abortion before viability or limits on abortion after viability; and enacting a preemptive ban on abortion if Roe v. Wade is overturned. A state is considered supportive of abortion rights if it has no more than one of these restrictions, a middle-ground state if it has 2–3, a hostile state if it has 4–5 and an extremely hostile state if it has 6–10.

[2] Categories of restrictions that conflict with scientific evidence: Requiring abortion facilities to meet the same regulations as ambulatory surgical centers; requiring abortion providers to have hospital admitting privileges; prohibiting the use of telemedicine to administer medication abortion; restricting types of medical personnel who are allowed to perform abortions solely to physicians; requiring abortion patients to receive counseling about one of three unproven consequences of having an abortion—adverse mental health outcomes, reduced future fertility or increased risk of breast cancer; imposing mandatory waiting periods between required abortion counseling and a patient’s procedure; banning all abortions after 20 weeks postfertilization; and requiring providers to inform women seeking abortion that a fetus is capable of feeling pain at a certain stage of pregnancy.