Medicaid—the joint federal-state health insurance program for low-income individuals in the United States—has long been a favorite target of conservative policymakers, for both fiscal and ideological reasons. The Trump administration and the 115th Congress are considering multiple approaches to restructuring Medicaid that would scale back the program’s funding and scope and strip out important protections for enrollees. If they succeed, the results could be devastating for tens of millions of low-income people who rely on Medicaid as their only affordable source of health care coverage and their gateway to necessary medical care—including sexual and reproductive health services.

Medicaid is an essential source of health coverage. Medicaid today is the largest single health insurance program in the United States, covering 74.2 million people as of December 2016, including 5.5 million people in its companion program, the Children’s Health Insurance Program (CHIP).1 Put another way, Medicaid (along with CHIP) covers 20% of the U.S. population, compared with 14% for Medicare, the federal insurance program for older and disabled individuals.2

Medicaid is critical for women of reproductive age, covering 20% of women aged 15­–44 in 2015, equal to 12.9 million women.3 Its importance has grown substantially in the wake of Affordable Care Act (ACA) implementation, under which 31 states and the District of Columbia have expanded Medicaid coverage broadly for U.S. citizens and long-term legal residents with incomes under 138% of the federal poverty level (see map).4 (The poverty level is currently $20,420 for a family of three.5) In fact, the proportion of reproductive-age women who were uninsured dropped by 45% between 2013 and 2015 in states that expanded Medicaid, compared with a 26% drop in other states.3

Medicaid is particularly important for many vulnerable groups, including poor women and women of color. In 2015, it provided coverage for 48% of reproductive-age women with incomes below the federal poverty line (see chart).3 Black women and Latinas were also more likely than white women to be insured through Medicaid. Unfortunately, another vulnerable group, noncitizens, are often shut out of Medicaid because federal law bars coverage for undocumented immigrants and for immigrants during their first five years of legal residency. 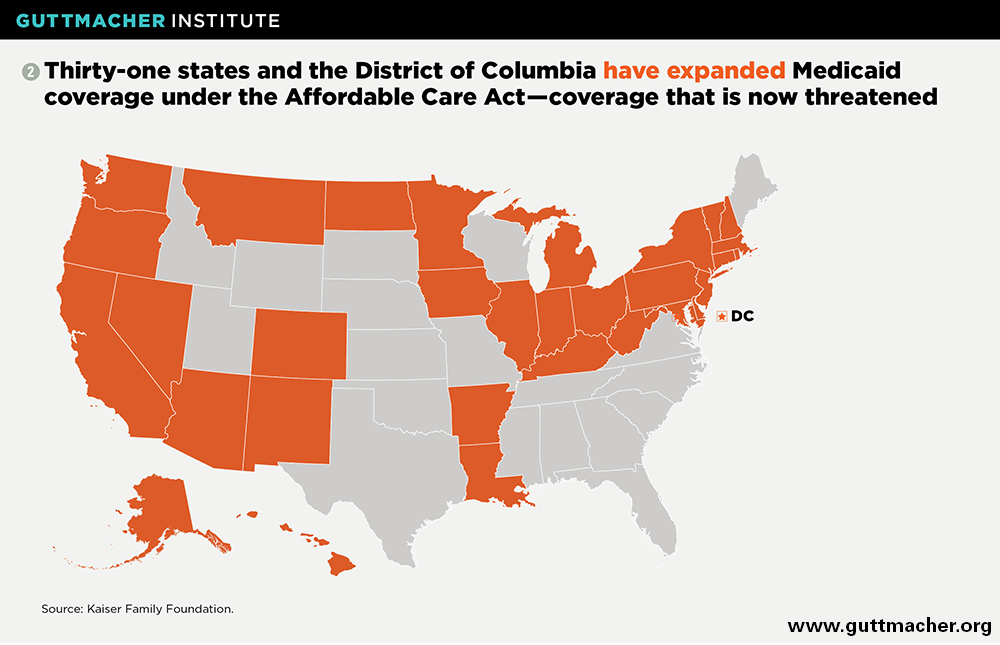 Contrary to the assertions of many conservatives, Medicaid coverage improves enrollees’ access to and use of needed health care and their ability to bear the financial costs of health problems. According to a comprehensive review of the research by the U.S. Department of Health and Human Services (HHS), the expansion of Medicaid has "increased access to primary care, expanded use of prescription medications, and increased rates of diagnosis of chronic conditions for new enrollees."6 Medicaid enrollees also report high levels of satisfaction with their health care coverage, their doctors and the affordability of Medicaid.

Medicaid is central to the U.S. family planning effort. Since 1972, family planning services have been a required part of every state’s Medicaid program and have been afforded special protections. By federal law, Medicaid enrollees must receive family planning care without copayments or other out-of-pocket costs, and federal Medicaid regulations state that enrollees must be "free from coercion or mental pressure and free to choose the method of family planning to be used."7 Guidelines issued in 2016 clarified these protections, for example by explicitly barring policies that would interfere with a patient’s ability to change contraceptive methods (e.g., by refusing to cover removal of an IUD or implant) or force a patient to try a less expensive method before trying the method of her choice.8 The Medicaid statute also guarantees enrollees a free choice of any qualified family planning provider without need for a referral, even if they are otherwise restricted to a specific network of providers.

About half of states have programs that expand eligibility for family planning services to individuals otherwise ineligible for Medicaid.9 These Medicaid family planning expansions were pioneered by states in the mid-1990s as "waiver" programs—experiments that required special permission from the federal Centers for Medicare and Medicaid Services (CMS). Numerous studies have demonstrated that these expansions improve access to care, help women avoid unintended pregnancies and save tens of millions of public dollars.10 As a result, Congress granted states the authority under the ACA to initiate a Medicaid family planning expansion without a waiver.

At last estimate, Medicaid accounted for 75% of all public dollars spent on family planning in the United States.11 This investment is central to the impact of the U.S. family planning effort, which collectively helped women and couples avoid nearly two million unintended pregnancies in 2014.12 By doing so, publicly supported family planning also helps women prevent thousands of preterm and low-birth-weight births, and hundreds of thousands of abortions, unplanned births and miscarriages. That, in turn, has the added benefit of federal and state savings—$13.6 billion in 2010 alone, or $7 saved for every public dollar invested.13

In addition, states provide coverage for pregnancy-related care under Medicaid and CHIP for many women who would otherwise be ineligible for those programs. States typically set their income-eligibility levels for pregnant women at or near 200% of poverty and sometimes much higher.14 States must also cover labor and delivery as a type of emergency care for people who are otherwise ineligible for Medicaid because of their immigration status. Children born in the United States—regardless of their parents’ citizenship—are automatically U.S. citizens, and Medicaid covers their health care as well.

In part because of this extensive coverage, Medicaid at last count covered 51% of all births in the United States.15 And because low-income women have higher rates of unintended pregnancies than women in other income brackets, Medicaid covered 68% of unplanned U.S. births. Without Medicaid, millions of women in the United States would be left without the care they need to protect their health and the health of their infants.

Medicaid is important for other sexual and reproductive health care. Beyond family planning and maternity care, Medicaid also helps patients address health concerns and conditions such as HIV and other STIs, breast and cervical cancer, and intimate partner violence. States are required to cover screening services for these and many other health issue areas for individuals enrolled in Medicaid under the ACA’s coverage expansion, without any copayments, and typically were covering these services for Medicaid enrollees more broadly even before the ACA. In addition, almost every state has expanded Medicaid to cover treatment for uninsured women diagnosed with breast or cervical cancer under the national early detection program (and in some cases, for women diagnosed through other screening programs).16

Abortion is a glaring exception: For four decades, the Hyde Amendment has barred federal dollars from covering abortions for Medicaid recipients, except in cases of life endangerment, rape or incest. Nevertheless, states are permitted to spend their own funds for abortion services. Seventeen states have a policy (either voluntarily or by court order) requiring the state to cover abortion for people enrolled in Medicaid,17 but just 15 appear to be doing so in practice.18 In states where Medicaid does cover abortion, 89% of abortion patients with Medicaid used their insurance to obtain abortion care.19

Attacks on Medicaid will harm sexual and reproductive health. Conservative policymakers are exploring multiple avenues to restructure Medicaid. They see the program as an unaffordable financial burden for the federal and state governments, as a beachhead for universal government-run health insurance, as a font of federal rules constricting state creativity, and as a welfare program stoking dependency and joblessness.

The new CMS chief, Seema Verma, previously worked as a consultant helping states use federal waivers to reshape Medicaid to look more like private insurance. Under her direction, CMS can be expected to grant states additional leeway along these lines (see "How Might State Innovations in Health Reform Affect Sexual and Reproductive Health Care?," 2016). As one example, states might be allowed to waive the "freedom of choice" provision that now protects Medicaid enrollees’ right to receive care from any qualified family planning provider.

Moreover, President Trump and congressional conservatives have made repealing the ACA one of their top priorities, and the ACA’s Medicaid expansion has long been a high-profile target of their wrath. Rolling back that Medicaid expansion—by eliminating it outright, barring new enrollment or cutting federal reimbursement—would leave millions uninsured. It would particularly impact young, low-income adults—precisely the population in greatest need of coverage for reproductive health care.

For years, conservative policymakers have also touted the idea of restructuring the way Medicaid is financed. Currently, the federal and state governments are obligated to provide Medicaid coverage to everyone who qualifies, and federal spending automatically increases when enrollment expands (such as during a recession) and costs increase (such as with the advent of new medical technologies). Budget hawks have long proposed converting the program to a block grant, so that the federal government contributes a fixed dollar amount rather than a proportion of whatever states spend, without any adjustment for increases in enrollment. Conservatives have also discussed an alternative approach that would instead cap federal spending on a per enrollee basis; that approach would adjust automatically for new enrollment costs, but would not adjust in a similar way for other cost increases.

Either approach—both of which have been floated as part of ACA replacement proposals—would be designed to dramatically scale back federal investment in Medicaid. They would do so by limiting the growth in federal spending to some index of inflation that would be lower than the rate at which Medicaid costs are currently projected to rise. In exchange, states would be given additional flexibility in running the program, although the details of what states could do are not yet clear.

With fewer federal resources, a block grant or per capita cap would shift costs from the federal government to the states, and likely from states to patients and health care providers. The end result would be a program that, compared with the status quo, covers fewer people, provides less robust coverage and fewer patient protections, and is less responsive to economic crises, rising costs and changing health care needs.20,21 And depending on the details of the specific legislation, conservative state policymakers would likely gain new authority to target reproductive health services and providers—all to the detriment of the health and well-being of low-income individuals and families.

15. Sonfield A and Kost K, Public Costs from Unintended Pregnancies and the Role of Public Insurance Programs in Paying for Pregnancy-Related Care: National and State Estimates for 2010, New York: Guttmacher Institute, 2015, https://www.guttmacher.org/report/public-costs-unintended-pregnancies-and-role-public-insurance-programs-paying-pregnancy.

17. Guttmacher Institute, State funding of abortion under Medicaid, State Laws and Policies (as of March 2017), 2017, https://www.guttmacher.org/state-policy/explore/state-funding-abortion-under-medicaid.

For Women of Color, Access to Vital Health Services Is Threatened

Public Costs from Unintended Pregnancies and the Role of Public Insurance Programs in Paying for Pregnancy-Related Care: National and State Estimates for 2010