At the same time, states made important advances in 2015 on other sexual and reproductive health and rights issues: 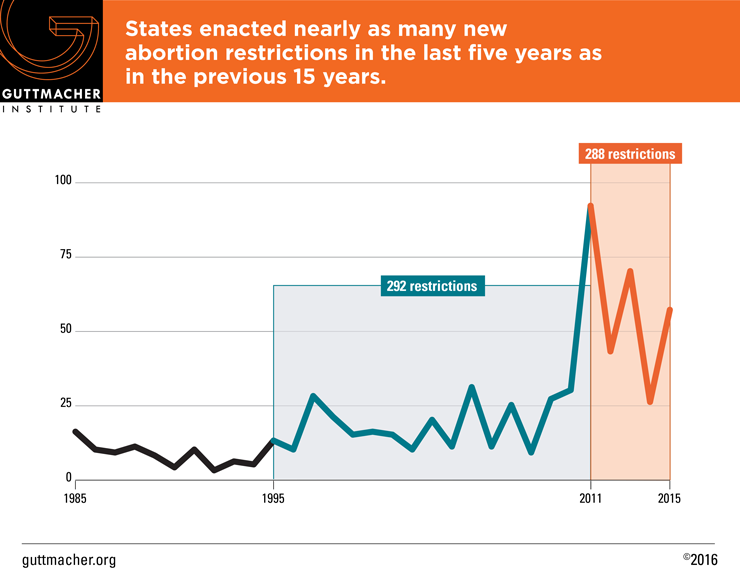 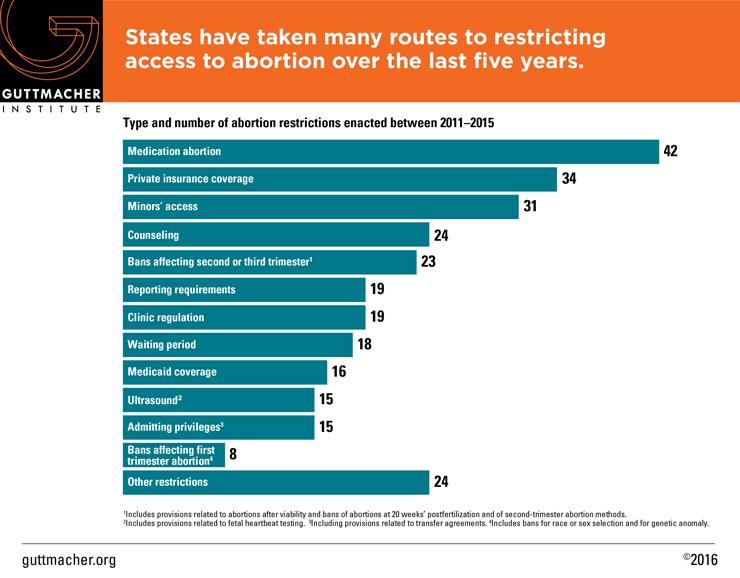 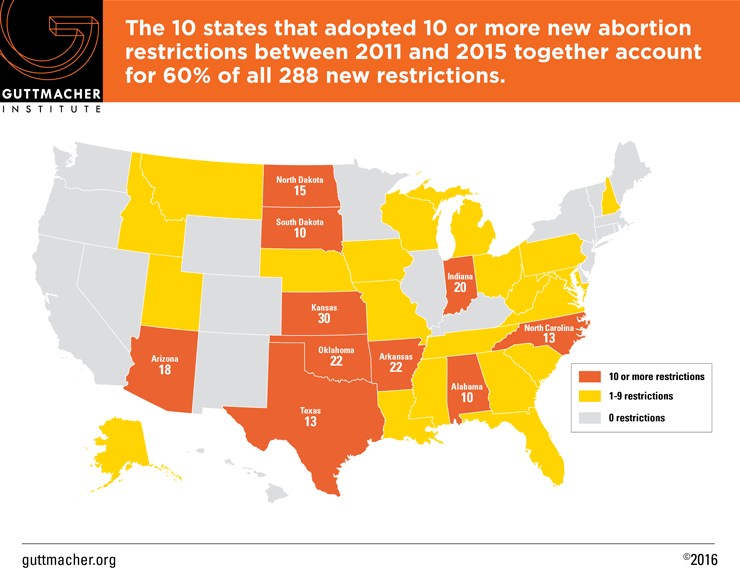 Five states adopted waiting period legislation in 2015. Florida enacted a 24-hour waiting period, while Tennessee approved a measure mandating a 48-hour wait. Three additional states lengthened existing waiting periods: Arkansas extended the mandatory wait to 48 hours; North Carolina and Oklahoma lengthened the time to 72 hours. (The new Florida law has been temporarily blocked by the courts; the Oklahoma law is also being challenged, but a state court allowed it to go into effect while the case is pending.) Including these new laws, 27 states have waiting periods in effect (see Counseling and Waiting Periods for Abortion).

The new laws in Florida and Tennessee require the woman to receive state-mandated abortion counseling in person, meaning that she must make two separate trips to obtain an abortion. With enforcement of the Florida law blocked, 13 states have two-trip requirements in effect.

Four states sought to use longstanding strategies to restrict access to medication abortion. Arkansas, Idaho and Kansas enacted new measures banning the use of telemedicine for the provision of medication abortion. (A similar measure was vetoed in Montana by Democratic Gov. Steve Bullock.) Arkansas also mandated use of the regimen specified in the FDA-approved labeling, which bans use of the newer evidence-based regimen that is less costly, has fewer side effects and can be used several days later in pregnancy; the law is not in effect due to a court case. Currently, 18 states ban use of telemedicine and three mandate use of the older medication abortion regimen (see Medication Abortion).

Arizona and Arkansas debuted a new approach to discouraging a woman from obtaining a medication abortion. Both states adopted laws requiring doctors to counsel women that the abortion could be stopped if the woman takes a high dose of progesterone after receiving the first of the two drugs included in the medication abortion regimen. According to the American Congress of Obstetricians and Gynecologists, this new approach is based on scant scientific evidence; it relies on a single flawed study of only six cases that did not have oversight by an institutional review board. The Arizona law is blocked pending a legal challenge; the Arkansas law is in effect.

Abortion opponents unveiled a new strategy in 2015 by moving to ban the use of the procedure used most often for second-trimester abortions. Kansas and Oklahoma both enacted measures to ban this safe and medically proven method that has long been used for abortions after 14 weeks; both laws are enjoined pending court action.

West Virginia and Wisconsin enacted laws banning abortion at or after 20 weeks postfertilization (which is equivalent to 22 weeks after the woman’s last menstrual period). The West Virginia measure is in effect; the one in Wisconsin is slated to go into effect in February. Currently, 12 states (AL, AR, IN, KS, LA, MS, NE, NC, ND, OK, TX, WV) have similar bans in effect (see State Policies on Later Abortions).

Even as the stage was being set for the U.S. Supreme Court to review TRAP laws (see above), legislative action continued apace in several states. Five states adopted TRAP laws in 2015. Following a 2014 ballot initiative that granted lawmakers the ability to enact virtually limitless abortion restrictions, Tennessee enacted a new TRAP law that requires abortion providers to meet the standards that apply to ambulatory surgical centers even though these centers typically provide more invasive and risky procedures than abortion and use higher levels of sedation than commonly provided in abortion clinics.

Mirroring events in Congress, five states—Alabama, Arkansas, Louisiana, Oklahoma and Texas—took steps to exclude Planned Parenthood from the Medicaid program in 2015. These efforts were blocked by federal courts in Alabama, Arkansas and Louisiana; a challenge was just filed in November in Texas. (The initial Arkansas ruling applied only to the three Medicaid enrollees named in the suit; efforts are underway to expand that injunction to all enrollees in the state.) Similar efforts made by Arizona and Indiana in recent years were also rebuffed by federal courts.

As yet another consequence of the release of the Planned Parenthood sting videos, 10 states moved to regulate either the process for fetal tissue donation or biomedical research conducted in the state using fetal tissue resulting from induced abortions. Fetal tissue research has been integral to many of the major medical advances of our age. For example, fetal cell lines were used in the development of the polio vaccine, a breakthrough for which the 1954 Nobel Prize in Medicine was awarded. In addition, vaccines for diseases such as measles, mumps, rubella, chickenpox, hepatitis A and rabies were all created using cell-line cultures originating from fetal tissue. In short, fetal tissue research has saved and improved the lives of millions of people worldwide.

Get an overview of state legislative and policy activity ​to date.