Numerous reports indicate that the Trump administration is preparing a major attack on sexual and reproductive health and rights in the United States by undermining the federal contraceptive coverage guarantee. A leaked draft of a government-wide executive order to "respect religious freedom" includes a provision directing federal agencies to "immediately" rewrite federal rules to exempt individuals and organizations that object for religious or moral reasons to the Affordable Care Act’s (ACA) Women’s Health Amendment (WHA).1 The WHA requires most private health plans to cover a set of recommended preventive services for women—including coverage for the full range of contraceptive methods, services and counseling—without any out-of-pocket costs for patients, such as copayments and deductibles. The draft order relies on an expansive interpretation of the federal Religious Freedom Restoration Act (see "Learning from Experience: Where Religious Liberty Meets Reproductive Rights," 2016).2

The federal contraceptive coverage guarantee would still stand but would be greatly weakened. It was the health insurance industry norm well before the ACA to cover a wide array of contraceptive services and supplies,3,4 but the ACA’s guarantee made several important advances. First, it established a nationwide, enforceable requirement on most private health plans. Second, it required that women have coverage for 18 contraceptive methods delineated by the U.S. Food and Drug Administration, along with contraceptive counseling and services related to initiation, discontinuation and follow-up.5 Third, it eliminated copayments and other out-of-pocket costs for contraceptive care and limited health plans’ use of other administrative levers to drive patients toward methods that are least expensive for the plan.

The new exemption being prepared by the Trump administration would undermine these protections. It appears to exempt any corporation that asserts a religious or moral objection to abiding by the WHA’s requirements, allowing them to entirely exclude coverage for contraception or other WHA services. This would apply to insurance companies selling health coverage or employers that take on the financial risks of health coverage by self-insuring. It would also apply to employers, schools and even individuals purchasing coverage, allowing them to demand a health plan that excludes this coverage (although insurers are presumably under no legal obligation to sell such a plan). Enrollees in a health plan that excludes contraceptive coverage would have no recourse. By contrast, under the Obama administration’s now-endangered religious "accommodation," insurance companies are required to automatically provide separate coverage for contraceptive care to these enrollees at no additional cost.

Insurance companies and purchasers would be able to use this exemption to deny or limit coverage of some or all contraceptive methods and services—essentially, allowing some plans to revert to their pre-ACA behavior. And that matters, because that pre-ACA behavior served as a barrier to effective contraceptive use. The evidence demonstrates that the federal contraceptive coverage guarantee had driven down costs for tens of millions of women, and may have facilitated women’s ability to choose the contraceptive method that is right for them and use it consistently.6 By doing so, the guarantee has been helping women to plan whether and when to become pregnant and to secure the health, social and economic benefits that follow (see "What Is at Stake with the Federal Contraceptive Coverage Guarantee?," 2017).

State policymakers could help to shore up contraceptive coverage locally. This threat to the federal guarantee should be a wake-up call for policymakers and advocates that state coverage requirements are needed. Currently, 28 states have their own requirements that private insurance plans must cover contraceptive drugs and devices if they cover other prescription drugs (see map).7 Yet, nearly 20 years after Maryland enacted the first such law in 1998, 22 states and the District of Columbia still have not acted. That could—and should—change.

All states could act to ensure that health plans cover the full list of contraceptive methods and services required under the federal guarantee (see chart). That includes several methods that were not included under most of the earlier state coverage requirements, such as female sterilization procedures and many contraceptive products sold over the counter (such as some types of emergency contraception). The federal guarantee—unlike many of the state requirements—also makes explicit distinctions between methods that some insurance plans have wanted to treat as interchangeable (such as hormonal versus copper IUDs, or the contraceptive patch versus the contraceptive ring). In the last few years, four states—California, Illinois, Maryland and Vermont—have established policies along these lines that are already in effect or are slated to take effect in 2018.8 Additional states have been considering action in 2017, including high-profile proposals in New York and Oregon.9,10 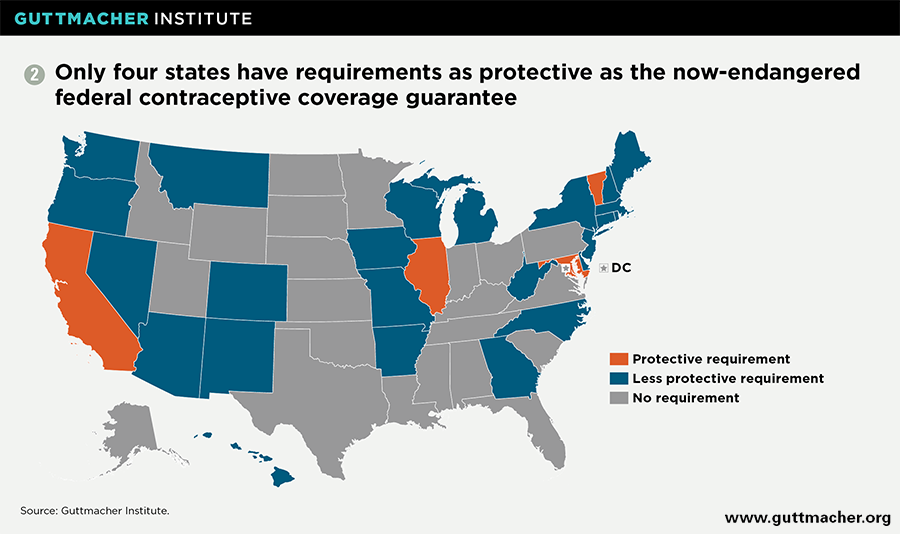 States could also act to protect another major feature of the federal guarantee: its elimination of copayments, deductibles and other out-of-pocket costs. The ACA’s designers were looking to facilitate use of needed medical care by removing these cost barriers for proven preventive services, including contraception. Similarly, the federal guarantee limits health plans’ ability to impose administrative barriers (such as formularies and prior authorization requirements) to the use of contraceptive services and supplies, by making it clear that plans can only work to influence a patient’s choice within a specific contraceptive method (e.g., to favor one hormonal IUD over another) and not across methods (e.g., to favor the pill over the ring). State policymakers could follow the lead of the four states that have already acted and adopt these same protections.8

In fact, states could help close gaps in coverage that have persisted even under the federal contraceptive coverage guarantee. They could require health plans to cover vasectomy and male condoms, in addition to the 18 methods covered for women; Illinois, Maryland and Vermont have already required coverage for vasectomy. States could join Maryland in requiring plans to cover over-the-counter contraception obtained without a prescription; currently, plans may require a prescription for these methods, which negates the advantages of over-the-counter status. And more states could require plans to cover a full year’s supply of contraceptives at one time (rather than just a one- or three-month supply, as is typically the case); so far, California, the District of Columbia, Hawaii, Illinois, Oregon and Vermont have enacted such a requirement. States could go well beyond these measures in their creativity; for example, a proposed Oregon bill would require coverage without cost sharing not only of contraceptive care but also several dozen other reproductive health services, including prenatal care, abortion, and numerous counseling and screening services.

Action at the state level could help improve contraceptive coverage nationwide. One of the key limitations of state laws is their scope: They cannot directly affect plans written in other states or plans offered by employers that self-insure. (Six in 10 covered workers nationwide are in self-insured plans.11) Even so, if enough states were to impose requirements affecting a substantial number of health plans, it could have ripple effects across the entire insurance industry. That very scenario played out before with the first state contraceptive coverage laws enacted in the late 1990s and early 2000s; those laws were a central factor in making contraceptive coverage the industry norm. A 2002 Guttmacher Institute study found that plans designed at the national level by insurance companies operating in states both with and without contraceptive coverage requirements provided coverage everywhere in accordance with the requirements.3,4 These types of ripple effects could affect many self-insured plans as well, since those plans are often administered by the same companies that sell insured plans.

State action could also serve as an important catalyst and model for a broader campaign to protect comprehensive insurance coverage for contraceptive care. The popularity of contraceptive coverage was on clear display in a flurry of news articles immediately after the November 2016 elections that highlighted a rush to get IUDs and implants in anticipation of a rollback of coverage that could make methods unaffordable.12,13 And a 2015 poll from the Washington Post and the Kaiser Family Foundation found that 77% of women and 64% of men support laws requiring health plans to cover the full cost of birth control.14

Advocates and policymakers should seize on that popularity and build on the momentum from new state policies. They should put public pressure on insurance companies and employers to retain full coverage of contraceptive care. And they should set the groundwork for a new federal law to override what would be a harmful and unpopular decision by the Trump administration.

6. Sonfield A, What is at stake with the federal contraceptive coverage guarantee?, Guttmacher Policy Review, 2017, 20:8–11, https://www.guttmacher.org/gpr/2017/01/what-stake-federal-contraceptive-coverage-guarantee.

13. Karlamangla S, Women rush to the doctor for birth control, fearing Trump will limit access to contraception. But will he? Los Angeles Times, Nov. 15, 2016, http://www.latimes.com/local/california/la-me-contraception-trump-20161115-story.html.

Impact of the federal contraceptive coverage guarantee on out-of-pocket payments for contraceptives: 2014 update

What Women Already Know: Documenting the Social and Economic Benefits of Family Planning

What Is at Stake with the Federal Contraceptive Coverage Guarantee?

The Coming Assault on Contraceptive Care