President Trump, his administration and many conservatives in Congress remain intent on repealing the Affordable Care Act (ACA), despite widespread pushback and concerns over the potential loss and diminishing quality of coverage, increased cost to individuals, and ultimately, the harm to people’s health and well-being. Their effort encompasses not only rolling back states’ Medicaid expansions and fundamentally altering Medicaid itself (see "Why Protecting Medicaid Means Protecting Sexual and Reproductive Health," 2017), but also changing the way that individuals can buy private coverage and, essentially, dismantling the ACA’s health insurance marketplaces.

Conservatives are seeking to overhaul or eliminate the ACA’s subsidies for marketplace coverage, eschew requirements that private plans cover a standard set of basic health care services and weaken requirements of plans to ensure accessible provider networks that marketplace enrollees can rely on. If they succeed in upending the affordability and usability of private coverage in these ways, there will be serious consequences for individuals’ access to basic health care, which includes sexual and reproductive health care.

Subsidized private plans have helped more people get coverage. Online marketplaces have given people the chance to better understand how health insurance works and explore plan options available to them. In addition, the ACA’s marketplaces have helped millions afford health coverage. In particular, considerably fewer U.S. women of reproductive age lacked coverage following the first two years of ACA implementation.1  Nationwide, between 2013 and 2015, the proportion of women aged 15–44 who were uninsured fell by 36% (see chart 1). This decline was driven by substantial gains in both Medicaid and private insurance coverage. 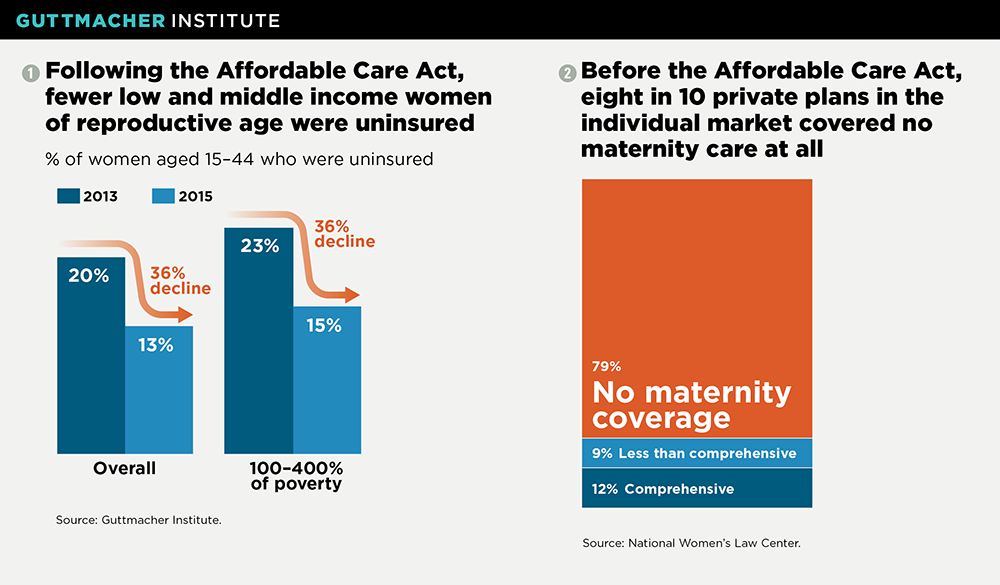 The ACA allows states to expand Medicaid eligibility to individuals with incomes up to 138% of the federal poverty level; thus far, 31 states and the District of Columbia have taken up that option.2 (The federal poverty level is $20,420 for a family of three.3) For individuals with incomes too high to qualify for Medicaid, the ACA provides financial help to purchase private coverage through an online health insurance marketplace: People with incomes between 100% and 400% of the federal poverty level can get refundable tax credits to lower the cost of their monthly premiums, and those with the lowest incomes (100−250% of poverty) can get additional subsidies to reduce their out-of-pocket costs when obtaining health services. About six in 10 people who are enrolled in marketplace coverage receive cost-sharing subsidies, and eight in 10 receive premium tax credits.4 And under the ACA, the amount of these tax credits is tied to the cost of coverage and to enrollees’ incomes, so lower income individuals in states with higher cost plans benefit most.

Furthermore, the ACA makes subsidized marketplace coverage particularly accessible for people facing barriers other than cost. This includes individuals experiencing domestic violence, who may be insured as a dependent on an abusive partner’s plan and need to obtain independent coverage for confidentiality reasons. It also includes many lawfully present immigrants who are legally barred from obtaining other types of coverage, including Medicaid, but can qualify for marketplace plans and the financial assistance that makes that coverage affordable. According to government estimates, 12.2 million people enrolled in marketplace coverage as of March 2017.4

Marketplace plans must cover core sexual and reproductive health services. In addition to making private coverage more attainable, the ACA has made private coverage more comprehensive. Notably, all marketplace plans (like other plans sold to individuals and small employers outside the marketplaces) must cover a set of 10 "essential health benefits." Among these benefits is maternity and newborn care, which in practice means a whole suite of services, including prenatal care visits, screenings and services that promote maternal and infant health, and labor and delivery.

Marketplace plans (like most other private health plans) must also cover dozens of preventive care services without patient cost-sharing, including a slate of services central to women’s sexual and reproductive health. In addition to at least one well-woman preventive care visit each year, these services include 18 methods of contraception and related services, Pap tests, testing and vaccinations for human papillomavirus, counseling and screenings to prevent HIV and other STIs, screening for intimate partner violence, counseling and education on breastfeeding, and breast pumps (see "Beyond Contraception: The Overlooked Reproductive Health Benefits of Health Reform’s Preventive Services Requirement," Fall 2012).

Still, there is room for improvement. Although abortion is an integral part of reproductive health that should be covered consistently by insurance, Congress decided against guaranteeing its coverage under the ACA. Instead, Congress included provisions to ensure individuals can choose a plan that excludes abortion, with no corresponding assurance of the availability of abortion coverage for those who want it. In fact, Congress explicitly allowed states to ban abortion coverage in marketplace plans, and 25 states have done so.5 However, as imperfect as marketplace coverage of abortion is now, it would likely disappear entirely under whatever coverage alternative Congress puts forward.6

Marketplace protections help ensure an accessible network of reproductive health providers. To translate coverage into affordable care, enrollees must be able to access a nearby provider who accepts their insurance. To that end, marketplace plans must adhere to certain "network adequacy" standards—that is, measures to ensure plans maintain provider networks capable of delivering timely, quality care to all enrollees.

Broad federal standards established under the ACA apply to all marketplace plans; however, as is the case with health insurance regulations generally, state policymakers have a great deal of flexibility to establish and enforce more specific requirements of plans’ provider networks. Frequently, state standards require marketplace plans to include a sufficient number and geographic distribution of private practitioners, such as obstetrician-gynecologists and nurse-midwives, who provide reproductive health services.

The ACA further requires all marketplace plans to contract with so-called essential community providers. These are providers that primarily serve low income, medically underserved individuals who are likely to experience difficulty accessing care—in large part, the very demographic targeted by the ACA’s coverage expansions.7 In states that opted for the federal government to administer their ACA marketplaces, plans are held to standards for contracting with essential community providers set by the Department of Health and Human Services: Currently, a plan offered through these marketplaces must contract with at least 30% of the available essential community providers in its service area and offer contracts to at least one safety-net family planning provider in each of the counties that make up the plan’s service area (where available).8 Many states that chose to administer their own ACA marketplaces have adopted these same federally defined standards, and some have even stronger contracting requirements (see "Marketplace Plans’ Provider Networks Are Just Not Adequate Without Family Planning Centers," Spring 2015).

The ACA’s coverage advances are being felt within the family planning safety net. A recent analysis of data from 28 safety-net family planning providers across the country found that the overall proportion of uninsured client visits decreased from 44% in the last three quarters of 2013 to 33% during the same period in 2015.9 This drop was the result of increases in both visits paid for by Medicaid and those paid for by private insurance.

Dismantling marketplace coverage would harm sexual and reproductive health. Continuing a years-long crusade, conservative policymakers in Congress have been working to dismantle the ACA, including some of its key provisions that advance the accessibility and quality of coverage available on the health insurance marketplaces and in private insurance more broadly.

For instance, conservatives are seeking to drastically scale back federal subsidies that help make private coverage affordable. A bill to undermine the ACA that was introduced in March and backed by the House Republican leadership and President Trump would have done away with cost-sharing subsidies and overhauled the premium tax credits, largely basing the amount of help people could receive on their age, rather than on their income and the cost of coverage. This would have resulted in considerable declines in tax credits for lower income individuals and those living in states and counties with high-cost plans.10,11 Analyses—including from the Congressional Budget Office—suggested that together these changes would have resulted in millions fewer individuals having coverage in the individual market, and in health plans that would have been less comprehensive and would have had higher copays and deductibles.12,13

In a concession to the most conservative members of the House, the final iteration of the bill in late March—before it was withdrawn when House leadership realized it did not have the votes to pass—sought to eliminate the requirement that marketplace and other private plans must cover the 10 essential health benefits, including maternity care. Doing so would have broad consequences for sexual and reproductive health. For instance, prior to the ACA, only a handful of states required coverage of maternity care, and plans frequently offered no or limited maternity coverage (see chart 2) or refused to cover women who were already pregnant—classifying pregnancy as a "preexisting condition."14 Repealing these minimum coverage requirements would result in more plans with paltry coverage, jeopardize the health of women and infants, and cost women more for truly comprehensive coverage they can actually use.15

In addition, the newly installed secretary of the Department of Health and Human Services, Tom Price, has long vociferously opposed the ACA and its contraceptive coverage guarantee specifically. His agency can undermine or eliminate that guarantee, with or without congressional action. Although private plans widely covered contraception prior to the ACA, many failed to cover all methods, and most required copayments that put certain methods—and potentially any method—out of reach for many women (see "What Is at Stake with the Federal Contraceptive Coverage Guarantee?," 2017).

Moreover, the Trump administration is already moving to weaken provider network requirements, by proposing that the proportion of essential community providers with which plans on the federal marketplace are required to contract be reduced from its current minimum of 30% to 20%.16 That is the opposite direction such standards should be going to ensure that lower income enrollees in particular are able to access the family planning and related care they need.

At the beginning of his term, President Trump issued a decree that his administration do as little as possible to support the systems and standards required to facilitate the ACA and its marketplaces. With the failure of the House leadership’s bill in March, Trump asserted that the ACA’s marketplaces would "explode" on their own—a signal to many observers that his administration might actively sabotage the law from within. Taken together, all of these actions make it clear that the Trump administration and Congress are poised to take affordable, comprehensive private health coverage—including coverage of much-needed sexual and reproductive health services—away from millions. If they succeed, it would be much to the detriment of the health and well-being of individuals, families and the nation’s public health.

3. Office of the Assistant Secretary for Planning and Evaluation, U.S. Department of Health and Human Services, Poverty guidelines, 2017, https://aspe.hhs.gov/poverty-guidelines.

What Is at Stake with the Federal Contraceptive Coverage Guarantee?

No One Benefits If Women Lose Coverage for Maternity Care