January 2017
Policy Analysis
The time is now. Will you stand up for reproductive health and rights?
Donate Now

In 2016, 18 states enacted 50 new abortion restrictions, bringing the number of new abortion restrictions enacted since 2010 to 338. Although state-level assaults on abortion access continued, 16 states took important steps in 2016 to expand access to other sexual and reproductive health services, adopting a total of 28 proactive measures. Many of these measures expand access to contraception by requiring health plans to cover an extended supply of contraceptive methods (five states), authorizing pharmacists to dispense contraceptives without a physician’s prescription (one state) or expanding insurance coverage of contraception (three states).

Aside from legislation, the most notable event of 2016 related to reproductive health access was the U.S. Supreme Court’s decision in Whole Woman’s Health v. Hellerstedt in June. That decision struck down abortion restrictions in Texas that had required abortion facilities to be the equivalent of ambulatory surgical centers and mandated abortion providers have admitting privileges at a local hospital; these measures had greatly diminished access to services in the state. Notably, the Court’s ruling underscored the need to consider scientific evidence, and not just lawmakers’ beliefs, in evaluating the constitutionality of abortion restrictions.

Unfortunately, just months after that landmark ruling, the election of Donald J. Trump raised the specter that the Supreme Court—if dramatically reshaped by the new administration—could place abortion rights for women across the country very much in jeopardy. Moreover, the resurgent Republican party—having maintained antiabortion majorities in both chambers of Congress—is undoubtedly planning an aggressive assault on sexual and reproductive health and rights. The Republican platform adopted in 2016 takes its cue from the states, naming many of the abortion restrictions that have received the most attention from state legislators in 2016, including banning abortions at 20 weeks postfertilization, outlawing dilation and evacuation abortion, restricting fetal tissue donation and research, and banning abortion for purposes of sex selection and genetic anomaly.

The 338 state abortion restrictions adopted since 2010—the year antiabortion forces took control of many state legislatures and governors’ mansions—account for 30% of the 1,142 abortion restrictions enacted by states since the 1973 Supreme Court decision in Roe v. Wade. These restrictions greatly shape the landscape facing women seeking to access abortion care. 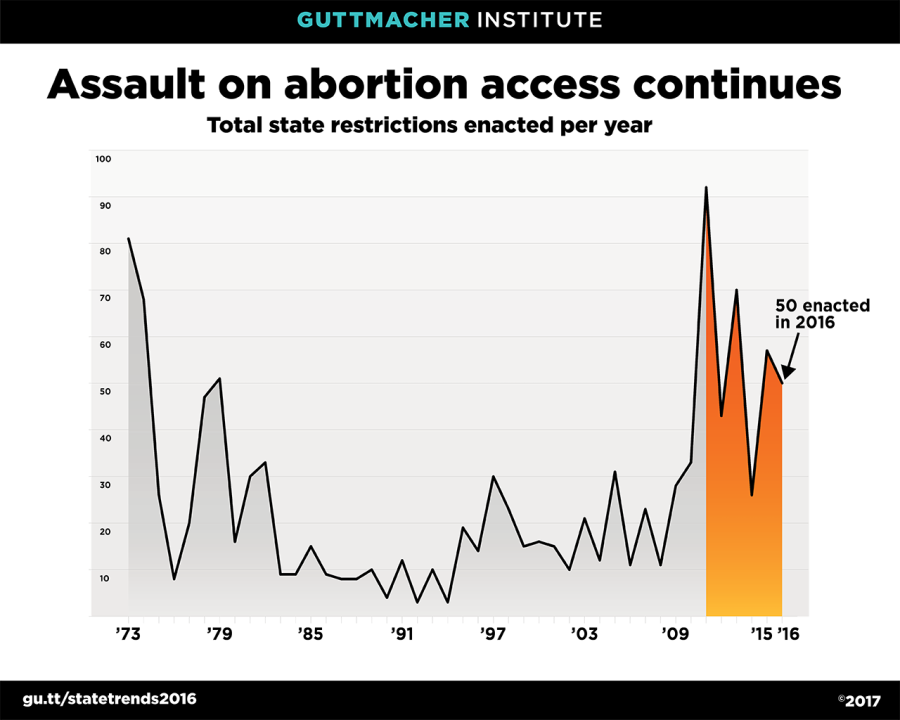 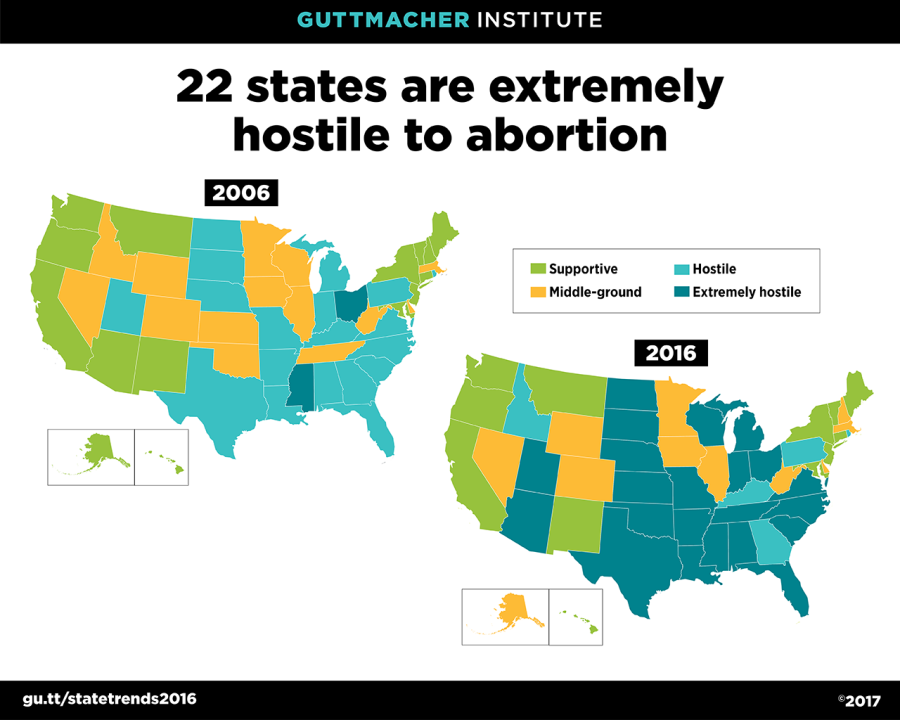 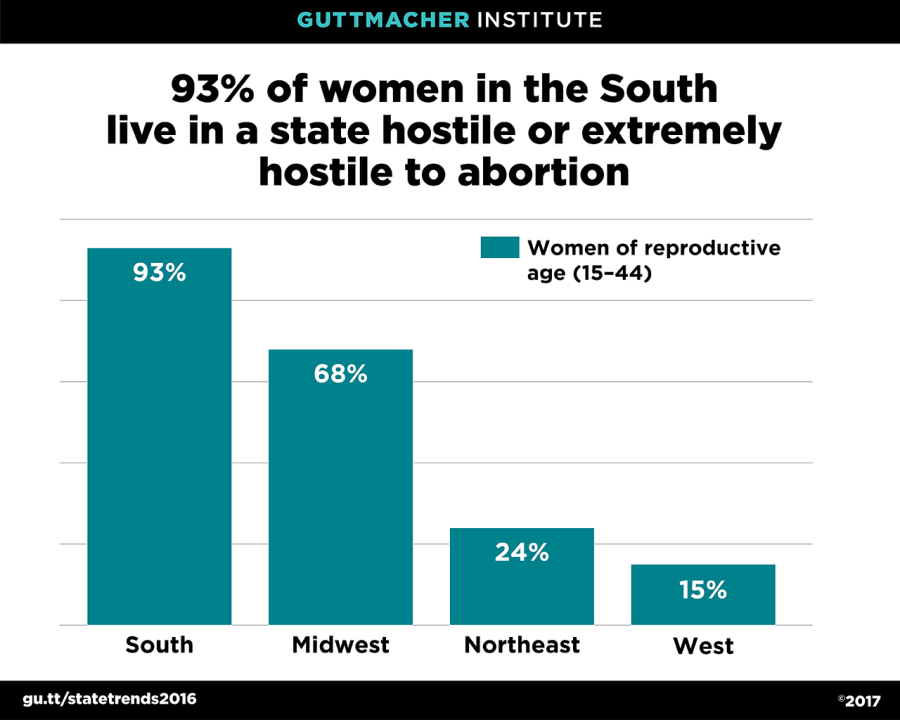 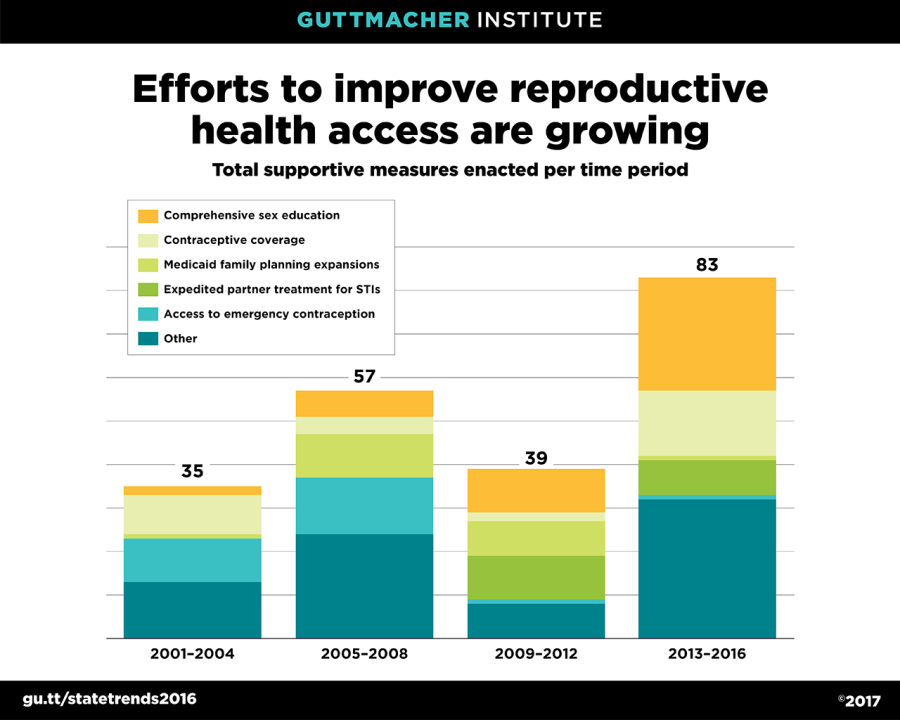 Efforts to make proactive progress picked up dramatically in 2013, after a considerable lull in 2010–2012. Significantly, the 28 proactive measures enacted in 2016 represent the highest number of proactive measures on reproductive health issues enacted in state legislatures in the past 16 years. Expanding access to contraception was a particular focus of legislators in 2016, with three types of measures commanding major attention:

*The 10 major abortion restrictions are: requiring parental involvement before a minor’s abortion; mandating medically inaccurate or misleading preabortion counseling; requiring a waiting period after abortion counseling at a clinic, thus necessitating two trips to the facility; mandating a non–medically indicated ultrasound before an abortion; banning Medicaid funding of abortion except in cases of life endangerment, rape or incest; restricting abortion coverage in private health plans; imposing medically inappropriate restrictions on medication abortion; requiring onerous and unnecessary regulations on abortion facilities; imposing an unconstitutional ban on abortion before viability or limits on abortion after viability; and enacting a preemptive ban on abortion if Roe v. Wade is overturned.
Printer-friendly version

22 States are Extremely Hostile to Abortion

Many Abortion Restrictions Have No Rigorous Scientific Basis