July 2017
Policy Analysis
The time is now. Will you stand up for reproductive health and rights?
Donate Now

Since the 2010 elections swept abortion opponents into power in state capitals across the country, state-level policymaking related to reproductive health and rights has focused almost exclusively on restricting access to abortion. Over 30% of all abortion restrictions enacted since the 1973 Supreme Court decision in Roe v. Wade came in just the last six years. Despite that onslaught, supporters of sexual and reproductive health and rights have been doggedly laying the groundwork for positive progress wherever possible. These efforts gained momentum over the first half of 2017 and led to some key victories that bolster access to contraception as well as protect abortion rights.

With the threat to the federal contraceptive coverage guarantee looming large since the November 2016 elections, policymakers in 25 states proposed measures to preserve—and in many cases even expand—access to contraception through insurance plans (see States Must Act to Shore Up the Federal Contraceptive Coverage Guarantee). So far this year, Maine and Nevada strengthened their existing contraceptive coverage guarantees; they both adopted measures prohibiting cost sharing for contraception, including sterilization for women, and requiring insurance coverage for an extended supply of contraceptive methods at one time. Nevada’s new law also requires insurance plans to cover over-the-counter methods, while Maine’s new law requires coverage for male sterilization. A regulation adopted by New York in June requires health insurance plans to cover all contraceptive methods as well as a 12-month supply after an initial three-month supply has been obtained. Colorado, Virginia and Washington also adopted legislative measures ensuring coverage of a full year’s contraceptive supply at one time. 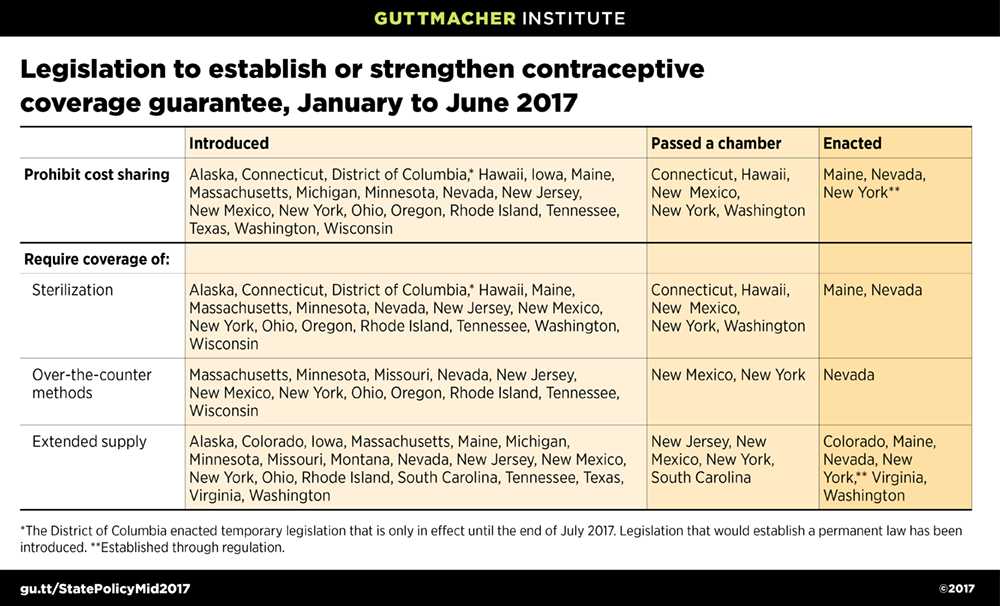 Colorado, New Mexico and Maryland moved this year to allow pharmacists to dispense contraceptives without a prescription. When these measures go into effect, seven states will allow direct pharmacy access.

Anticipating cuts to federal family planning funding, Maryland and Nevada adopted measures to maintain access for their residents. A new Maryland law requires the state to make up for any lost federal funds. Nevada, which generally does not have a specific line item in its budget for family planning, allocated $500,000 for each of the next two years because of the threat to federal funding streams.

Many states adopted legislation this year in response to mounting concern over high levels of opioid use. Six states (Florida, Georgia, Indiana, North Dakota, Ohio and Virginia) adopted measures to ensure that pregnant women have access to high-quality medical treatment. Georgia and Ohio adopted measures giving pregnant women priority access to treatment programs for opioid use, while Florida allocated additional funding for treatment for pregnant women. North Dakota and Virginia required health care providers to establish safe care plans for women and their children, which could include home visitation, intervention services and recovery support. North Dakota also adopted a measure allowing the state to provide referrals for support services to individuals caring for newborns who were exposed to addictive substances during pregnancy. Indiana repealed a provision that had considered substance use during pregnancy a rebuttable presumption of child neglect. In addition, a federal court struck down a Wisconsin law that allowed detention, forced treatment and incarceration of pregnant women engaging in substance use.

Three states also moved to protect access to abortion. Delaware enacted a comprehensive new law that affirms the legality of abortion until fetal viability, allows abortion after viability when the woman’s life or health would be at risk or when there is a diagnosed fetal anomaly, and repeals several outdated and unenforced abortion restrictions. Idaho officially repealed its ban on providing abortion via telemedicine; the law was struck down by a federal court in 2016. Finally, New York adopted regulations requiring private insurance plans to cover abortion services.

Even as some states move to make positive progress, the assault on sexual and reproductive health and rights continues apace. And, of course, efforts to restrict access to abortion services top the list. 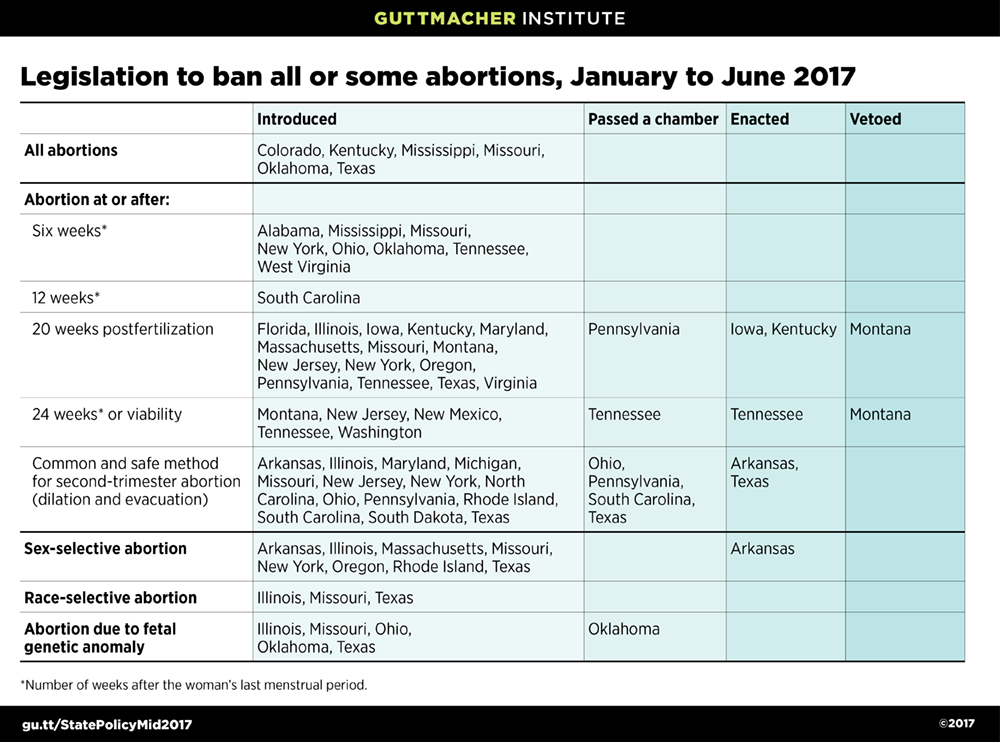 Tennessee enacted a measure to ban abortions after a fetus reaches viability, except when the woman’s life or physical health would be endangered. Including Tennessee, Missouri is the only other state with a law in effect limiting the health exception for postviability abortions to only the woman’s physical health (see State Policies on Later Abortions).

In addition, Montana Gov. Steve Bullock (D) vetoed two abortion bans. One of these would have prohibited abortion at or after 20 weeks postfertilization and the other would have allowed abortion after viability only in very limited circumstances.

Arkansas and Texas enacted new laws banning the use of a safe method of abortion, referred to as dilation and evacuation, which is often used in second-trimester procedures. Even though these new laws are not slated to go into effect for a few months, the American Civil Liberties Union (ACLU) has already filed a legal challenge to the Arkansas measure. Similar measures passed one legislative body in Pennsylvania and South Carolina. Mississippi and West Virginia are the only states to have this type of measure in effect; laws in a handful of other states are currently blocked pending litigation (see Bans on Specific Abortion Methods Used After the First Trimester).

Legislators in eight states introduced measures to ban abortion for purposes of sex selection. A measure adopted in Arkansas, which was slated to go into effect in mid-August, was quickly challenged by the ACLU. Seven other states have laws in effect banning abortions for purposes of sex selection (see Abortion Bans in Cases of Sex or Race Selection or Genetic Anomaly).

Attacking publicly funded family planning. Since the release of a series of deceptively edited videos in 2015 seeking to discredit Planned Parenthood, abortion opponents have mounted a sustained campaign to deny public family planning funding to providers who also offer abortion services (Recent Funding Restrictions on the U.S. Family Planning Safety Net May Foreshadow What Is to Come). Three new states added restrictions during the first half of this year:

Including Arizona, Kentucky and South Carolina, eight states have moved since 2015 to restrict public funds for family planning outside the Medicaid program. 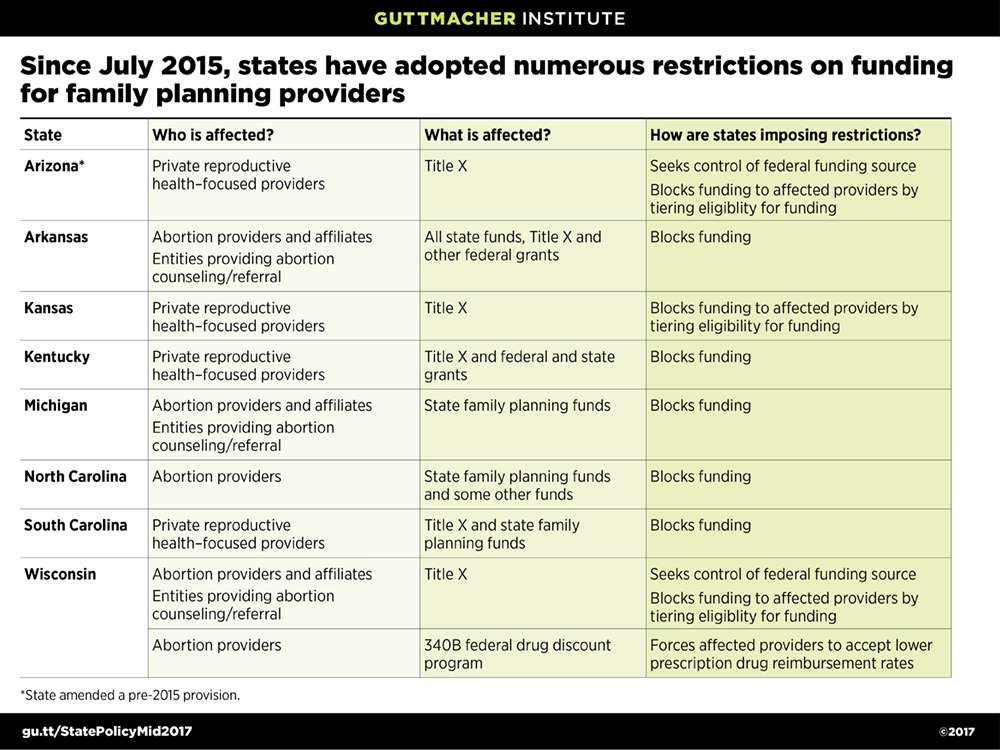 In addition, Iowa and Missouri enacted policies excluding abortion providers from their state Medicaid family planning expansions. In doing so, both states opted to terminate their joint federal-state programs, instead moving to implement entirely state-funded programs in which family planning providers that also offer abortions are not eligible to participate. Texas, which in 2013 became the first state to make such a move, is now beginning the process of seeking to restore federal funding for its family planning program. Under the Obama administration, the Centers for Medicare and Medicaid Services, the federal agency that administers Medicaid, made clear that state programs excluding otherwise qualified providers solely because of the package of care they provided were ineligible for federal Medicaid funding, blocking states that attempted to do so. Texas is now testing whether the Trump administration will uphold this long-standing Medicaid principle.

Flouting the Facts: State Abortion Restrictions Flying in the Face of Science

Recent Funding Restrictions on the U.S. Family Planning Safety Net May Foreshadow What Is to Come

D&E Abortion Bans: The Implications of Banning the Most Common Second-Trimester Procedure