Skip to main content
December 2013
Policy Analysis
The time is now. Will you stand up for reproductive health and rights?
Donate Now

Reproductive health and rights were once again the subject of extensive debate in state capitols in 2013. Over the course of the year, 39 states enacted 141 provisions related to reproductive health and rights. Half of these new provisions, 70 in 22 states, sought to restrict access to abortion services. In sharp contrast to this barrage of abortion restrictions, a handful of states adopted measures designed to expand access to reproductive health services. Most notably, California enacted the first new state law in more than seven years designed to expand access to abortion, and five states adopted measures to expand access to comprehensive sex education, facilitate access to emergency contraception for women who have been sexually assaulted and enable patients’ partners to obtain STI treatment. 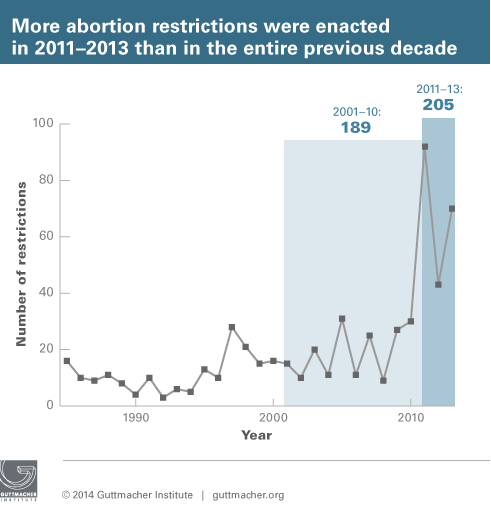 Forty-five percent of the abortion restrictions enacted over the last three years fall into four categories: targeted restrictions on abortion providers (TRAP), limitations on insurance coverage of abortion, bans on abortions at 20 weeks postfertilization (the equivalent of 22 weeks after a woman’s last menstrual period) and limitations on medication abortion. States enacted 93 measures in these four categories from 2011 through 2013, compared with 22 during the previous decade.

This legislative onslaught has dramatically changed the landscape for women needing abortion. In 2000, the two states that were the most restrictive in the nation, Mississippi and Utah, had five of 10 major types of abortion restrictions in effect (see Appendix). By 2013, however, 22 states had five or more restrictions, and Louisiana had 10.

In 2000, 13 states had at least four types of major abortion restrictions and so were considered hostile to abortion rights (see Troubling Trend: More States Hostile to Abortion Rights as Middle Ground Shrinks); 27 states fell into this category by 2013. In contrast, the number of states supportive of abortion rights fell from 17 to 13, while the number of middle-ground states was cut in half, from 20 to 10. The proportion of women living in restrictive states went from 31% to 56%, while the proportion living in supportive states fell from 40% to 31% over the same period. 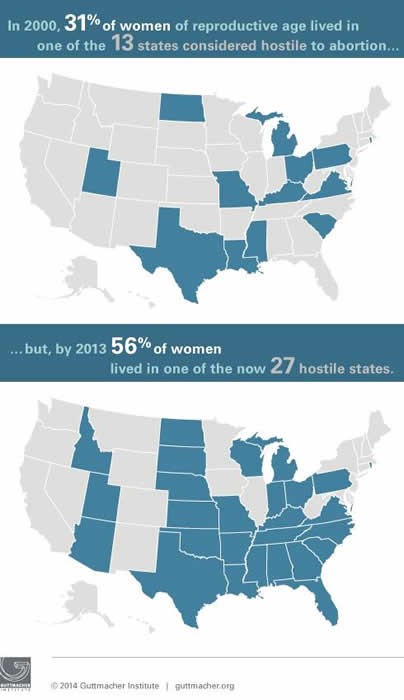 Against this backdrop, it is particularly noteworthy that California moved to significantly improve access to early abortion services by expanding the types of providers permitted to perform either medication or surgical abortions. Legislation enacted in September allows physician assistants, certified nurse midwives and nurse practitioners to provide abortions during the first trimester. Thirty-nine states limit the provision of abortion services to licensed physicians (see Overview of Abortion Laws). Also this year, Colorado repealed its pre-Roe abortion law. Although these measures are not enforced, 12 states continue to have pre-Roe laws on the books (see Abortion Policy in the Absence of Roe).

Despite this progress, the overwhelming preponderance of legislation concerning abortion was aimed at restricting access to the procedure. Four types of restrictions dominated the legislative scene during 2013: abortion bans, restrictions on abortion providers, limitations on the provision of medication abortion and restrictions on coverage of abortion in private health plans. Together, legislation in these four categories accounted for 56% of all restrictions enacted over the year.

Overtly flouting the standard established by Roe v. Wade, two states enacted laws banning abortion early in pregnancy. In March, the Arkansas legislature overrode a veto by Gov. Mike Beebe (D) to ban abortions occurring more than 12 weeks after a woman’s last menstrual period. Later that month, North Dakota enacted a ban on abortions occurring after a fetal heartbeat is detected, something that generally occurs at about six weeks after a woman’s last menstrual period. Legal challenges were quickly filed to both measures and enforcement is blocked while litigation proceeds. Additionally, the North Dakota legislature also approved an initiative that will be placed on the November 2014 ballot to ban abortion entirely by defining a person as a “human being at any stage of development.” Currently, no state has a law in effect prohibiting abortions early in pregnancy (see Abortion Policy in the Absence of Roe).

Antiabortion legislators in 11 states introduced measures aimed at banning abortion later in pregnancy based on the spurious belief that a fetus can feel pain at that point of development, and three new laws were enacted in Arkansas, North Dakota and Texas. These laws ban nearly all abortions performed at or beyond 20 weeks postfertilization (the equivalent of 22 weeks after the woman’s last menstrual period). All three have gone into effect, bringing to nine the number of states with a 20-week ban in effect (see State Policies on Later Abortions ). (A similar 20-week ban was passed by the U.S. House of Representatives in June; although introduced in the Senate late in the year, the measure was not voted on.)

Eight states enacted onerous and irrelevant licensing requirements targeting abortion clinics and providers in 2013. These laws are designed to discourage medical professionals from providing abortion and make it impossible for clinics to remain open (see TRAP Laws Gain Political Traction While Abortion Clinics—and the Women They Serve—Pay the Price). Most often, these restrictions require abortion providers to have admitting privileges at a local hospital, mandate transfer agreements with hospitals or impose onerous structural requirements on clinics.

The second way states have moved to restrict access to medication abortion is by requiring use of an outdated protocol that mandates a high dose of the medicine (in contrast to a widely used evidence-based protocol that permits a lower dose), prohibits its use after 49 days of pregnancy and requires the woman to make an extra trip to the clinic. In 2013, Texas adopted a variation on this approach by permitting use of the lower dose but retaining the two other limitations. The state joins Ohio in requiring use of the outdated protocol.

Finally, Oklahoma adopted a law in 2010 designed to ban medication abortion entirely. In 2012, the state’s supreme court overturned the law and in November, the U.S. Supreme Court declined to take the case. As a result, the ban is not in effect.

States adopted three types of restrictions on insurance coverage of abortion. Michigan’s new measure is the most expansive of those enacted in 2013, it prohibits abortion coverage in private health plans except when the woman’s life is endangered. This brings to nine the number of states with restrictions that apply to all private health plans (see State Policies on Restricting Insurance Coverage of Abortion).

States adopted a wide range of other major abortion restrictions in 2013.

Twenty states enacted measures relating to access to family planning services in 2013, including measures that set funding levels, determine the types of providers eligible for funding and affect access to emergency contraception.

Of the 17 states that passed budgets with line items for family planning funding, only Maine cut funding drastically; following on the heels of a 25% cut in 2012, the state slashed funds by an additional 33% in 2013. In contrast, New Hampshire reversed the 57% cut to family planning funding that had been adopted in 2011, restoring funds to their previous level. A similar attempt to reverse funding cuts in New Jersey came up short when Gov. Chris Christie (R) vetoed family planning funding for the fifth time.

Federal courts blocked measures enacted in Arizona and Indiana that would have excluded family planning providers who have any association with abortion services from being able to participate in the massive Medicaid program, citing that Medicaid patients have the right to seek treatment from the Medicaid provider of their choice (see Besieged Family Planning Network Plays Pivotal Role).

These injunctions cleared the way for abortion providers in Arizona and Indiana to be reimbursed for the family planning services they provide to Medicaid enrollees. In sharp contrast, Texas abolished its longstanding and successful federal-state family planning expansion after being told by the federal Centers for Medicare and Medicaid services that it was impermissible for the state to exclude providers who had some association with abortion. The state replaced it with a much smaller and entirely state-funded program (see State Medicaid Family Planning Eligibility Expansions).

Hawaii enacted a new law requiring that a woman who has been sexually assaulted receive medically accurate and unbiased information on emergency contraception from the hospital treating her injuries. The law also requires the hospital to dispense the medication when requested by the woman. Hawaii is the 18th state to provide protections to women who have been sexually assaulted (see Emergency Contraception).

In 2013, Hawaii, Nebraska and Vermont expanded access to treatment for STIs. Hawaii and Nebraska enacted provisions allowing health care practitioners to prescribe or dispense prescriptions for gonorrhea or chlamydia to a patient’s partner without first seeing the partner. Vermont, which had had a law allowing partner treatment for some STIs, enacted a new law expanding the conditions for which partner treatment is permitted. Twenty-eight states now explicitly permit treatment of a patient’s partner (see Partner Treatment for STIs).

Two states enacted measures to expand access to sex education in 2013. A new law in Colorado effectively prohibits abstinence-only instruction by requiring sex education in the state to be scientifically proven to delay sexual debut, reduce adolescents’ number of sexual partners, reduce the frequency of sex, and increase their contraceptive use. Illinois enacted three separate laws related to sex education. Although school districts can still decide for themselves whether to provide sex education, the new law requires any sex education that is taught in the state to be medically accurate and age-appropriate and include instruction on contraception and abstinence. The package also requires health education, which is mandatory for all school districts, to contain medically accurate information on abstinence as well as age-appropriate instruction on teen dating violence and child sexual abuse prevention. These new laws bring to nine the number of states requiring that the sex education provided in the state be medically accurate and include information on contraception (see State Policies in Brief: Sex and HIV Education.)

At the other end of the spectrum, new laws in North Carolina and Kansas could limit access to comprehensive and medically accurate sex education. A new law enacted in Kansas prohibits an individual who is associated in any way with an abortion provider from providing sex education. Meanwhile, a new law in North Carolina requires that sex education in the state must inform students that having an abortion increases the risk of a subsequent preterm birth. In Montana, Gov. Bullock (D) vetoed a measure that would have required parental consent for students participating in sex education.

Three states enacted laws regarding assault on pregnant women or fetal homicide. Arkansas adopted a measure allowing a fetus to be considered a victim of homicide at any point in gestation; a similar measure was allowed to go into effect in Montana without the governor’s signature. Instead of considering a fetus an independent victim, Colorado amended its statute criminalizing assault on a pregnant woman to include penalties for causing a pregnant woman to miscarry.

Tennessee enacted a law requiring publicly funded substance abuse facilities to give preference to pregnant women, there are now 10 states that require facilities give pregnant women priority access (see Substance Abuse During Pregnancy). It also prohibits the state from filing for protective services for a newborn if a woman who is less than 20 weeks into her pregnancy seeks substance abuse treatment as part of prenatal care. (A similar bill in New Mexico was effectively vetoed when Gov. Susana Martinez (R) took no action on it.) Finally, the budget adopted in Indiana allocated $250,000 for “prenatal substance use and prevention.”