Age at First Sex has Changed Little, But Childbearing Is Happening Later

The typical age at which teens first have sex has remained relatively stable over the past several decades, increasing slightly to 17.8 for women and 18.1 for men in the most recent cohort for whom data are available. For women coming of age in the mid-2000s, the median age at first sex was about the same as that of women 35 years earlier, according to "Trends in Ages at Key Reproductive Transitions in the United States, 1951–2010," by Lawrence B. Finer and Jesse M. Philbin. However, the typical time between first sex and first birth has increased from three years for women born in 1940 to almost 10 years for women born in 1982. 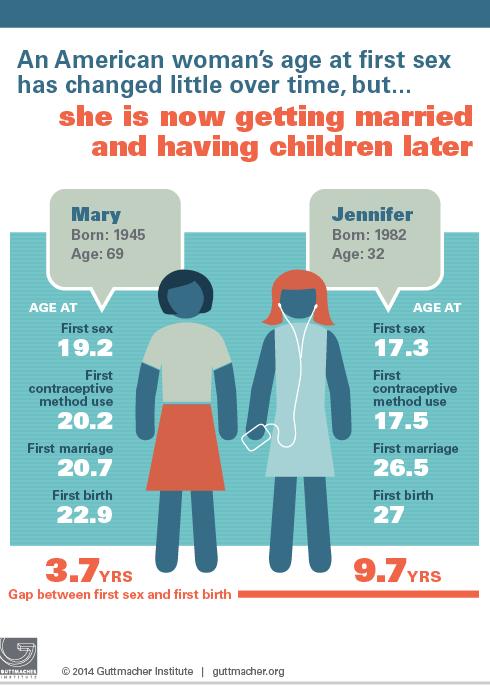 "This is the period of highest risk for unintended pregnancy," says Dr. Finer. "Later childbearing means many women are at risk for a decade or more before they have kids. The growing length of this period makes it vital that women have access to a wide range of effective methods of contraception—not just the condoms and pills that women commonly use now, but also highly effective long-acting methods like the IUD and the implant. The latter methods don’t require any regular action on the woman’s part, which might be particularly helpful for teens and young adults." 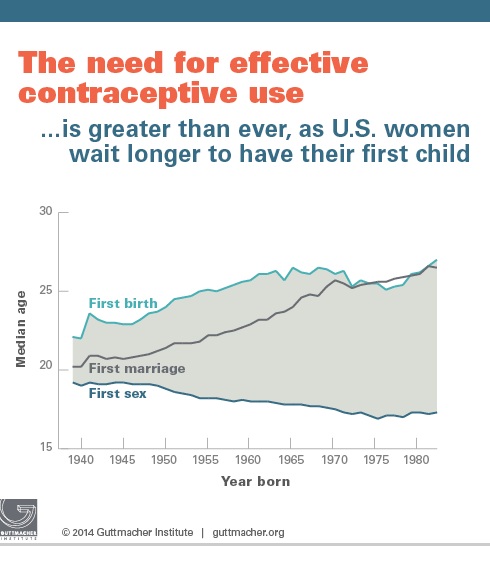 In a bit of good news, the study found that on average, the time gap between first sex and first contraceptive use has diminished as contraceptive use at first sex has increased. This bodes well for the prevention of unintended pregnancy among teens early in the high-risk period. Additionally, although disparities in contraceptive initiation persist, with Hispanic women lagging behind women of other racial and ethnic groups, those differences decreased over time.

The authors also report that, contrary to popular media reports, the age at first menstrual period has not changed over the last 40 years; the current median age at menarche is 12.3.

"Trends in Ages at Key Reproductive Transitions in the United States, 1951–2010," by Lawrence B. Finer and Jesse M. Philbin is currently available online and will be published in the May–June 2014 issue of Women’s Health Issues.

Trends in Ages at Key Reproductive Transitions in the United States, 1951–2010

The need for effective contraceptive use is greater than ever

Contraceptive use at first sex has become the norm among U.S. teens

U.S. Men Need a Range of Services and Counseling for Much of Their Lives