Clandestine Abortion Is Common in Kinshasa, and Procedures Are Often Unsafe

An estimated 146,700 abortions were performed in 2016 in Kinshasa, the capital of the Democratic Republic of Congo (DRC), according to a new study conducted by researchers at the University of Kinshasa and the Guttmacher Institute. This translates to an abortion rate of 56 per 1,000 women of reproductive age, suggesting that abortion is very common in Kinshasa.

The study provides the first estimates of the incidence of abortion in Kinshasa, where abortion is legally prohibited without exception. The city is the DRC’s largest urban area, and its population of 12 million accounts for 15% of the country’s total population. It is important to note that Kinshasa is not representative of the rest of the DRC—Africa’s second largest country—which remains largely rural. Currently, there exists no reliable estimate of the incidence of abortion for the DRC as a whole. 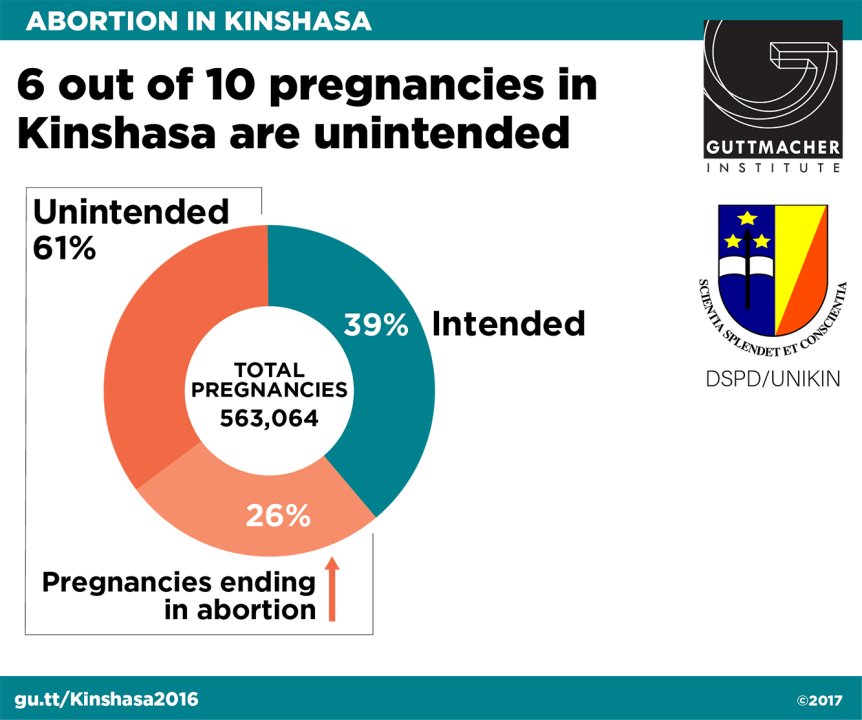 "Unintended pregnancy is the root cause of most abortions, and in Kinshasa, we found that almost half of all unintended pregnancies end in abortion," says Dr. Patrick Kayembe, a coauthor of the study and professor of Medicine and Public Health at the University of Kinshasa. "Enabling women to avoid pregnancies that they do not want to have is critical to improving their health and lives."

Although the penal code of the DRC prohibits abortion altogether, it is generally accepted that the procedure can be performed to save a woman’s life, and in rare instances, women are able to obtain safe abortion care for this reason. Beyond these exceptional circumstances, the abortion procedures women seek are clandestine and often unsafe. The study found that, about 37,900 abortions in 2016 (about a quarter of all abortions in Kinshasa) resulted in complications that were treated in a health facility. Experts in Kinshasa surveyed by the study team estimated that an additional 11,500 abortions resulted in complications that required—but did not receive—medical attention.

Though the study did not produce an estimate of how many unsafe abortions in Kinshasa resulted in death, it is likely that complications from unsafe abortion contribute substantially to the DRC’s high maternal mortality ratio. Notwithstanding improvements in recent years, the DRC continues to have one of the highest maternal mortality ratios in the world at 693 maternal deaths per 100,000 live births.

"This study comes at a critical time, filling a major evidence gap on the reproductive health care needs of women in Kinshasa," says Dr. Akinrinola Bankole, a coauthor of the study and senior fellow at the Guttmacher Institute. "After decades of armed conflict and mismanagement, the health care infrastructure in Kinshasa and across the Democratic Republic of Congo is being rebuilt, and the evidence this study provides can inform efforts to expand and improve the provision of essential reproductive health services, including family planning and postabortion care."

The authors recommend strengthening efforts to provide high-quality contraceptive services to women and couples in Kinshasa, a crucial step to reduce the number of unintended pregnancies and the unsafe abortions that often follow. They also recommend undertaking research to better understand nonuse of modern contraceptives among women who wish to avoid pregnancy. Expanding postabortion care services is also essential, so that all women who need medical treatment for complications of unsafe abortion can obtain it. Finally, because the need for abortion care will always exist, increasing access to safe abortion services is essential in order to reduce maternal injuries and deaths.

This study was made possible by grants from The David and Lucile Packard Foundation, the Swedish International Development Cooperation Agency, the Dutch Ministry of Foreign Affairs and the Norwegian Agency for Development Cooperation, and by UK Aid from the UK Government. The views expressed are those of the authors and do not necessarily reflect the positions or policies of the donors.

"The Incidence of Induced Abortion in Kinshasa, Democratic Republic of Congo, 2016," by Sophia Chae et al., is available online in PLOS ONE.

The incidence of induced abortion in Kinshasa, Democratic Republic of Congo, 2016