State-Level Estimates of Contraceptive Use in the United States, 2017

Ayana Douglas-Hall
,
Kathryn Kost
and
Megan L. Kavanaugh
The time is now. Will you stand up for reproductive health and rights?
Donate Now

This report presents new state-level estimates of contraceptive prevalence among women of reproductive age in the United States. While surveillance efforts such as the National Survey of Family Growth (NSFG) and the National Health and Nutrition Examination Survey (NHANES) collect nationally representative data on reproductive health measures, the Behavioral Risk Factor Surveillance System (BRFSS) offers an opportunity to explore basic indicators of reproductive health among resident women in each state. In particular, BRFSS data show state-by-state differences in contraceptive use. The estimates for 2017 presented here provide the most comprehensive documentation of contraceptive use at the state level since 2004.

The BRFSS is a surveillance system that conducts monthly cross-sectional surveys in all 50 states, the District of Columbia and three U.S. territories (Guam, Puerto Rico and the U.S. Virgin Islands). Landline and cellphone interviews are used to collect retrospective self-reported data from adult men and women aged 18 and older. Data collection is conducted separately by each jurisdiction, using complex sampling designs determined by that jurisdiction and reviewed by the Centers for Disease Control and Prevention (CDC). The BRFSS questionnaire consists of three components: a core set of questions used by all jurisdictions that covers demographics, current health conditions and health-related behaviors; optional modules on specific health topics (e.g., sexual and reproductive health, cardiovascular disease, arthritis); and questions jurisdictions have developed for their own use. The questions from the core and optional modules are edited and evaluated by the CDC; questions added by individual jurisdictions are not.1 More detailed information on questionnaires, survey methodology, sample design, response rates, fieldwork procedures and variance estimation is published elsewhere.2,3 Data, representative of noninstitutionalized adult residents of each state with available data, are publicly available for download on the BRFSS website.4

The tables in this report present basic tabulations of contraceptive method use data from the 2017 BRFSS. In 2017, key questions regarding women’s reproductive health were asked in the optional Preconception Health/Family Planning module. Forty-three jurisdictions included this optional module among their survey questions.* Our analytic sample is limited to female respondents aged 18–49 (n=61,306) who were living in 40 of these 43 jurisdictions. Illinois and Kentucky were excluded because they did not collect data for the entirety of 2017; the U.S. Virgin Islands were excluded because of a low number of observations. In addition, estimates for the District of Columbia and Puerto Rico are included in the report’s tables, but excluded from highlighted state comparisons.

All analyses were performed using Stata version 15.1. We applied sampling weights that yield estimates representative of resident women aged 18–49 within each state or territory to account for the BRFSS’s multistage, probability-based complex sample design. In addition, we used design variables for the sampling stratum and cluster to obtain correct standard errors for all estimates.

Weighted estimates were calculated to determine the proportion of women who reported using contraceptives at last sex among all women and among women at risk of unintended pregnancy. Women were categorized as at risk of unintended pregnancy at the time of the interview if they reported they were currently sexually active with one or more male partners, were not currently pregnant or trying to become pregnant, and had not had a hysterectomy.† The survey questions used for this analysis came from both the core survey and the optional module, and the specific questions and the answer choices provided to survey respondents are shown in the appendix. Of note, contraceptive method distributions presented here indicate the most effective methods used at last sex (referred to subsequently in this report as the “primary” method), as only the most effective method residents reported as having used at last sex was recorded in the BRFSS questionnaire.‡ Contraceptive methods were classified, according to first-year typical-use failure rates, into the following categories: permanent, long-acting reversible, moderately effective and least effective.§ 5,6 The contraceptive effectiveness classifications used in this report align with designations used by the CDC.7

Women at risk of unintended pregnancy who did not specify the type of contraceptive they used were included in estimates of overall contraceptive use but excluded from estimates where contraceptive use is grouped by the effectiveness of the method used. Estimates that did not meet reliability standards established for BRFSS by the CDC have been suppressed (i.e., a relative standard error greater than 30% or an unweighted denominator of fewer than 50 respondents).8 Estimates for certain methods did not meet the criteria for reliability in some jurisdictions and were therefore further grouped with other methods in their respective contraceptive effectiveness classifications: injectables, patches and rings were grouped together under “other non-LARC hormonal,” and emergency contraception, diaphragms, cervical rings, cervical caps, rhythm method, natural family planning and spermicidal methods were grouped together under “other.”

Contraceptive use by risk of unintended pregnancy 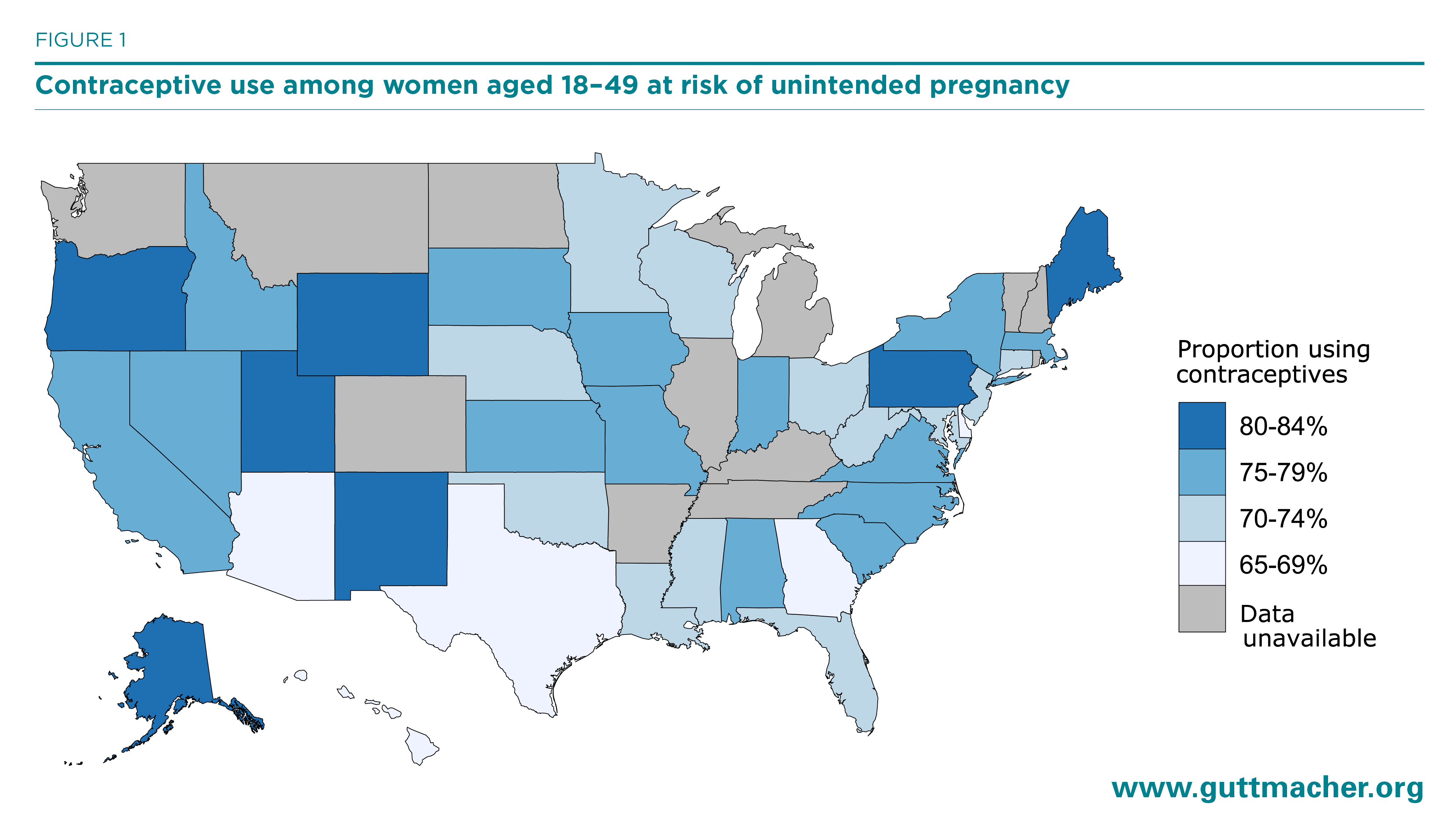 Contraceptive use among women at risk of unintended pregnancy

Individuals use contraceptives to prevent unwanted pregnancies. Nationally, among U.S. women at risk of unintended pregnancy, the proportion who use a contraceptive method increased from 78% in 1982 to 89% in 2008 and has stayed at approximately that level for the past decade.8–10 More than six million women received publicly funded contraceptive services in 2015; this national effort helped women avoid an estimated 1.86 million unintended pregnancies, including 876,100 unplanned births and 628,600 abortions.11

Estimates presented here highlight differences in the most effective contraceptive method used at last sex among resident women aged 18–49 across the United States—both among this age-group overall and among the subgroup at risk of unintended pregnancy. In every state, the majority of women of reproductive age are using some form of contraceptive, and the rate of use is higher among women at risk of unintended pregnancy than among all women of reproductive age. Use estimates for primary methods show wide variability across the states, especially for female sterilization, IUDs, oral contraceptives and condoms. Maine has the highest levels of contraceptive use among women at risk of unintended pregnancy, driven by comparatively high use of LARCs and moderately effective methods, and comparatively low use of the least effective methods.

The state-level BRFSS and national NSFG differ in some significant ways that prevent direct comparison of contraceptive use estimates. First, the NSFG asks about method use among respondents aged 15–44, while the BRFSS asks about method use among respondents aged 18–49. A supplemental analysis of these 2017 BRFSS data in which we narrowed the sample to those aged 18–44 yielded higher contraceptive use prevalence across jurisdictions (not shown), as compared with the contraceptive use prevalence presented in this report among the full sample aged 18–49. In addition, the primary question addressing current contraceptive use in the NSFG asks about use in the interview month, while the BRFSS item asks about use at last sex. Finally, respondents to the NSFG and the BRFSS are not asked about their experience of hysterectomy in the same manner: All NSFG respondents who are currently not pregnant are asked if they ever had a hysterectomy; in the BRFSS, only nonusers of contraceptives are asked about hysterectomy as a possible reason for nonuse (see Additional Notes on the Data for more information). Given these key differences between the national and state-level data, we advise against making direct comparisons between the two data sources.

Additional Notes on the Data

†Women who answered “don’t care if [I] get pregnant” when asked about their rationale for nonuse were considered in this report to be at risk of unintended pregnancy (see Additional Notes on the Data for more information).

‡Because the use of more than one method was not recorded in the BRFSS, use of less effective contraceptive methods was likely underestimated.

7. Pazol K et al., Contraceptive use among women at risk for unintended pregnancy in the context of public health emergencies—United States, 2016, Morbidity and Mortality Weekly Report, 2018, 67(32):898–902.

12. Frohwirth L et al., The complexity of multiple contraceptive method use and the anxiety that informs it: implications for theory and practice, Archives of Sexual Behavior, 2016, 45(8):2123–2135.

19. Yoo SH, Guzzo KB and Hayford SR, Understanding the complexity of ambivalence toward pregnancy: Does it predict inconsistent use of contraception?, Biodemography and Social Biology, 2014, 60(1):49–66.

This report was prepared by Ayana Douglas-Hall, Kathryn Kost and Megan L. Kavanaugh. Haley Ball and Peter Ephross edited the report. Research support was provided by Isaac Maddow-Zimet. Adam Sonfield and Rebecca Wind offered valuable comments and suggestions. All are of the Guttmacher Institute.