Future Scenarios of Adolescent Contraceptive Use, Costs and Impact in Developing Regions

Fact Sheet
August 2018
Reproductive rights are under attack. Will you help us fight back with facts?
Donate Now

Meeting adolescents’ needs for contraceptive services is a critical health and development goal and helps enable adolescents to control whether and when they become pregnant and have children. About half of pregnancies among adolescent women (defined as those aged 15–19) in developing regions are unintended, and more than half of these end in an induced, and often unsafe, abortion.

Scenario 2 uses the same level of projected growth in modern contraceptive use as scenario 1, but assumes 20% of users of short-acting methods would shift to using LARCs, compared with the method mix in 2017.

Scenario 4 uses the accelerated growth in modern contraceptive method use outlined in scenario 3, but assumes a 20% shift away from short-acting methods to LARCs, compared with the method mix in 2017. 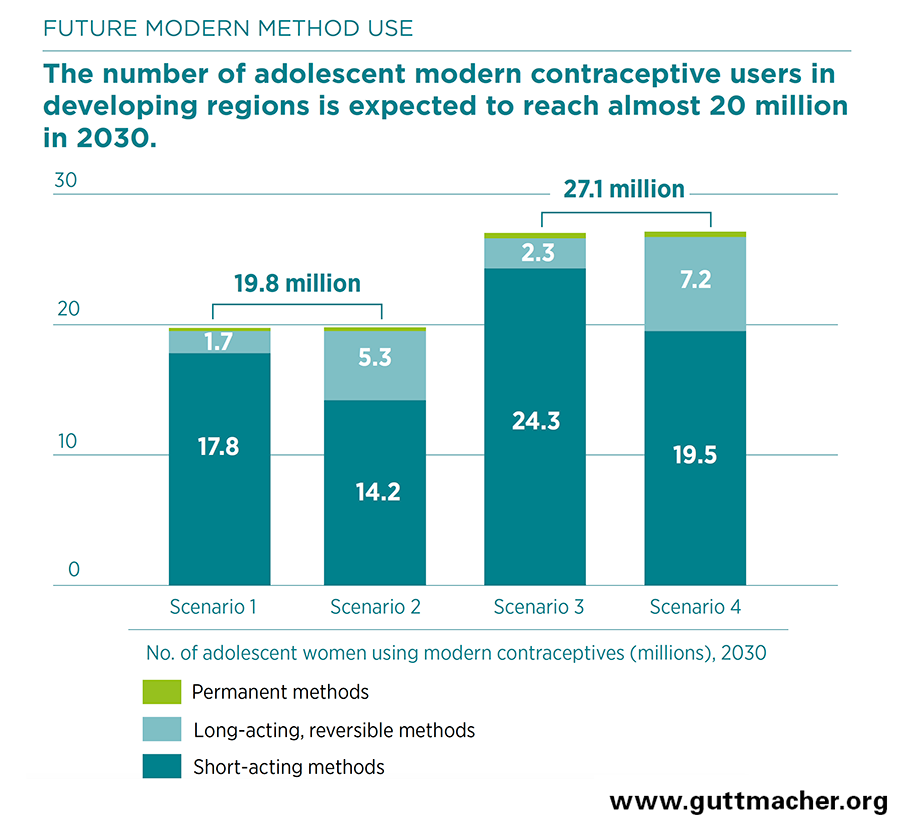 The information in this fact sheet can be found in Biddlecom A et al., Future Scenarios of Adolescent Contraceptive Use, Cost and Impact in Developing Regions, New York: Guttmacher Institute, 2018, https://www.guttmacher.org/report/adolescent-contraceptive-use-in-devel….

†All monetary estimates are in 2017 dollars unadjusted for inflation.

†All monetary estimates are in 2017 dollars unadjusted for inflation.

This fact sheet was made possible by UK Aid from the UK Government and support from The Children’s Investment Fund Foundation. Its findings and conclusions are those of the authors and do not necessarily reflect the positions or policies of the donors.

Future Scenarios of Adolescent Contraceptive Use, Cost and Impact in Developing Regions