Fact Sheet
January 2015
Reproductive rights are under attack. Will you help us fight back with facts?
Donate Now

• Women in Pakistan have a high level of unmet need for contraception— estimated at 20% in 2012–2013. This results in high rates of unintended pregnancy, unplanned births and induced abortion. Improving and expanding the provision of family planning services are critical to enable women and couples to have the number of children they want, when they want them.

• The decline in the number of births in Pakistan has been slower than in other Asian countries. The total fertility rate dropped from about six children per woman in the early 1980s to 4.4 in 2003. However, the rate decreased more slowly from 2006 to 2013 (from 4.1 to 3.8). On average, Pakistani women still have one child more than they desire.

• Contraceptive use—including both traditional and modern methods—among married women has risen slowly, from 30% in 2007 to 35% in 2013. Use of modern methods has increased from 22% to 26% over this period.

• Among women who use any method, the discontinuation rate within one year of use is high, at 37%.

• In Pakistan, abortion is legally allowed only to save the life of a woman or to provide "necessary treatment" early in pregnancy. Given a lack of clarity in interpreting the law, legal abortion services are difficult to obtain, and most women who have an abortion resort to clandestine and unsafe procedures. 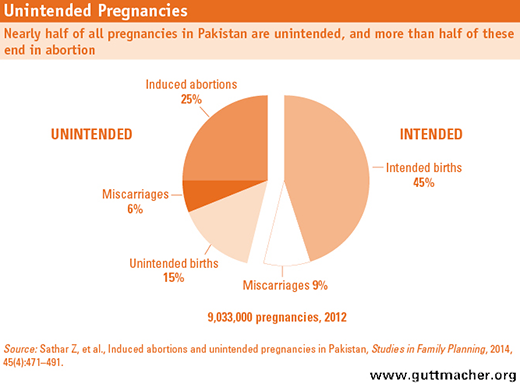 • The proportion of pregnancies that were unintended rose from 38% in 2002 to 46% in 2012, which indicates that increases in contraceptive use have not kept pace with the growing desire for smaller families.

• In 2012, there were approximately nine million pregnancies in Pakistan, of which 4.2 million were unintended. Of these unintended pregnancies, 54% resulted in induced abortions and 34% in unplanned births.

• The proportion of unintended pregnancies resulting in induced abortions varied significantly among provinces. Sindh and Baluchistan had the highest proportions (62% and 63%, respectively), while the lowest was found in Khyber Pakhtunkhwa (40%).

• There were an estimated 2.25 million induced abortions in Pakistan in 2012. The majority of these abortions were clandestine, and placed women’s health and lives at risk.

• In 2012, the national abortion rate was 50 abortions per 1,000 women aged 15–49. This rate is much higher than the rate estimated for 2002, 26.5 per 1,000. Even acknowledging an underestimation of the 2002 rate, which did not count private-sector procedures, a significant increase likely occurred over this 10-year period.

• The abortion rate varied substantially among provinces: The highest rates were in Baluchistan and Sindh (60 and 57 abortions per 1,000, respectively), and the lowest was in Khyber Pakhtunkhwa (35 per 1,000).

• In 2012, an estimated 623,000 Pakistani women were treated for complications resulting from induced abortions, the vast majority of which were performed by unqualified providers or involved traditional methods.

• About 63% of treated women obtained postabortion care in private facilities. The proportion treated in such facilities was highest in Punjab (70%), slightly below the national average in Sindh (58%) and Khyber Pakhtunkhwa (57%), and lowest in Baluchistan (22%).

• The consequences of unintended pregnancy and induced abortion result in substantial costs to the country’s health care system, as well as to women and their families. Policy- makers and service providers must make improved access to quality contraceptive services an urgent priority, especially in rural areas, so that Pakistani women are better able to time and space their pregnancies and have the number of children they desire.

• The provision of family planning counseling and methods should be made a routine part of postabortion care in both public- and private-sector facilities.

• Expanding public-sector services will require the training of additional health care providers, including doctors and midlevel providers in safer methods of treating postabortion complications. Essential supplies— such as manual vacuum aspiration kits and disinfectant equipment—must be made consistently available.

• The effective expansion of family planning services will also require recognition within the health sector that family planning is an essential part of improving maternal, neonatal and child health. The provision of all of these services must be better integrated.

The data in this fact sheet are drawn from Sathar Z et al., Induced abortion and unintended pregnancies in Pakistan, Studies in Family Planning, 2014, 45(4):471–491.

This fact sheet and the research upon which it is based were made possible by grants from the David and Lucile Packard Foundation and the UK Government. The findings and conclusions are those of the authors and do not necessarily reflect positions or policies of the donors.