Rates in the Developing World Have Remained Mostly Unchanged

Abortion rates declined significantly across most developed regions between 1990 and 2014. However, during the same period, they remained largely unchanged in developing regions. The findings come from a new study by the Guttmacher Institute and the World Health Organization (WHO). It found that between 1990 and 2014, the overall number of abortions per 1,000 women of childbearing age (15–44 years old) in developed countries dropped from 46 to 27, while in developing countries, it changed little, from 39 to 37, a nonsignificant difference. The study’s findings appear in an article, "Abortion incidence between 1990 and 2014: global, regional, and subregional levels and trends," by Gilda Sedgh et al., published today in The Lancet. 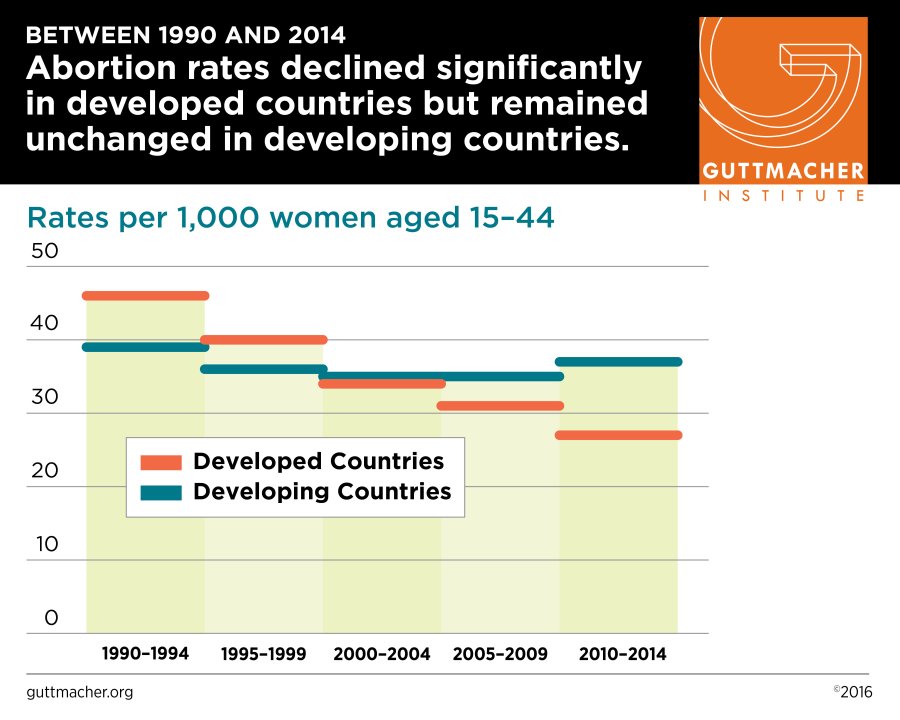 The researchers also found that although the global abortion rate declined slightly during the 25-year period studied, the absolute number of abortions per year increased as a result of population growth. Globally, the annual number of abortions grew by almost 6 million, from 50.4 million in 1990–1994 to 56.3 million in 2010–2014. The estimated abortion rate in 2010–2014 was 35 per 1,000 women. Broken down by marital status, it was 36 per 1,000 for married women and 25 per 1,000 for unmarried women. Some 73% of all abortions, or 41 million, were obtained by married women.

"These trends suggest that women and couples in the developed world have become more successful at avoiding unintended pregnancies—the cause of most abortions—over the last two decades," says Dr. Sedgh, lead author of the study and a principal research scientist at the Guttmacher Institute. "High abortion rates are directly correlated to high levels of unmet contraceptive need. Our findings indicate that in many developing regions, women lack the contraceptive services they need and are unable to prevent pregnancies they do not want to have." 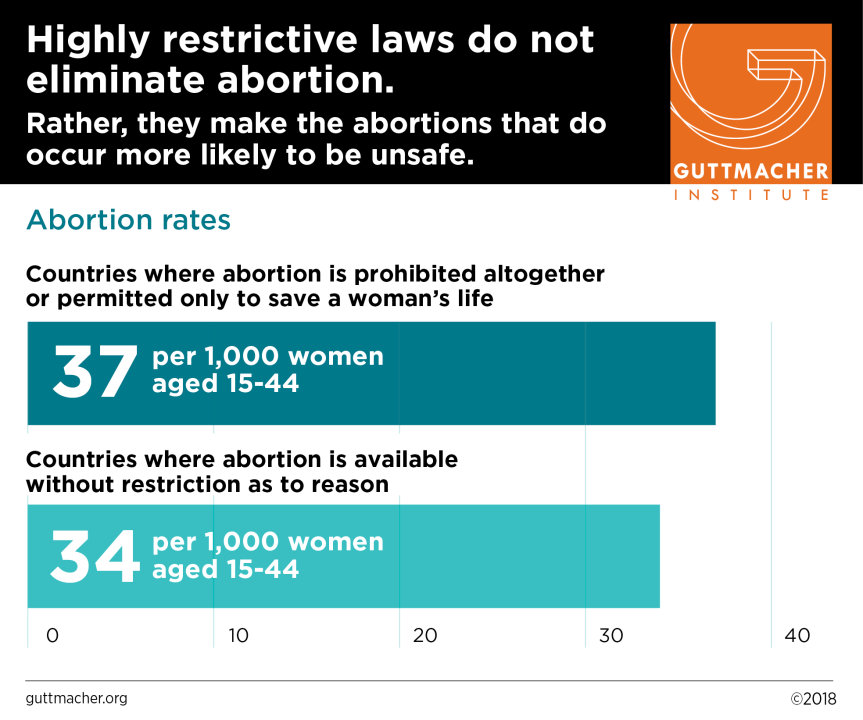 It has been estimated that in developing regions, where abortion laws tend to be highly restrictive, some 6.9 million women were treated for complications from unsafe abortions in 2012, at a rate of 6.9 women treated per 1,000 women aged 15–44.

"Estimates for the proportion of abortions that are unsafe are under development, but it is likely that where access to safe abortion is limited, women may turn to clandestine procedures that are often unsafe. Making greater investments in quality family planning services would help reduce the rates of unintended pregnancy and therefore overall abortion rates," says Bela Ganatra, a scientist with the World Health Organization’s Department of Reproductive Health and Research and a coauthor of the study. "Ensuring that women and couples have access to a wide range of methods to choose from and receive comprehensive information about how to use their chosen method consistently and correctly is sound public health policy."

While emphasizing the importance of efforts to ensure universal access to quality family planning services, the researchers also noted that their findings provide further evidence that even if all women and couples who wish to avoid pregnancy had universal access to contraception, unintended pregnancies and abortions would still occur. Women may become pregnant as a result of sexual violence, contraceptive methods may fail, and women who initially wish to have a child may experience a change of circumstances after they become pregnant. Therefore, access to safe abortion is essential so that women who need abortion care don’t have to resort to unsafe procedures.

The estimates of abortion incidence for 1990–2014 presented in this study supersede previously published estimates for 1995, 2003 and 2008. The updated methodology used for this analysis resulted in more accurate projections by bringing more evidence to bear on the estimates than did previous studies.

This study was made possible by grants from the UK Government, the Norwegian Agency for Development Cooperation and the Dutch Ministry of Foreign Affairs. The findings and conclusions contained within do not necessarily reflect the positions and policies of the donors.

Abortion incidence between 1990 and 2014: global, regional, and subregional levels and trends