New research estimates 141,000 abortions occurred in Malawi in 2015—at an annual rate of 38 abortions per 1,000 women of reproductive age—all of which indicates that abortion is common in the country. The majority of these procedures were performed under clandestine and unsafe conditions and often resulted in complications. The research, which was conducted by the U.S.-based Guttmacher Institute and the Centre for Reproductive Health at the University of Malawi College of Medicine, comes as a national debate is underway in Malawi on whether to liberalize the country’s abortion law by expanding the criteria under which an abortion can be legally obtained. Under the current law in Malawi, abortion is only permitted when it is necessary to save the life of the woman.

Malawi has one of the highest maternal mortality ratios in the world. There is a one in 29 chance that a 15-year-old girl in Malawi will eventually die from a pregnancy-related condition. Unsafe abortion is one of the major causes of maternal death in the country. According to recent estimates, complications from abortion are the cause of 6–18% of maternal deaths in Malawi.

"Restrictive abortion laws do not stop abortion from occurring, they just drive it underground, forcing women to resort to clandestine procedures, which are often unsafe," says study coauthor Dr. Chisale Mhango, senior lecturer at the University of Malawi College of Medicine and former director of the National Reproductive Health Service. "Addressing unsafe abortion is an urgent public health priority." 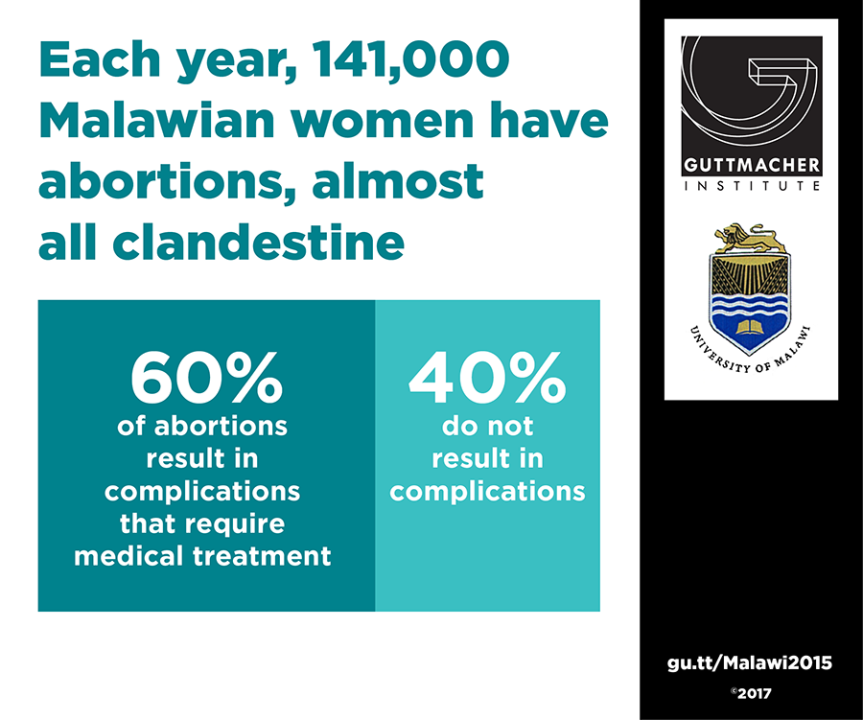 The new research finds that in 2015, an estimated 60% of women who had an abortion experienced complications that required medical treatment in a health facility. However, approximately one in three women experiencing such complications did not receive the postabortion care they needed.

"Helping Malawian women avoid unintended pregnancy is critical to reducing the incidence of abortion and the complications and deaths that often follow unsafe, clandestine procedures," says Dr. Chelsea Polis, senior research scientist at the Guttmacher Institute and lead author of the study. "Our study found that in 2015, more than half of all pregnancies in Malawi were unintended, and almost one-third of those unintended pregnancies ended in abortion."

The researchers recommend strengthening Malawi’s family planning programs to ensure that all Malawians can use their preferred contraceptive methods correctly and consistently. Doing so will help reduce the number of unintended pregnancies and therefore reduce the need for abortion. They also note the importance of continuing to expand postabortion care services so that every woman who experiences complications from an unsafe abortion can get the care she needs. Improving postabortion care services requires investments to adequately staff facilities, supply the appropriate equipment and medication, and train staff in how to provide postabortion care according to World Health Organization guidelines. Finally, the researchers recommend that policymakers discussing Malawi’s abortion law consider the full range of available evidence on maternal deaths and injury, and they suggest that expanding access to safe abortion care could reduce the number of women who experience complications from unsafe abortion.

"Incidence of Induced Abortion in Malawi, 2015," by Chelsea Polis et al., is available online in PLOS ONE.

This study was made possible by grants from the UK Government, the Dutch Ministry of Foreign Affairs and the Norwegian Agency for Development Cooperation. The findings and conclusions contained in the study do not necessarily reflect the positions and policies of the donors.

Incidence of Induced Abortion in Malawi, 2015

Abortion and Postabortion Care in Malawi