Worldwide, 25 million unsafe abortions (45% of all abortions) occurred every year between 2010 and 2014, according to a new study by the World Health Organization (WHO) and the Guttmacher Institute published today in The Lancet. The majority of unsafe abortions, or 97%, occurred in developing countries in Africa, Asia and Latin America.

"Increased efforts are needed, especially in developing regions, to ensure access to contraception and safe abortion," says Dr Bela Ganatra, lead author of the study and a scientist in the WHO Department of Reproductive Health and Research.

"When women and girls cannot access effective contraception and safe abortion services, there are serious consequences for their own health and that of their families. This should not happen. But despite recent advances in technology and evidence, too many unsafe abortions still occur, and too many women continue to suffer and die."

The new Lancet study provides estimates on safe and unsafe abortions globally. For the first time, it includes sub-classifications within the unsafe abortion category as less safe or least safe. The distinction allows for a more nuanced understanding of the different circumstances of abortions among women who are unable to access safe abortions from a trained provider. 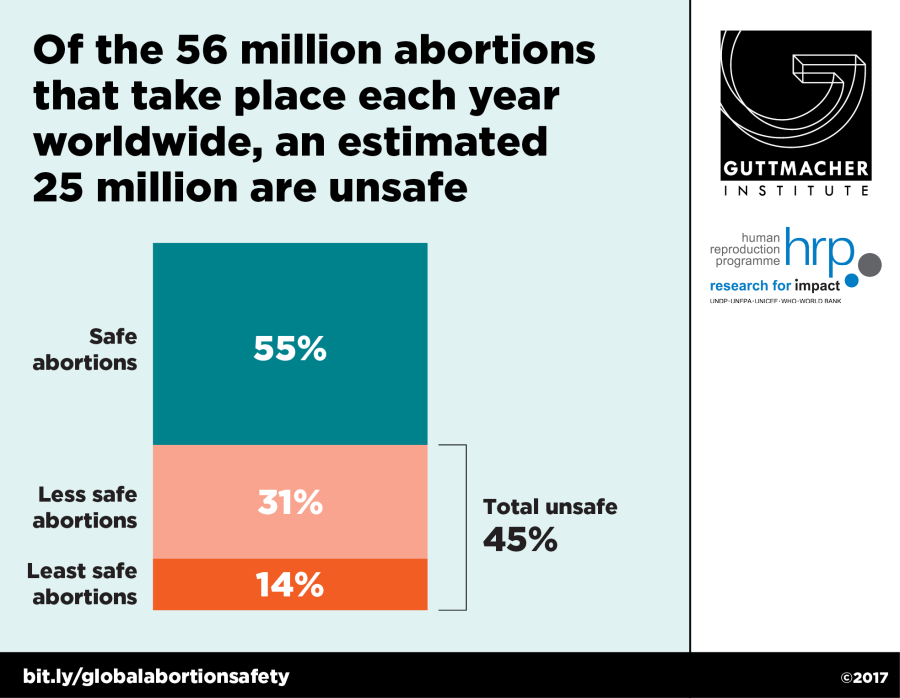 When abortions are performed in accordance with WHO guidelines and standards, the risk of severe complications or death is negligible. Approximately 55% of all abortions from 2010 to 2014 were conducted safely, which means they were performed by a trained health worker using a WHO-recommended method appropriate to the pregnancy duration.

Almost one-third (31%) of abortions were "less safe," meaning they were either performed by a trained provider using an unsafe or outdated method such as "sharp curettage", or by an untrained person albeit using a safe method like misoprostol, a drug that can be used for many medical purposes, including to induce an abortion.

About 14% were "least safe" abortions provided by untrained persons using dangerous methods, such as introduction of foreign objects and use of herbal concoctions. Deaths from complications of unsafe abortion were high in regions where most abortions happened in the least safe circumstances. Complications from "least-safe" abortions can include incomplete abortion (failure to remove all of the pregnancy tissue from the uterus), haemorrhage, vaginal, cervical and uterine injury, and infections.

Most abortions that take place in Western and Northern Europe and North America are safe. These regions also have some of the lowest abortion rates. Most countries in these regions also have relatively permissive laws on abortion; high levels of contraceptive use, economic development, and gender equality; as well as high-quality health services – all factors that contribute to making abortion safer.

"Like many other common medical procedures, abortion is very safe when done in accordance with recommended medical guidelines and that is important to bear in mind," says Dr Gilda Sedgh, co-author of the study and principal research scientist, Guttmacher Institute.

"In the high-income countries of North America and Western and Northern Europe, where abortion is broadly legal and health systems are strong, the incidence of unsafe abortions is the lowest globally."

Among developing regions, the proportion of abortions that were safe in Eastern Asia (including China) was similar to developed regions. In south-central Asia, however, less than 1 in 2 abortions were safe. Outside of Southern Africa, less than 1 in 4 abortions in Africa were safe. Of those unsafe abortions, the majority were characterized as "least safe."

In Latin America, only 1 in 4 abortions were safe, though the majority were categorized as "less safe," as it is increasingly common for women in the region to obtain and self-administer medicines like misoprostol outside of formal health systems. This has meant that this region has seen fewer deaths and fewer severe complications from unsafe abortions. Nevertheless, this type of informal self-use of medication abortion that women have to resort to secretly does not meet WHO’s safe abortion standards.

Unsafe abortion occurs when a pregnancy is terminated either by persons lacking the necessary skills/information or in an environment that does not conform to minimal medical standards, or both.

Provision of safe, legal abortion is essential to fulfilling the global commitment to the Sustainable Development Goal of universal access to sexual and reproductive health (target 3.7). WHO provides global technical and policy guidance on the use of contraception to prevent unintended pregnancy, on safe abortion, and the treatment of complications from unsafe abortion.

Earlier this year, WHO and the Population Division of the United Nations Department of Economic and Social Affairs launched a new, open-access database of laws, policies and health standards on abortion in countries worldwide. The database aims to promote greater transparency of abortion laws and policies, as well as to improve countries’ accountability for the protection of women and girls’ health and human rights.

Global, regional, and subregional classification of abortions by safety, 2010–14: estimates from a Bayesian hierarchical model

Disparities in safety of abortions, by country income

Abortion in Latin America and the Caribbean