Interactive map captures abortion-related policies and data, and categorizes states from most restrictive to most protective

With the US Supreme Court poised to severely curtail or overturn Roe v. Wade, the landmark 1973 decision that confirmed the constitutional right to abortion, the Guttmacher Institute today released a new interactive map to track the legal status of abortion across the United States. The map groups states into seven categories based on their abortion policies, ranging from most restrictive to most protective, and provides information about the specific policies currently in effect in each state.

The new tool is designed to help reporters, policymakers, advocates, researchers and other audiences understand the increasingly complex and rapidly changing landscape of abortion rights and access at the state level. 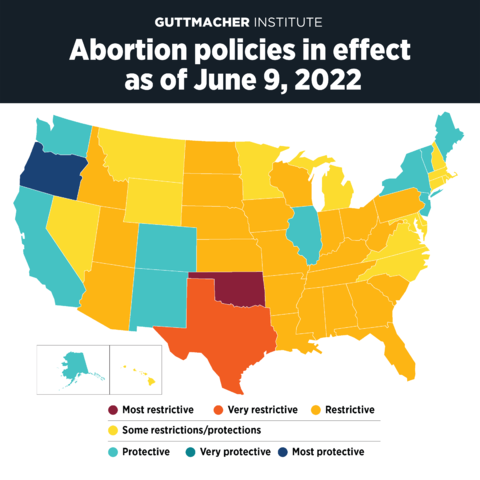 "The landscape of abortion access in the United States is becoming increasingly complex and fragmented. Guttmacher’s new interactive map provides detailed state-level information about abortion rights and access at a time when such information is critically needed," says Dr. Herminia Palacio, President and CEO of the Guttmacher Institute. "Many states already have restrictive policies in place that make it difficult or impossible for individuals to access abortion care, and 26 states are expected to ban abortion quickly if Roe falls. Just last month, Oklahoma became the first state to completely ban abortion with Roe still technically in place. Meanwhile, other states are taking action to protect and expand abortion rights and access, a task that is more important than ever before. Our new map can help make sense of the complex and ever-changing landscape of abortion legality and access nationwide and offers important data on the populations impacted by these changes."

"People in many states have already been contending with a post-Roe reality and this brutal scenario is about to spread further across the country. The fact is that those with the fewest resources and those who are already marginalized bear the brunt of abortion bans and other restrictive state policies," says Elizabeth Nash, Principal Policy Associate, State Issues at the Guttmacher Institute. "We hope this new tool can help provide clarity in what will likely be a time of turmoil if and when Roe v. Wade is no longer officially the law of the land."

By selecting any state on the map, viewers can also see demographic information and key abortion statistics. The data for women of reproductive age* in each state include:

Abortion-related statistics for each state include:

*The use of "women" to refer to the population of people potentially impacted by abortion policies reflects the terminology in the US census, from which many of our data points are drawn. We recognize that gender identities are diverse and not everyone who needs an abortion may identify as a woman. We reflect that reality in our language where we can, while also accurately describing the underlying data.

Resources for Journalists: 15 Points to Consider When Covering Abortion, the Supreme Court and a Potential “Post-Roe World”