Skip to main content
March 2019
Policy Analysis
The time is now. Will you stand up for reproductive health and rights?
Donate Now

On March 12, Reps. Barbara Lee (D-CA), Jan Schakowsky (D-IL) and Diana DeGette (D-CO) reintroduced the Equal Access to Abortion Coverage in Health Insurance (EACH Woman) Act along with 106 cosponsors. First introduced in the 114th Congress, the bill would lift the discriminatory Hyde Amendment and restore insurance coverage of abortion for people enrolled in Medicaid and other federal programs. For the first time, the bill was also introduced in the Senate by lead sponsor Sen. Tammy Duckworth (D-IL) and a group of original cosponsors including Sens. Patty Murray (D-WA), Mazie Hirono (D-HI) and Kamala Harris (D-CA).

The Harmful and Unjust Hyde Amendment

First passed by Congress in 1976, the Hyde Amendment currently bars the use of federal dollars for abortion coverage (except in the extremely limited cases of rape, incest or life endangerment) for people insured by Medicaid, the main public health insurance program for low-income people in the United States, as well as people with disabilities insured through Medicare.

By design, the Hyde Amendment targets low-income people—and, in particular, people of color with low incomes—for harmful and discriminatory treatment. Because of social and economic inequality linked to systemic racism and discrimination, women of color are disproportionately likely to be insured through Medicaid—and therefore subject to the Hyde Amendment’s cruel ban on abortion coverage. Similar restrictions apply to millions of people who obtain their health care or coverage through the federal government, including federal employees, military personnel and veterans, Native Americans, federal prisoners and detainees, Peace Corps Volunteers and low-income residents of the District of Columbia. 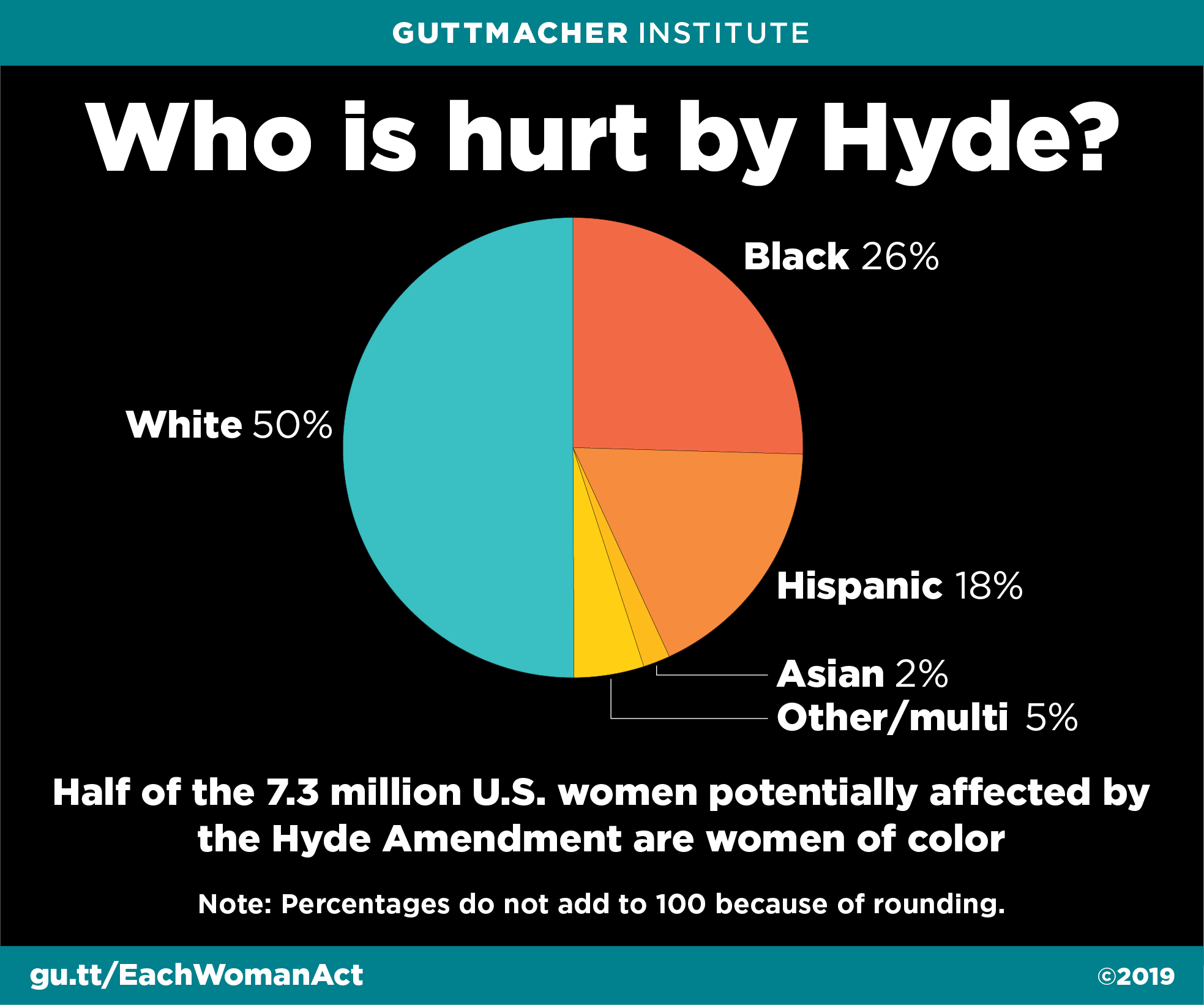 When people are denied insurance coverage of abortion, cost can be a significant barrier to timely and affordable care. On average, an abortion at 10 weeks costs around $500, and the cost increases over time. Associated expenses (such as travel, childcare and time off from work) as well as other abortion restrictions also increase the barriers to care.  As a result, people can get caught in a cruel cycle in which the delays associated with raising the money to pay for an abortion lead to additional costs and delays. People struggling to pay for abortion care report diverting money from other urgent needs such as paying rent and utilities or even feeding their family.

The harmful impact of the Hyde Amendment is only alleviated for women who live in one of the 15 states that use their own funds to provide Medicaid coverage of abortion. In 2017, however, the majority (55%) of women of reproductive age enrolled in Medicaid lived in the District of Columbia or one of the 35 states that does not cover abortion except in very limited circumstances. This amounted to roughly 7.3 million women, including three million living below the federal poverty line.

The EACH Woman Act

The EACH Woman Act is the result of long-standing efforts led by women of color to counter the injustice and discrimination of the Hyde Amendment. It reflects the principle that abortion is basic health care and should be covered by insurance, whether public or private. Specifically, the bill would restore abortion coverage to people who get their coverage or care through Medicaid and other federal programs.

The bill would also prohibit states and the federal government from interfering in private insurance coverage of abortion, including in the health insurance marketplaces established under the Affordable Care Act (ACA). Twenty-six states currently have ACA marketplace bans in effect, and antiabortion policymakers at the federal level are relentless in their efforts to enact nationwide restrictions on abortion coverage. The EACH Woman Act would restore private insurers’ ability to include abortion coverage in the plans they offer to consumers, free from government interference.

The bill is a proactive measure intended to ensure that all people can afford abortion care, regardless of their income level or source of insurance. At the same time, ending the Hyde Amendment and ensuring comprehensive coverage of sexual and reproductive health needs should be part and parcel of efforts to reform the U.S. health care system.

In Real Life: Federal Restrictions on Abortion Coverage and the Women They Impact

Ensuring Access to Abortion at the State Level: Selected Examples and Lessons