Skip to main content
February 2020
Policy Analysis
The time is now. Will you stand up for reproductive health and rights?
Donate Now

On April 14, 2021, the Biden-Harris administration released a notice of proposed rulemaking to overhaul restrictive Trump-era regulations, collectively known as the "domestic gag rule," that have had a devastating impact on the Title X national family planning program. Asserting that the Trump-era regulations "have undermined the public health of the population the program is meant to serve," the U.S. Department of Health and Human Services intends to restore Title X back to its pre-Trump regulatory framework, with "several modifications needed to strengthen the program and ensure access to equitable, affordable, client-centered, quality family planning services for all clients, especially for low-income clients." The rule is open to comments through May 17, and the Trump-era regulations remain in effect for now.

On January 28, 2021, the Biden-Harris administration took its first step toward rescinding the "domestic gag rule"—the destructive Trump-Pence administration overhaul of regulations governing the Title X national family planning program. President Biden signed a presidential memorandum directing the U.S. Department of Health and Human Services to review those regulations and consider whether to suspend, revise or rescind them; it may take several months to complete this action and restore funding to family planning clinics that were forced out of the Title X program.

New data from the Guttmacher Institute show that the Trump administration’s domestic "gag rule" has slashed the Title X national family planning network’s patient capacity in half, jeopardizing care for 1.6 million female patients nationwide. On the 50th anniversary of the Title X program, a new analysis estimates that roughly one in every four Title X service sites left the network in 2019 because of the domestic gag rule, shorthand for restrictive regulations that prohibit—among other things—referrals for abortion care.

In 2019, an estimated 981 U.S. clinics receiving Title X funding—approximately one-quarter of all sites that received Title X funding as of June 2019—likely left the Title X network because of the gag rule. These numbers are in line with findings from the Kaiser Family Foundation and Power to Decide, now further contextualized with reliable estimates of the proportion of female patients affected.

Based on data available for 910 of those 981 sites, we estimate that these changes reduced the network’s capacity to provide women with contraceptive services by at least 46%, translating to roughly 1.6 million patients. In other words, the impact of the gag rule on the network’s capacity is much greater than it might appear when looking at clinic numbers alone, because the gag rule intentionally targeted clinics specializing in reproductive health care services, sites that also serve the highest volume of contraceptive patients. 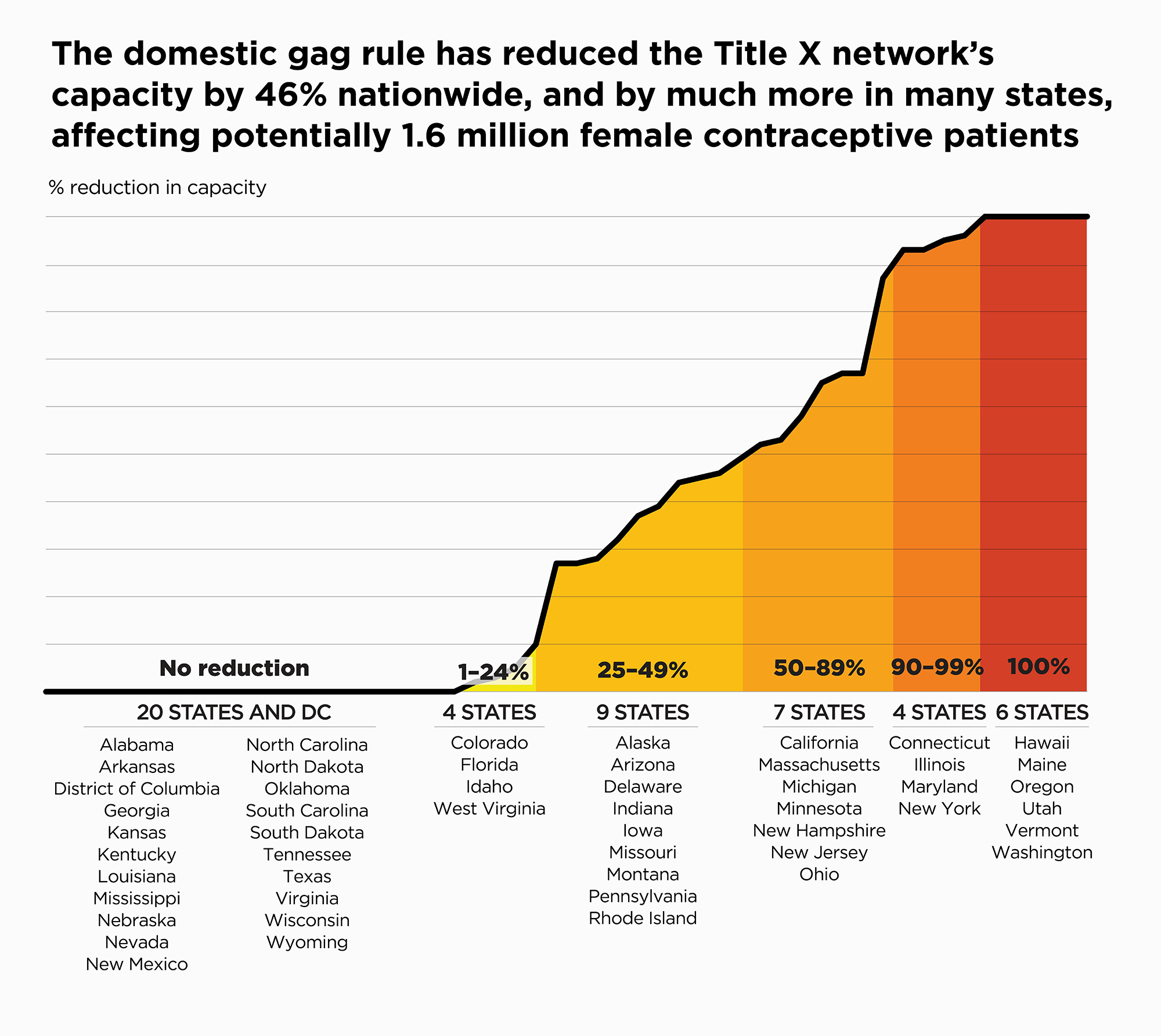 The impact is huge. In 17 states, clinics that left the Title X network because of the gag rule served at least half of the program’s caseload of female contraceptive patients:

In nine states (Alaska, Arizona, Delaware, Indiana, Iowa, Missouri, Montana, Pennsylvania and Rhode Island), the Title X network’s capacity has been reduced by 25–49%. In four states (Colorado, Florida, Idaho and West Virginia), the network’s capacity was reduced by 1–24%. Capacity for the remaining 20 states and the District of Columbia was not impacted, based on the available data.

Despite losing these crucial Title X funds, many providers have employed valiant and creative strategies to continue serving their patients. According to media reports and discussions with providers, clinics have tried a range of options, such as allowing payment on a sliding scale, prioritizing free or low-cost services for young people, and helping patients connect to private or public insurance. But these efforts cannot make up for the havoc wrought by the gag rule, and often carry unexpected bills and confidentiality pitfalls for patients. Some providers have dipped into emergency funds, and some states—including Maryland, Nevada and New Jersey—have passed emergency funding measures. Actions like these to mitigate the negative effects on patients from loss of federal funding are admirable, but ultimately unsustainable.

Finally, some remaining Title X grantees are trying to bring new providers into the network to increase capacity, but we know that other providers—even in areas where they are available—simply do not have the capacity or expertise to absorb this patient load. Contextualizing the attack on Title X in the larger conservative agenda to cut reproductive health care and health care writ large, such as past attempts to chip away at Medicaid via block grants and systemically defund abortion providers, paints an even more dire picture of patients’ dwindling options.

Title X and the Gag Rule

Title X is the nation’s public family planning program, serving millions of patients who seek birth control services, STI testing and treatment, and related preventive care. The program was established as part of the Public Health Service Act in 1970 with the express intent of addressing inequities in access to contraceptives and related services, helping patients advance their right to exercise power over their own reproductive decisions. For half a century, Title X has funded a long-standing and trusted network of providers throughout the country, providing these critical services to patients who are low income, uninsured, young or otherwise underserved.

The Trump administration finalized its targeted dismantling of the Title X program by overhauling the program’s administrative regulations in March 2019, after nearly two years of laying groundwork. Collectively known as the domestic gag rule, these regulations include a prohibition on abortion referrals, coercive counseling standards for pregnant patients, and unnecessary and stringent requirements for the physical and financial separation of Title X–funded activities from a range of abortion-related activities.

On the ground, these changes have the potential to subvert the nationwide network of family planning providers that Title X supports, translate into coercive care for patients, and drastically reduce access to crucial and comprehensive reproductive health care. Many providers have left the network and given up these funds so they may continue to provide the unbiased and complete information, counseling and referral they feel their patients deserve.

Unfortunately, these numbers show just the initial damage that the gag rule has done to the Title X network, and likely represent an undercount, because patient caseload data for some clinics are not available and because the analysis excludes all male patients as well as female patients receiving only noncontraceptive services (such as STI testing or treatment or other preventive gynecologic services). Perhaps the most onerous requirement of the gag rule—strict physical separation from any abortion-related services or provider—looms large over the remaining providers. This final requirement goes into effect March 4, 2020. If it is fully enforced, the network stands to lose additional sites and grantees, representing even more patients left without Title X support for their reproductive health needs.

Meanwhile, affected parties have initiated eight lawsuits to block the gag rule, a strategy that may yet provide relief to the clinics forced to leave the network. Ultimately, patients are caught in the middle—with no care or imperiled care—as the Trump administration’s gag rule continues to eat away at the family planning system created to serve them.

The research in this article was conducted by Mia R. Zolna, Sean Finn and Jennifer J. Frost of the Guttmacher Institute, using data from the Guttmacher Institute and the federal Office of Population Affairs. Full information about the methodology and limitations and a table with state-level findings on clinics that left the network and resulting losses in patient capacity can be found here.

Trends and Differentials in Receipt of Sexual and Reproductive Health Services in the United States: Services Received and Sources of Care, 2006–2019