Reasons for Unmet Need For Contraception in Developing Countries

Fact Sheet
June 2016
Reproductive rights are under attack. Will you help us fight back with facts?
Donate Now

Reasons for Not Using Contraception

—    they are concerned about the side effects or health risks of contraceptive methods;
—    they have sex infrequently or not at all;
—    they or others close to them oppose contraception; and
—    they believe they do not need or should not use contraception if they are breastfeeding, they haven’t resumed menstruation after a birth (i.e., they have postpartum amenorrhea), or both. 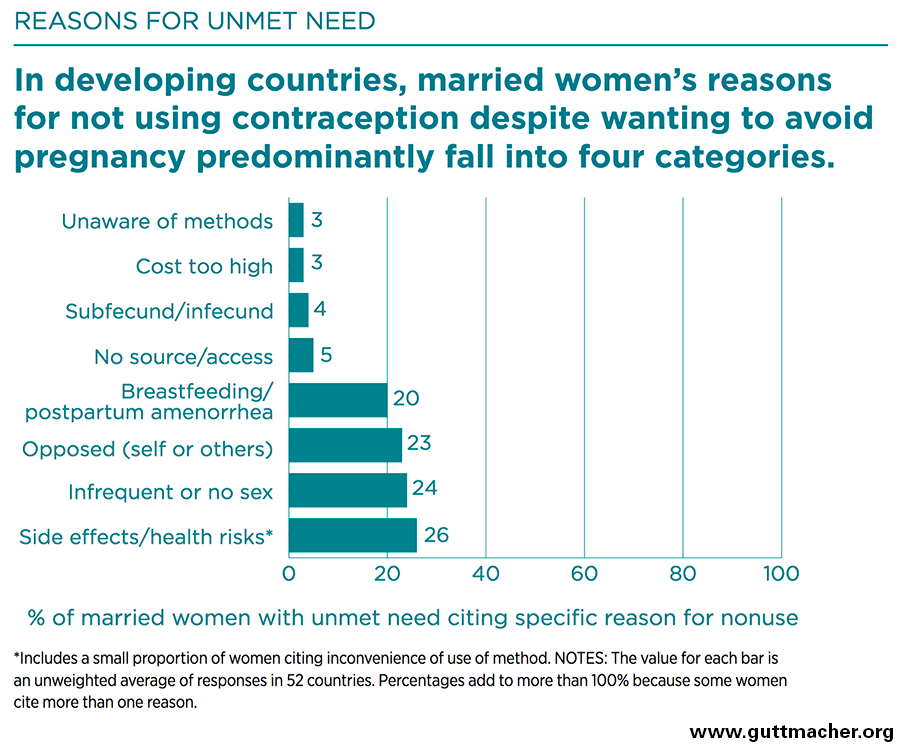 These Responses in More Depth

Trends in Reasons For Unmet Need

Addressing side effects and health concerns

—    Offer a wider range of contraceptive methods at service sites.
—    Increase information and counseling about how modern methods work, the side effects and health risks and benefits associated with each method, and how to switch methods if necessary.
—    Support research and development of new contraceptive technologies or improvements in existing methods.

Serving women who have infrequent sex

—    Create awareness among women regarding their risk of becoming pregnant.
—    Help them choose methods that are most appropriate for the types of relationships they have.
—    Inform women about emergency contraception (pills taken in the first few days after unprotected intercourse) where it is approved, and safe abortion options where they are available.

—    Provide contraceptive counseling and services linked to antenatal and postnatal care that inform women about their risk of pregnancy after a birth and appropriate methods to use postpartum.
—    Offer contraceptive options that are appropriate to women who are breastfeeding.

—    Encourage male involvement in family planning and increased communication among couples regarding their contraceptive needs.
—    Support educational programs for adolescents in diverse settings (health facilities, schools and communities) and through the mass media to address common concerns underlying the nonuse of contraception.

The information in this fact sheet is drawn from Sedgh G et al., Unmet Need for Contraception in Developing Countries: Examining Women’s Reasons for Not Using a Method, New York: Guttmacher Institute, 2016, https://www.guttmacher.org/report/unmet-need-for-contraception-in-devel….

This fact sheet was made possible by grants from the Dutch Ministry of Foreign Affairs and the UK Government. The views expressed are those of the authors and do not necessarily reflect the official policies of the donors.

Unmet Need for Contraception in Developing Countries: Examining Women’s Reasons for Not Using a Method

Why are married women with unmet need in developing countries not using any contraceptive method?