Sexually active women in developing countries who have an unmet need for contraception, meaning they wish to avoid pregnancy but are not using any contraceptive (traditional or modern), generally cite one of several key reasons for not using a method, according to a new report published by the Guttmacher Institute. The report, Unmet Need for Contraception in Developing Countries: Examining Women’s Reasons for Not Using a Method, is based on research conducted by Gilda Sedgh and colleagues.

Findings show that the most common reasons married women with unmet need cite for not using a method are concerns about side effects and health risks (26%), and the belief that they have sex too infrequently to warrant use (24%). A large share say that they are breastfeeding or have not resumed menstruation since their last birth (that is, they have postpartum amenorrhea) (20%). In contrast, the inability to access contraceptives is a relatively uncommon reason for nonuse (5%). Overall, sexually active never-married women with unmet need cite reasons similar to those cited by married women for nonuse, although many also say they don’t use contraceptives simply because they are "not married." 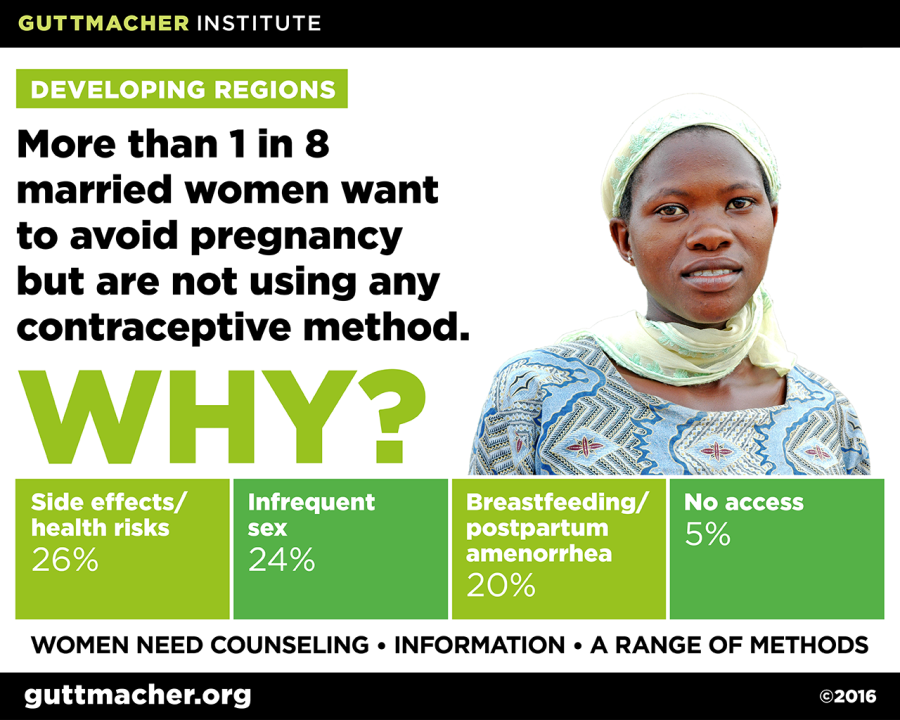 Using data from Demographic and Health Surveys conducted in 52 countries (32 in Africa, 13 in Asia and seven in Latin America and the Caribbean) between 2005 and 2014, the researchers were able to analyze married women’s reasons for not using contraception as well as trends in reasons over time. They were also able to analyze the reasons for nonuse among sexually active never-married women in 31 of those countries (23 in Africa, seven in Latin America and the Caribbean, and one in Asia).

One-third of married women with unmet need in Asia cite infrequent sex as a reason for not using contraception, and in Africa, one-fifth do so. In 12 countries, this is the most commonly cited reason among married women. Yet about half of the women citing infrequent sex as their reason for nonuse were sexually active within the past three months, which suggests that many women in this group may be underestimating their risk of becoming pregnant.

Among sexually active never-married women with unmet need, infrequent sex is the most common reason given for nonuse (cited by 41%), followed by the reason "not married" (29%). Women may give the latter reason because they are not having sex regularly or they believe it would be socially unacceptable for them to obtain contraceptives, or because family planning providers deny contraceptive services to unmarried women.

"It is essential that family planning providers offer women and couples contraceptive counseling that includes accurate information about potential side effects and how to address them," said Gilda Sedgh, principal research scientist at the Guttmacher Institute and the study’s lead author. "Moreover, providers should ensure that all women—married and unmarried—are able to choose from a wide range of contraceptive options so that they can select a method that best suits their needs. It is equally crucial that women are given the opportunity to switch methods if the first contraceptive they try doesn’t end up working for them."

In 12 countries, breastfeeding, postpartum amenorrhea or both is the most commonly cited reason for not using contraception among married women. Eleven of these countries are in Africa, where fertility rates are high and prolonged breastfeeding is common, and where this reason is reported more commonly than in other regions. However, many of the women citing this reason for nonuse may have incorrect perceptions about not needing contraception: Fewer than half of them meet the criteria for lactational amenorrhea as protection against pregnancy. This means that a large share of those citing this reason are underestimating their risk of becoming pregnant, unless they are practicing postpartum abstinence.

Overall, one in 10 women aged 15–49 in developing regions wish to avoid a pregnancy but are not using any contraceptive method. Addressing their reasons for nonuse should inform family planning programs’ efforts to satisfy this need. The authors suggest a range of possible responses to address each reason for nonuse. These include improving counseling that addresses specific concerns—real and imagined—about side effects and health risks; ensuring women are informed about their fertility and pregnancy risk; and helping women choose contraceptive methods that are most appropriate for the types of relationships they have.

The full report, Unmet Need for Contraception in Developing Countries: Examining Women’s Reasons for Not Using a Method, by Gilda Sedgh, Lori S. Ashford and Rubina Hussain, is available online.

This report was made possible by grants from the Dutch Ministry of Foreign Affairs and the UK Government. The views expressed are those of the authors and do not necessarily reflect the official policies of the donors.

Unmet Need for Contraception in Developing Countries: Examining Women’s Reasons for Not Using a Method

Reasons for Unmet Need For Contraception in Developing Countries

Why are married women with unmet need in developing countries not using any contraceptive method?