Fungibility-Based Attacks on Family Planning Services Are Flawed, Hypocritical and Harmful to Women

New Analysis Examines Long History of These Attacks, Argues That Ultimate Way to Counter Them Is to Repeal Hyde and Helms Amendments

For four decades, opponents of reproductive health and rights have invoked the concept of fungibility to deny public family planning funds to health care providers that use other funding sources for abortion or related services. Underlying this argument is the presumption that any public funding such organizations receive frees up money for other purposes, in this case abortion.

A new analysis in the Guttmacher Policy Review traces the history of these attacks and the many different ways fungibility has been used as a pretext to deny public funding to certain health care providers as part of a larger campaign to restrict and stigmatize abortion care and to undermine family planning programs more generally.

With federal funding for abortion already severely restricted under the Hyde and Helms Amendments, variations of the fungibility argument have been deployed expansively since the late 1970s to attack family planning programs and providers at the international, federal and state levels.

The analysis discusses the many flaws in the fungibility argument, including the hypocrisy of arguing this point only in relation to family planning and abortion providers and not, for instance, federal funding for religious groups or other government-subsidized activities. The analysis also notes that family planning programs are already severely underfunded and that it is self-defeating for opponents of abortion to target programs that help women avoid unintended pregnancies and thereby the need for abortion.

"Opponents of abortion rights, many of whom also oppose some or all forms of contraception, have turned the assertion that money is fungible into an all-purpose tool to undermine access to reproductive health services," says author Joerg Dreweke. "Over four decades, this argument has served as the justification for a range of attacks at the federal and state levels, with the targets ranging from U.S. international family planning aid and Planned Parenthood to Title X and the Affordable Care Act."

In many cases, these attacks have failed legislatively or have run afoul of legal protections. However, similar efforts, particularly those at the state level, have succeeded in restricting public funding for health care providers that use other funds to offer abortion care or related services. 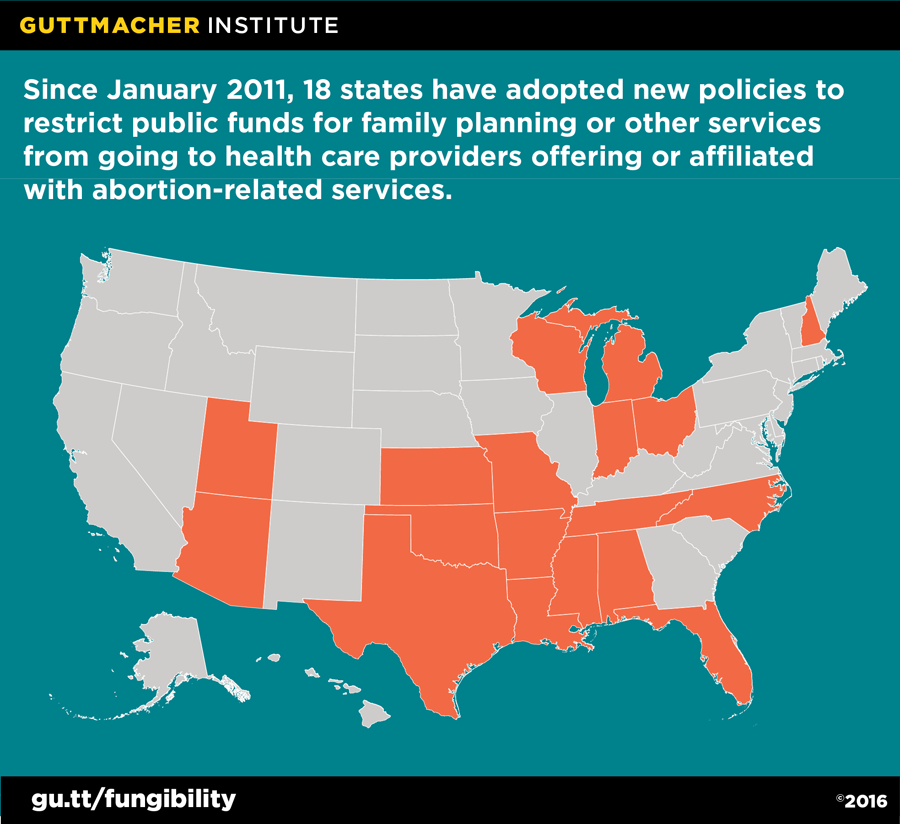 "The most troubling aspect of the fungibility strategy is that, ultimately, it targets not only family planning providers and programs, but the millions of women who rely on them to obtain essential health care," says Dreweke. "The Hyde and Helms Amendments are aimed squarely at those who are poor or otherwise disadvantaged. Fungibility-based attacks are an extension of these harmful policies and likewise target the most vulnerable women, with little or no regard for the potential consequences."

The analysis concludes that repealing the Hyde and Helms Amendments is not only good policy in its own right, but also that restoring direct public funding of abortion is the surest way to put an end to various fungibility-based attacks on family planning providers and programs.

“Fungibility”: The Argument at the Center of a 40-Year Campaign to Undermine Reproductive Health and Rights

The Global Gag Rule and Fights over Funding UNFPA: The Issues That Won’t Go Away

Abortion Restrictions in U.S. Foreign Aid: The History and Harms of the Helms Amendment

Lessons From Texas: Widespread Consequences of Assaults on Abortion Access