According to the first national study of the incidence of abortion and unintended pregnancy in India, an estimated 15.6 million abortions were performed in the country in 2015. This translates to an abortion rate of 47 per 1,000 women aged 15–49, which is similar to the abortion rate in neighboring South Asian countries. The study—published today in The Lancet Global Health—was conducted jointly by researchers at the International Institute for Population Sciences (IIPS), Mumbai; the Population Council, New Delhi; and the New York–based Guttmacher Institute. It also found that the vast majority of abortions (81%) were achieved using medication abortion (which, in India, is commonly referred to as medical methods of abortion, or MMA) that was obtained either from a health facility or another source. Fourteen percent of abortions were performed surgically in health facilities, and the remaining 5% of abortions were performed outside of health facilities using other, typically unsafe, methods.

The study also estimated the incidence of unintended pregnancy in India and found that out of the total 48.1 million pregnancies in 2015, about half were unintended—meaning they were wanted later or not at all. The estimated unintended pregnancy rate was 70 per 1,000 women aged 15–49 in 2015, which is similar to the rates in neighboring Bangladesh (67) and Nepal (68), and much lower than the rate in Pakistan (93).

Unlike previous research on this topic, this study is the first specifically designed to measure the national incidence of abortion in India. The researchers used two direct methods for measuring incidence. One was compiling national sales and distribution data on MMA (mifepristone and mifepristone-misoprostol combipacks), which represents the vast majority of all abortions in India. The second was implementing a large-scale survey of public and private health facilities in six states—Assam, Bihar, Gujarat, Madhya Pradesh, Tamil Nadu and Uttar Pradesh—where close to half of Indian women of reproductive age live. The number of abortions to women who used traditional methods was calculated using indirect measures. 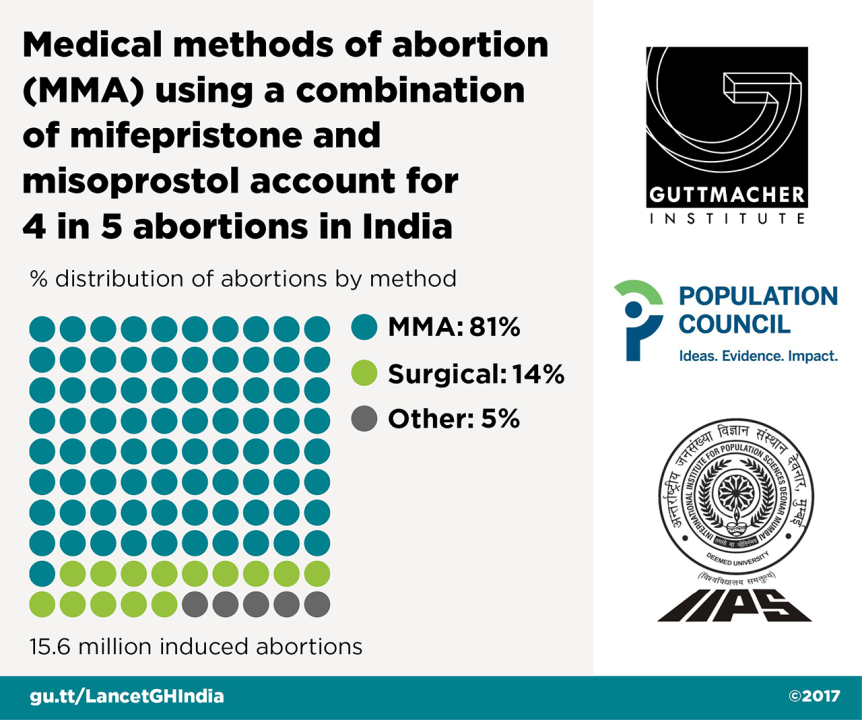 Currently, slightly fewer than one in four abortions are provided in health facilities. The public sector—which is the main source of health care for rural and poor women—accounts for only one-quarter of facility-based abortion provision, in part because many public facilities do not offer abortion services.

Close to three in four abortions are achieved using MMA drugs from chemists and informal vendors, rather than from health facilities. MMA is safe and effective when used in accordance with World Health Organization guidelines. For example, according to clinical studies, an MMA regimen that combines misoprostol and mifepristone is 95–98% effective when used correctly and within a nine-week gestational limit.

"Women in India face considerable challenges trying to obtain abortion care, including the limited availability of abortion services in public health facilities," says Dr. Susheela Singh, vice president for international research at the Guttmacher Institute and co–principal investigator of the study. "Our findings suggest that a shortage of trained staff and inadequate supplies and equipment are the primary reasons many public facilities don’t provide abortion care."

The study proposes a number of steps to improve the availability and quality of abortion services in health facilities, including training and certifying more doctors to provide abortion care. The study also recommends permitting nurses, AYUSH doctors (practitioners of indigenous medicine) and auxiliary nurse midwives to provide MMA. This would substantially expand the number of providers—and facilities—qualified to offer safe abortion services. The authors also note the importance of ensuring that public health facilities have the equipment and drug supplies necessary to provide surgical abortion care and MMA. To address the needs of the millions of women choosing to obtain MMA from sources other than health facilities, the authors urge the implementation of strategies that will provide women with accurate information about how to use the method safely. Finally, the study recommends improving the quality of contraceptive services, including by offering a wide range of contraceptive methods and providing counseling to help individuals prevent the pregnancies they do not want and achieve their reproductive goals.

"The Incidence of Abortion and Unintended Pregnancy in India, 2015," by Susheela Singh et al., is available online in The Lancet Global Health.

This article is part of a larger study, entitled A National Assessment of the Incidence of Induced Abortion and Unintended Pregnancy in India, which is the most comprehensive study to date on the incidence of abortion and unintended pregnancy in India. A national report, six state-level reports and several other peer-reviewed articles will be released in 2018.

This news release is also available in Hindi.

The Incidence of Abortion and Unintended Pregnancy in India, 2015

Abortions in India by method, 2015