Skip to main content
July 2016
Policy Analysis
The time is now. Will you stand up for reproductive health and rights?
Donate Now 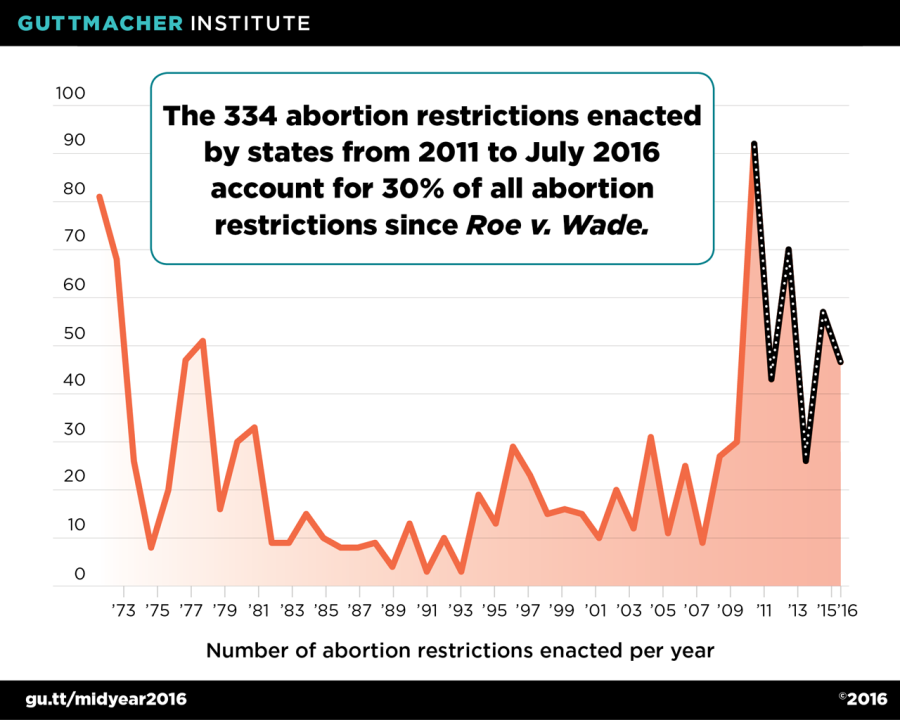 The first half of the year ended on a high note, with the U.S. Supreme Court handing down the most significant abortion decision in a generation. The Court’s ruling in Whole Woman’s Health v. Hellerstedt struck down abortion restrictions in Texas requiring abortion facilities in the state to convert to the equivalent of ambulatory surgical centers and mandating that abortion providers have admitting privileges at a local hospital; these two restrictions had greatly diminished access to services throughout the state (see Lessons from Texas: Widespread Consequences of Assaults on Abortion Access). Five other states (Michigan, Missouri, Pennsylvania, Tennessee and Virginia) have similar facility requirements, and the Texas decision makes it less likely that these laws would be able to withstand judicial scrutiny (see Targeted Regulation of Abortion Providers). Nineteen other states have abortion facility requirements that are less onerous than the ones in Texas; the fate of these laws in the wake of the Court’s decision remains unclear.

As important as the Whole Woman’s Health decision is, and will be going forward, it is far from the only good news so far this year. Legislators in 19 states introduced a bevy of measures aimed at expanding insurance coverage for contraceptive services. In 13 of these states, the proposed measures seek to bolster the existing federal contraceptive coverage requirement by, for example, requiring coverage of all FDA-approved methods and banning the use of techniques such as medical management and prior authorization, through which insurers may limit coverage. But some proposals go further and plow new ground by mandating coverage of sterilization (generally for both men and women), allowing a woman to obtain an extended supply of her contraceptive method (generally up to 12 months), and/or requiring that insurance cover over-the-counter contraceptive methods. By July 1, both Maryland and Vermont had enacted comprehensive measures, and similar legislation was pending before Illinois Gov. Bruce Rauner. And, in early July, Hawaii Gov. David Ige signed a measure into law allowing women to obtain a year’s supply of their contraceptive method.

But the Assault Continues

Even as these positive developments unfolded, the long-standing assault on sexual and reproductive health and rights continued apace. Much of this attention focused on the release a year ago of a string of deceptively edited videos designed to discredit Planned Parenthood. The campaign these videos spawned initially focused on defunding Planned Parenthood and has grown into an effort to defund family planning providers more broadly, especially those who have any connection to abortion services. Since last July, 24 states have moved to restrict eligibility for funding in several ways:

The first half of 2016 was also noteworthy for a raft of attempts to ban some or all abortions. These measures fell into four distinct categories:

Trends in the States: First Quarter 2016