Skip to main content
April 2021
Policy Analysis
The time is now. Will you stand up for reproductive health and rights?
Donate Now

After years of dramatic improvement under the Affordable Care Act (ACA), the uninsured rate for people of reproductive age ticked upward under destructive Trump-era policies. Moreover, major disparities in the uninsured rates remain by income, race and ethnicity, and citizenship. To improve the health of U.S. residents—including their sexual and reproductive health—the Biden-Harris administration, Congress and state policymakers must work together to pursue additional expansions to public and private insurance.

Expansions to health insurance coverage are crucial for sexual and reproductive health and rights. Medicaid and private insurance include strong coverage protections for family planning, maternity care, STI-related services, testing and treatment for reproductive cancers, and many other key services commonly used by people in their reproductive years and beyond. In some states, these protections also include abortion coverage: Although the Hyde Amendment and similar restrictions bar federal funding for abortion coverage, 16 states direct Medicaid to pay for all or most medically necessary abortions with state funds, and six states require abortion coverage in private health insurance plans.

According to a Guttmacher Institute analysis of the most recent government data, 14% of people, or 21.5 million individuals, in the United States aged 15–49 were uninsured in 2019. At first glance, that represents tremendous progress from the 22% who were uninsured in 2013; the progress was driven by the ACA’s major expansions to Medicaid and subsidized private insurance coverage. However, this progress stalled and reversed slightly under the Trump-Pence administration; the uninsured rate for people of reproductive age increased by nearly a percentage point between 2016 and 2019 (see figure 1). 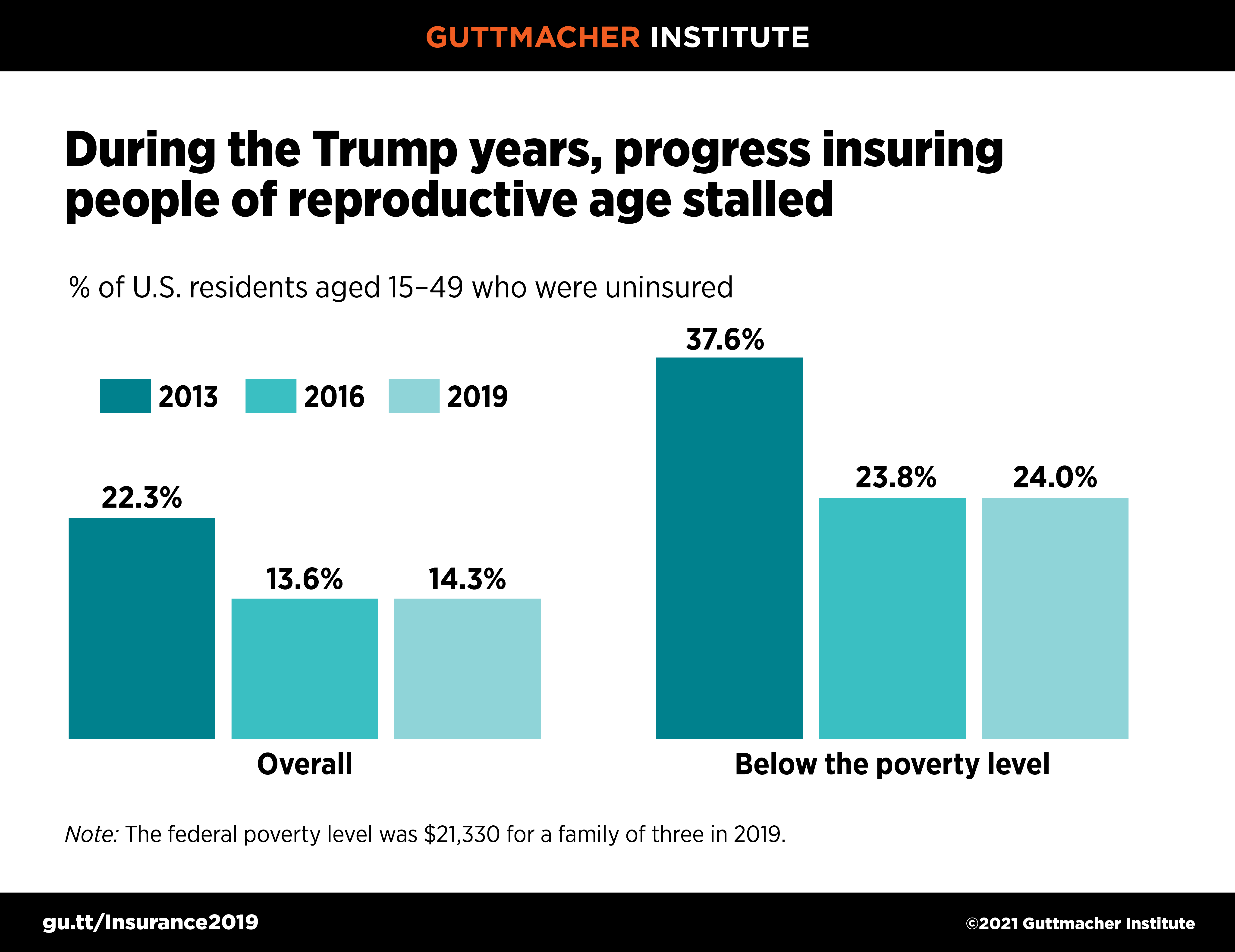 Progress has also halted since 2016 on reducing long-standing disparities in coverage. In 2019, one in four people aged 15–49 with family incomes below 100% of the federal poverty level were uninsured, about twice the rate of higher-income people. Hispanic people aged 15–49 were far more likely than White, Black or Asian people to be uninsured (see background tables). Similarly, immigrants aged 15–49 who were not citizens had three times the uninsured rate of U.S.-born people or naturalized citizens. Furthermore, those inequities intersect, magnifying their harm: For example, 50% of low-income noncitizens aged 15–49 were uninsured in 2019, as were 37% of low-income Hispanic people in that age-group.

Improvements in insurance coverage since 2013 are connected to the ACA’s coverage expansions, particularly the major Medicaid expansion that has been adopted by 38 states and the District of Columbia. Collectively, the states that implemented the ACA’s Medicaid expansion experienced steeper declines since 2013 and had about half the uninsured rate in 2019 (11% vs. 20%) than nonexpansion states (see figure 2). 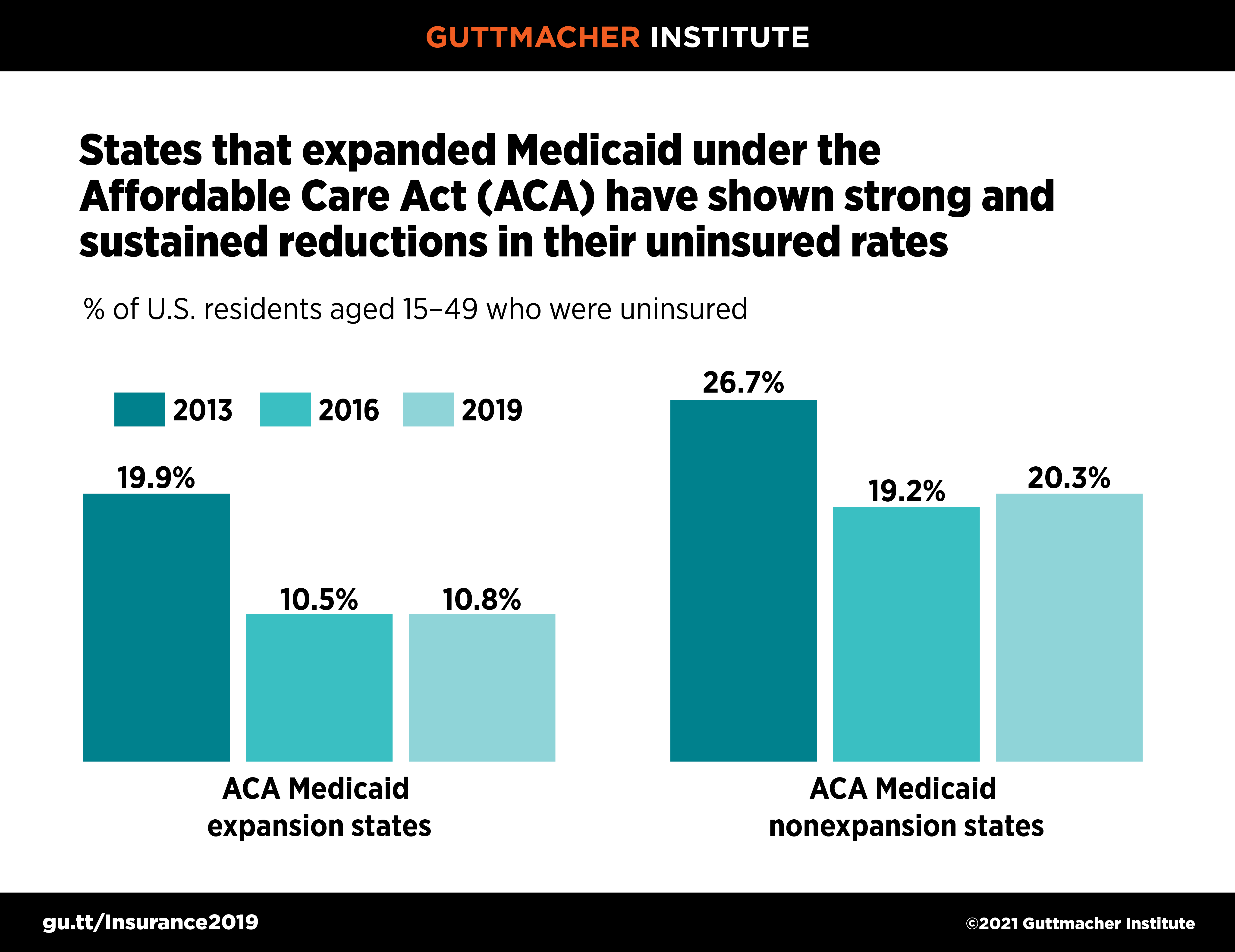 During the Trump era, expansion states fared slightly better than nonexpansion states. Overall, 20 states showed statistically significant increases in their uninsured rate between 2016 and 2019, and only three states had significant declines—two of which, Louisiana and Virginia, expanded Medicaid during that time period (see background tables).

How to Close the Gaps

Making further progress on closing gaps in U.S. health insurance coverage will require action on two fronts. First, the Biden-Harris administration and Congress must reverse harmful Trump-era policies (such as Medicaid work requirements and sweeping exemptions to contraceptive coverage) and address the potential harm from a looming U.S. Supreme Court decision on the ACA.

Second, federal and state policymakers must work toward additional expansions to public and private insurance. That could include incremental improvements to the ACA and Medicaid, following the model of the American Rescue Plan Act, which provided new incentives for holdout states to expand Medicaid, gave states authority to extend Medicaid postpartum coverage to 12 months and expanded subsidies for ACA marketplace health plans. That could also include bolder policies, such as one based on President Biden’s proposal for a new public health insurance option or a single-payer solution such as Medicare for All. Regardless of the approach, policymakers must ensure that all health insurance coverage upholds core principles of sexual and reproductive health and rights so that everyone can get the care they want and need.

The research in this article was conducted by Ayana Douglas-Hall and Mira Tignor of the Guttmacher Institute, using data from the U.S. Census Bureau’s American Community Survey. The attached background tables include additional data on insurance status by demographic group and by state for all people aged 15–49, women aged 15–49 and men aged 15–49.

In Real Life: Federal Restrictions on Abortion Coverage and the Women They Impact