Skip to main content
June 2022
Policy Analysis
The time is now. Will you stand up for reproductive health and rights?
Donate Now

Even before a leaked US Supreme Court draft opinion made it clear that a majority of the justices are poised to overturn Roe v. Wade, abortion-related measures had already soared to the top of state legislative agendas across the country in the first six months of 2022. Many of these laws sharply curtail abortion rights and access to care, and some criminalize actions that help someone seek an abortion. These bans make it impossible for people in many states—particularly individuals with low incomes and those from Black, Latino and Asian communities—to obtain an abortion at a clinic without traveling hundreds of miles.

To fight back against the anti-abortion onslaught, a number of states passed legislation to protect and expand the right to abortion care. Meanwhile, there has been a continued assault on civil rights in some states with legislation aimed at harming transgender youth. Also, several states expanded pregnancy and postpartum care.

Including the 43 abortion restrictions in 12 states enacted in the first half of 2022, there have been a total of 1,381 restrictions enacted since Roe v. Wade was decided in 1973. The restrictions passed in 2022 amplify the harms of earlier ones: Each additional restriction increases patients’ logistic, financial and legal barriers to getting an abortion, especially in regions where entire clusters of states have heavily limited abortion access already.

Many of the 2022 restrictions belong to one of two categories: general abortion bans and restrictions on medication abortion. 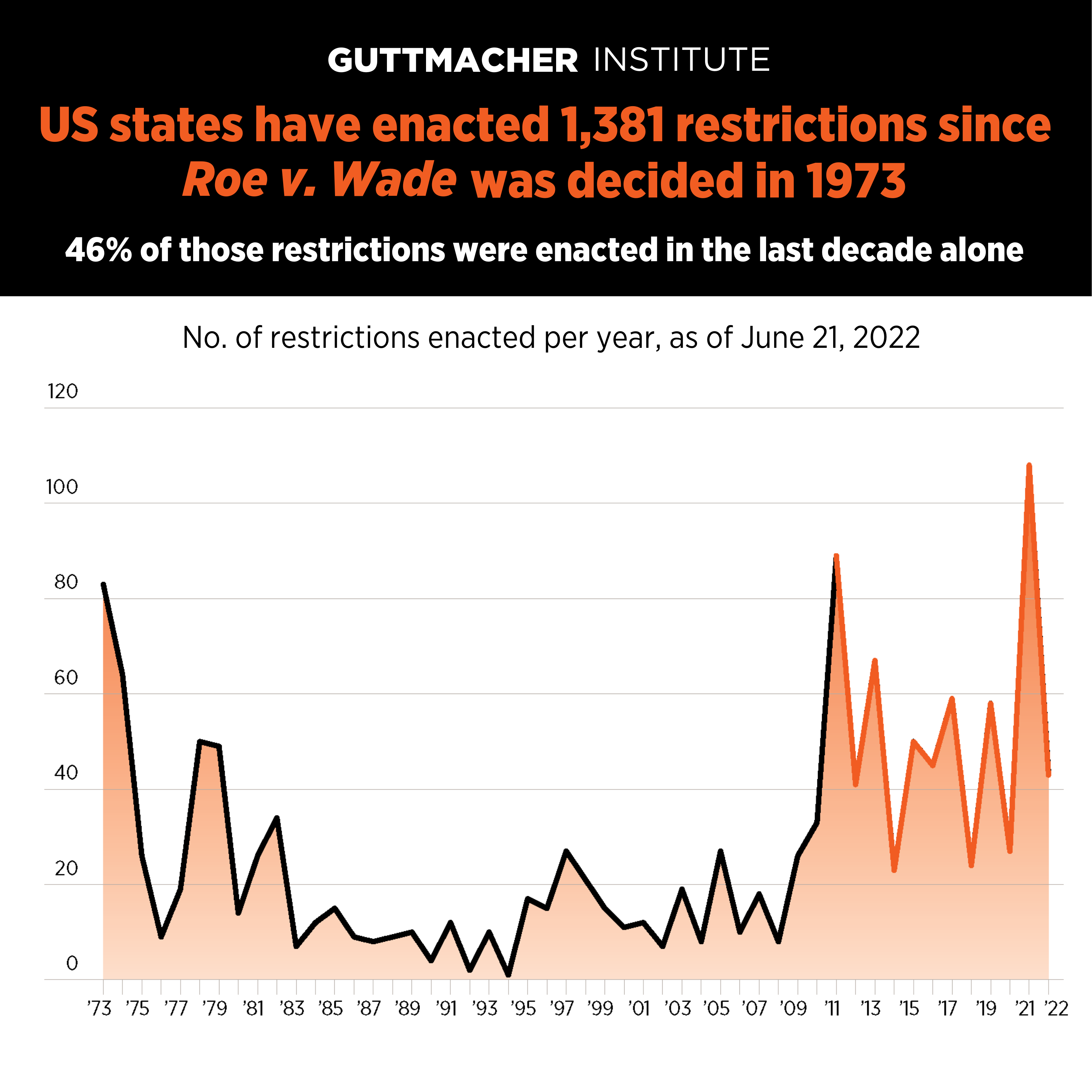 General bans. Eight of the 43 abortion restrictions enacted in the first half of 2022 are laws that apply to abortions performed throughout pregnancy, at six weeks or later, or at 15 weeks or later. These include:

Medication abortion restrictions. Some states have focused on enacting restrictions on medication abortion, likely because more people are relying on this critically important method. Guttmacher research shows that following two decades of safe and effective use, medication abortion accounted for 54% of all US abortions in 2020—powerfully illustrating that the method has gained broad acceptance from both abortion patients and providers.

Three states passed a total of 18 restrictions on medication abortion in the first half of the year: 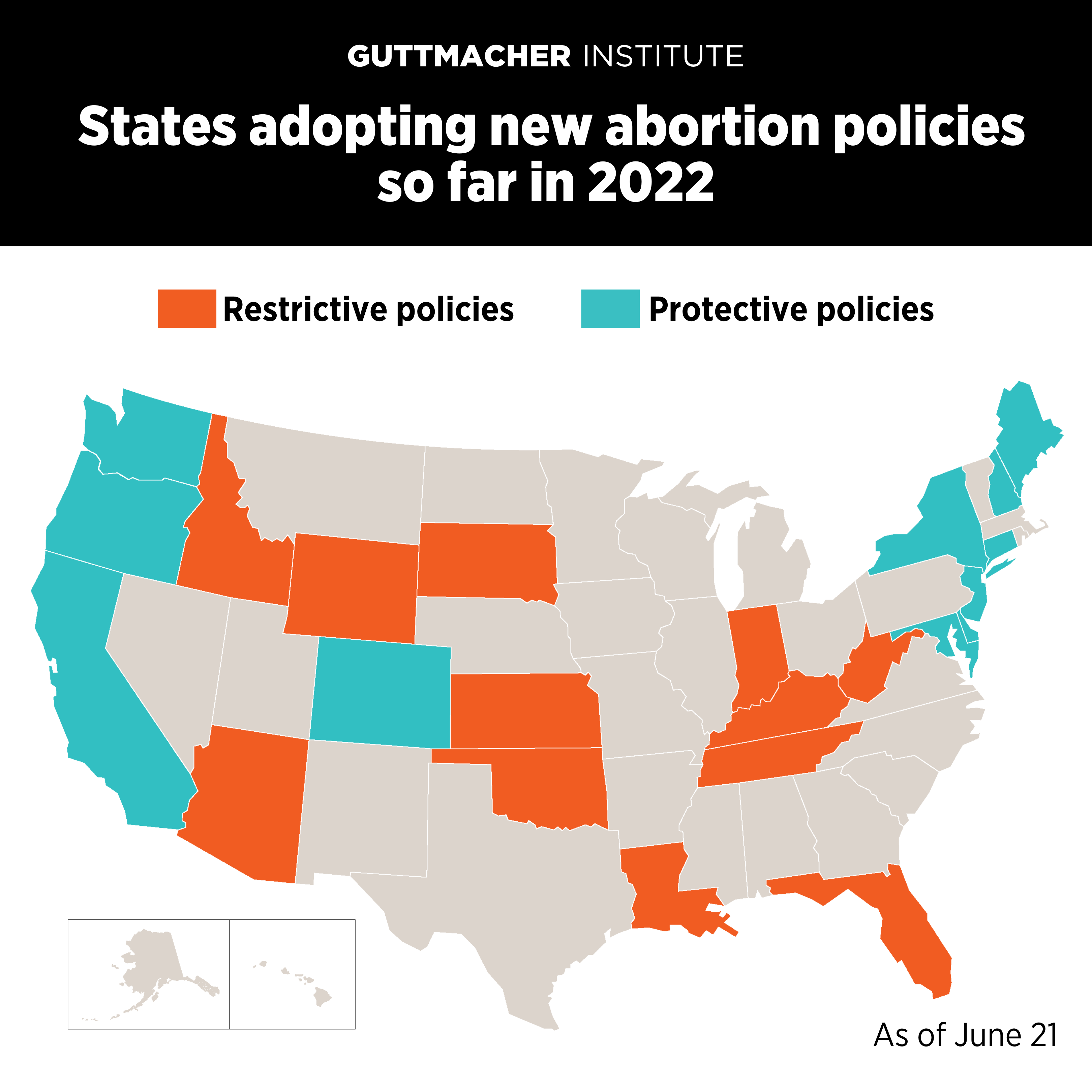 ​Attacks on Transgender Health and Rights

A dozen states enacted laws to expand pregnancy and postpartum care during the first half of 2022, including:

The right to obtain an abortion is in serious jeopardy across much of the United States. If, as expected, the Supreme Court guts Roe v. Wade, access to services in many states already hostile to abortion will become virtually nonexistent. In addition to Oklahoma, 25 other states are certain or likely to ban abortion. Thirteen states, including Oklahoma, have "trigger" bans set to go into effect shortly after a decision that overturns Roe. Patients across the country will have to travel far distances to access abortion care in a clinic, and some may turn to medication abortion from online providers. The six-week ban in Texas and the total ban in Oklahoma have already strained the abortion clinic network in many other states, and providers in states that maintain abortion access will be further overwhelmed.

Meanwhile, many state legislatures already supportive of abortion rights are likely to pass additional laws protecting abortion. The almost-certain result is a sharply divided country in which hundreds of thousands of individuals every year will find it impossible to obtain an abortion. People who will be harmed the most are those who face systemic oppression and insufficient access to health care, including low-income individuals; Black, Latina and Asian patients; young people; and LGBTQ individuals.

State Bans on Abortion Throughout Pregnancy