In 2017, 40% of high school students in the United States reported that they had ever had sex, the lowest levels of sexual behavior observed since these data were first collected in 1991, according to "Sexual Behavior and Contraceptive and Condom Use Among U.S. High School Students, 2013‒2017," by Guttmacher researchers Elizabeth Witwer, Rachel Jones and Laura Lindberg. Among sexually active students in 2017, nearly nine in 10 had used a contraceptive method the last time they had sex, including a majority (54%) who had used condoms.

The authors analyzed data from the 2013, 2015 and 2017 Youth Risk Behavior Survey, a nationally representative survey of U.S. high school students conducted by the Centers for Disease Control and Prevention, to examine recent trends in students’ sexual activity, contraceptive use and experiences of sexual violence.

Declines in the proportion of adolescents who had ever had sex occurred among students of all races and ethnicities between 2013 and 2017, but were most pronounced among black students. In 2017, just 20% of all ninth-graders had ever had sex, compared with a majority of 12th-graders (57%), reflecting the fact that as students age, they are more likely to become sexually active. 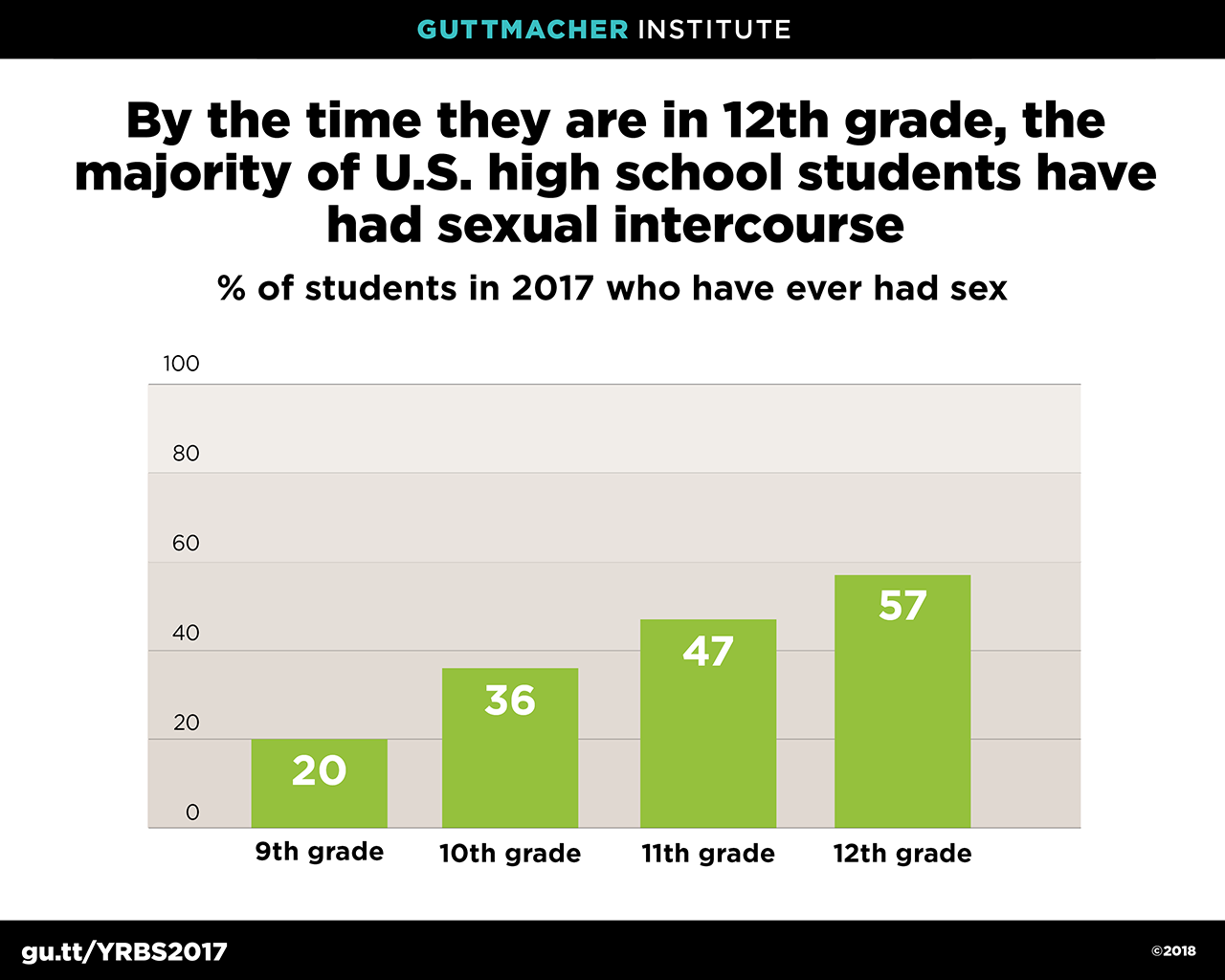 Among sexually active students, 16% of females and 10% of males reported that they had not used a contraceptive method at last sex. Although ninth-graders were less likely than older students to be sexually active, nearly one in five of those who were had not used a method of contraception at last sex, compared with one in 10 12th-graders. All young people, including younger students, need access to information and health care services—including the full range of contraceptive methods—so they can choose the methods that best meet their needs.

Notably, use of long-acting reversible contraceptive (LARC) methods more than doubled, from 2% of female students in 2013 to 5% in 2017, mirroring recent increases in LARC use among older women. Use of condoms, however, declined from 59% of all students in 2013 to 54% in 2017. At a time of increasing STI rates among young people, this decline in condom use warrants further research and efforts to increase education and access.

The survey also found that sexual violence was prevalent among high school students, pointing to the need for additional support for young people in developing healthy sexual relationships. In 2017, one in 10 students reported that they had experienced sexual violence (such as forced kissing, touching or sexual intercourse) in the past year. The proportion of female students who had experienced sexual violence was three times as high as the proportion among male students, and the proportion among students who identified as gay, lesbian or bisexual was nearly three times that of their heterosexual peers.

"Consent is a critical component of sex education, not only to prevent sexual violence, but to promote healthy communication and development of fulfilling relationships," says Jesseca Boyer, Guttmacher policy expert. "All young people need and have the right to information, education, skills and services to support their sexual and reproductive health and well-being."

Sexual Behavior and Contraceptive and Condom Use Among U.S. High School Students, 2013‒2017

Changing Patterns of Contraceptive Use and the Decline in Rates of Pregnancy and Birth Among U.S. Adolescents, 2007–2014

Pregnancies, Births and Abortions Among Adolescents and Young Women in the United States, 2013: National and State Trends by Age, Race and Ethnicity