State-Level Estimates of Contraceptive Use in the United States, 2019

Ayana Douglas-Hall
,
Naomi Li
and
Megan L. Kavanaugh
The time is now. Will you stand up for reproductive health and rights?
Donate Now

Nearly all women in the United States who have ever had sexual intercourse have used a contraceptive method at some point during their reproductive years.1 Estimates presented in this report, which come from the Behavioral Risk Factor Surveillance System (BRFSS), highlight differences in the most effective contraceptive method used at last sex among U.S. women aged 18–49 who are at risk of pregnancy (i.e., those who are sexually active with one or more male partners, are not pregnant or postpartum, and have not had a hysterectomy).

In every state, the majority of women of reproductive age are using some form of contraception. Use estimates for primary methods show wide variability across the states, especially for female sterilization, IUDs, oral contraceptive pills and condoms. Among states with available data, Oregon and Utah have the highest levels of contraceptive use among women at risk of pregnancy, with more than half of women at risk of pregnancy in these two states reporting use of a highly or moderately effective method at last sex.

The BRFSS is a surveillance system that conducts monthly cross-sectional telephone surveys in all 50 states, the District of Columbia and three U.S. territories (Guam, Puerto Rico and the U.S. Virgin Islands). The data, which are publicly available for download on the BRFSS website,3 are collected separately for each jurisdiction using complex sampling designs determined by that jurisdiction and reviewed by the Centers for Disease Control and Prevention (CDC). Landline and cell phone interviews are used to collect retrospective self-reported data from men and women aged 18 and older, and the data are representative of noninstitutionalized adult residents of each jurisdiction.

The tables in this report present basic tabulations of contraceptive method use data from the 2017 and 2019 BRFSS. In 2017, 40 jurisdictions* fielded questions relevant to contraceptive use. In 2019, the same questions were asked in 38 jurisdictions.† Estimates for the District of Columbia and Puerto Rico are included in the report’s tables, but excluded from highlighted state comparisons. We strongly discourage comparisons between states and territories because these two types of jurisdictions do not have comparable capacities for policy implementation. Our analytic sample is limited to female respondents aged 18–49 who reported having been sexually active with one or more male partners (40,406 respondents in 2017 and 36,519 respondents in 2019), by state of residence. More information on the data and methods is available below.

To account for the BRFSS’s multistage, probability-based complex sample design, we applied sampling weights that yielded prevalence estimates representative of resident women aged 18–49 within each state or territory. In addition, we used design variables for the sampling stratum and cluster to obtain correct standard errors for all estimates. Weighted estimates were calculated to determine the proportion of women who reported using contraceptives at last sex among all women and among women at risk of pregnancy. Simple logistic regression was used to compare contraceptive use prevalence within jurisdictions from 2017 to 2019 and between regions of the country in 2019. All analyses were performed using Stata version 16.1.

Contraceptive use by all women

Contraceptive use among women at risk of pregnancy 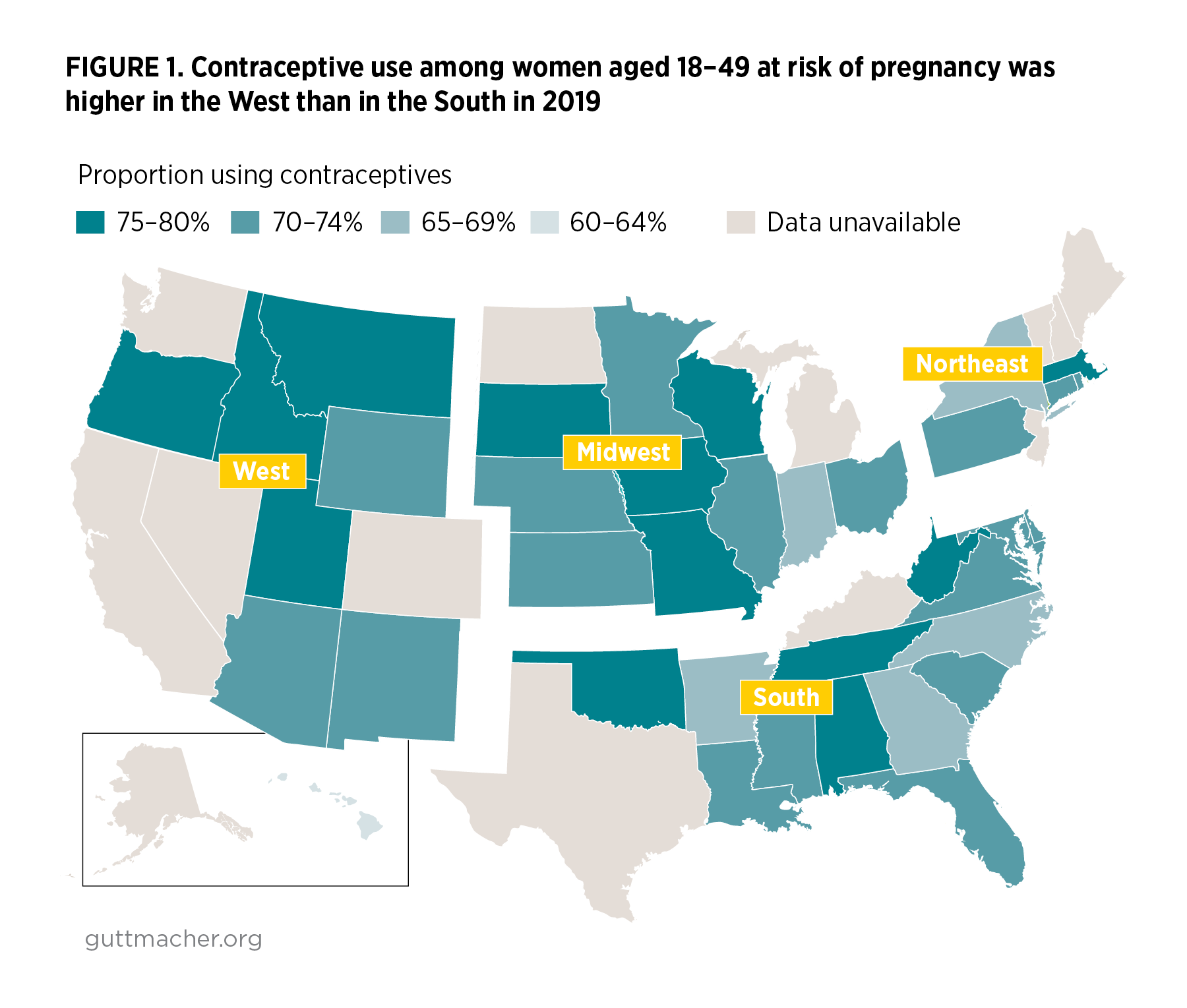 Policies and programs aimed at addressing disparities in sexual and reproductive health outcomes are often designed and implemented at the state level; thus, having state-level data available to illuminate progress toward such goals over time is critical. As the future of federal policies and programs protective of contraceptive access (including the Affordable Care Act and the Title X national family planning program) becomes increasingly uncertain, state-level policies on access to contraceptives may play an increasingly important role in the extent to which individuals are able to realize their contraceptive preferences.7,8 This report highlights wide variation in women’s contraceptive use at the state level as of 2019 and, given the uncertainty noted above, we encourage further research to investigate differences in state-level contraceptive use by individual and context-related characteristics with these and future BRFSS data.

Responses to the question about the primary method used to prevent pregnancy were open-ended and grouped in the coding processes. Responses to the question about the nonuse of contraceptives were similarly open-ended. The specific questions and the coding scheme interviewers used to group respondent answers are listed as an appendix. More detailed information on questionnaires, survey methodology, sample design, response rates, fieldwork procedures and variance estimation is published elsewhere.13,14

‡Multiple method use is not documented in the BRFSS. Because the use of more than one method was not recorded, use of less effective contraceptive methods is underestimated.

4. Pazol K et al., Contraceptive use among women at risk for unintended pregnancy in the context of public health emergencies—United States, 2016, Morbidity and Mortality Weekly Report, 2018, Vol. 67, No. 32.

This report was prepared by Ayana Douglas-Hall, Naomi W. Li and Megan L. Kavanaugh. Chris Olah and Haley Ball edited the report. Rachel Jones and Adam Sonfield offered valuable comments and suggestions. All are of the Guttmacher Institute.

All data for analyses presented here were collected by states with technical and methodological assistance from the Centers for Disease Control and Prevention (CDC). The content is solely the responsibility of the authors and does not necessarily represent the official views of the CDC or state agencies.

Contraceptive Use in the United States by Demographics