Skip to main content
December 2019
Policy Analysis
The time is now. Will you stand up for reproductive health and rights?
Donate Now

In 2019, conservative state legislators raced to enact an unprecedented wave of bans on all, most or some abortions, and by the end of the year, 25 new abortion bans had been signed into law, primarily in the South and Midwest. Along with this new strategy, legislators also continued their efforts to adopt other types of abortion restrictions, including requirements for abortion providers to give patients misleading and inaccurate information about the potential to reverse a medication abortion as part of abortion counseling.

These state-level policy developments to ban or restrict abortion are also an important backdrop as the U.S. Supreme Court considers a Louisiana law in 2020 that requires abortion providers to have admitting privileges at a local hospital. The Louisiana law is identical to a Texas law the Court struck down in 2016, and reversing its own precedent only four years later would raise serious questions about the Court’s integrity and ability to respect settled law. A decision upholding the Louisiana law could also have a significant impact on those seeking abortion care in many parts of the country.

In direct response to efforts to undermine abortion access in other states and in the courts, state legislatures primarily in the Northeast and West, along with Illinois, are moving in the opposite direction. These legislatures have enacted policies that protect abortion rights and expand access to contraceptive services and sex education. This year, 36 measures that protect abortion have been enacted, along with 46 policies intended to decrease maternal mortality, 13 that increase access to contraceptive coverage and 17 that improve sex education. Also, governors in five states vetoed abortion restrictions. The new abortion protections are particularly notable: More were enacted this year than in the entire previous decade. 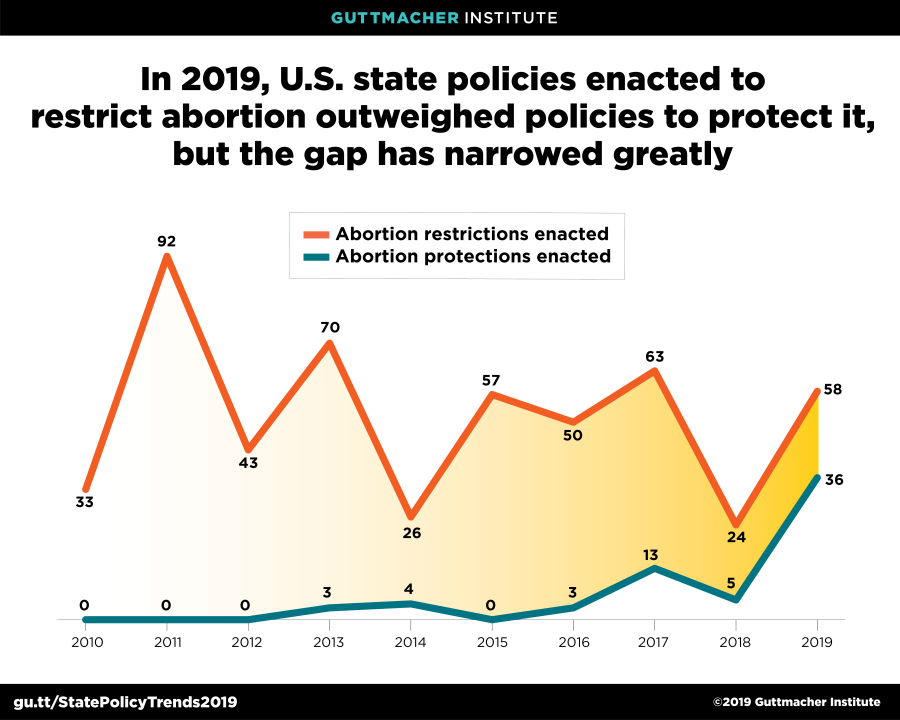 Nearly half of the 58 new abortion restrictions enacted in 2019 would ban all, most or some abortions. This surge in abortion bans is a distinct departure from the strategy deployed by abortion opponents for decades, which was to adopt less sweeping abortion restrictions with a cumulative impact of denying care to patients and forcing clinics to close. The latter approach had led to passage of laws that were less likely to be challenged in court than outright bans. By contrast, supporters of the new wave of abortion bans have made it clear that they are seeking to give the U.S. Supreme Court multiple opportunities to undermine or overturn long-standing constitutional protections for individuals seeking an abortion. 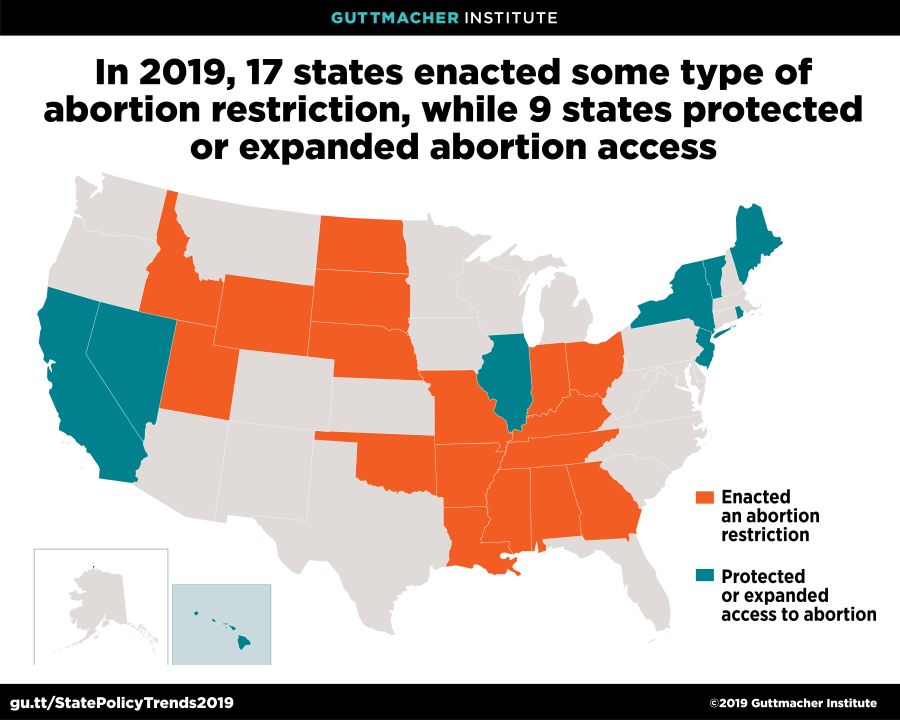 The 25 abortion bans enacted in 12 states in 2019 vary in scope, with some prohibiting abortion after a specific point in pregnancy, others prohibiting a specific method of abortion, and other bans hinging on the patient’s reason for seeking an abortion.

Since 2015, several states have required that abortion counseling include information on the potential to stop the completion of a medication abortion after taking the first drug of the two-drug regimen—a claim that is not supported by credible scientific evidence.

In 2019, four states (Kentucky, Nebraska, North Dakota and Oklahoma) enacted this counseling requirement, and Arkansas amended an existing law that mandated this type of counseling. These laws require medical providers to inform patients about the potential to reverse a medication abortion as part of preabortion counseling and require that the state-provided counseling materials include this information. 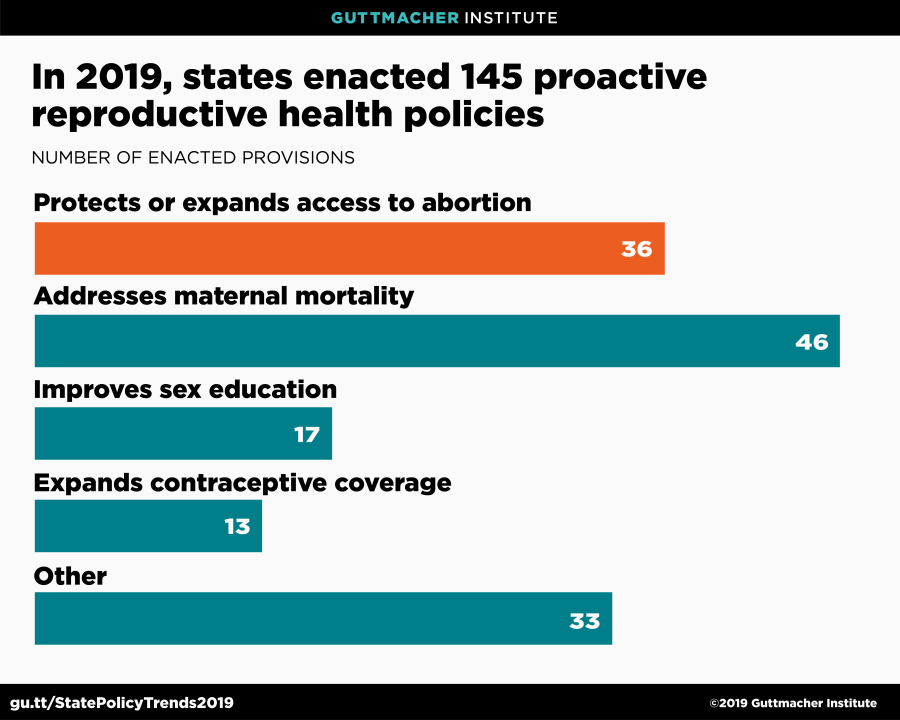 Beyond abortion, states have also enacted legislation that seeks to reduce maternal deaths and that protects and expands access to contraception and sex education.

In 2019, 22 states and the District of Columbia enacted new provisions to address this crisis. The efforts take two overall approaches to improving maternal health: 1) establishing or reviving lapsed statewide maternal mortality review commissions, and 2) expanding access to and improving the quality of maternal health services.

In 2019, 17 states enacted some type of abortion restriction, while 9 states protected or expanded abortion access

A Surge in Bans on Abortion as Early as Six Weeks, Before Most People Know They Are Pregnant

Unprecedented Wave of Abortion Bans is an Urgent Call to Action

With Abortion Rights in Peril, Here’s What Congress Must Do

The U.S. Abortion Rate Continues to Drop: Once Again, State Abortion Restrictions Are Not the Main Driver

In 2019, U.S. state policies enacted to restrict abortion outweighed policies to protect it, but the gap has narrowed greatly

Illinois Steps Up as Other States Decimate Abortion Rights