Fact Sheet
May 2021
Reproductive rights are under attack. Will you help us fight back with facts?
Donate Now

The Reproductive Health Impact Study (RHIS) is a multiyear comprehensive research initiative analyzing the effects of federal and state policy changes on publicly funded family planning care in the United States. The study, which focuses on Arizona, Iowa, New Jersey and Wisconsin, documents the impact of these policies over the period 2017−2022 on family planning service delivery and on patients who rely on this care. New Jersey was selected as a focus state for the RHIS in 2019 because it has a long-established family planning network and policies that are generally supportive of sexual and reproductive health. For the New Jersey study, the Guttmacher Institute is working with the New Jersey Family Planning League and other in-state research and policy partners.

The RHIS was initially conceived in the aftermath of the 2016 election, in anticipation of federal and state efforts to change funding streams and service delivery for publicly funded family planning. As the study progressed, the RHIS team adapted ongoing study activities to document the impact of several events—notably, the 2019 changes to the federal Title X regulations (the Trump-Pence administration’s “domestic gag rule”) and the COVID-19 pandemic.

In early 2021, the Biden-Harris administration took the first step toward rescinding the domestic gag rule by signing a presidential memorandum directing the U.S. Department of Health and Human Services to review the rule and other restrictive Title X regulations and consider whether to suspend, revise or rescind them. In November 2021, the Biden-Harris administration’s Title X rule went into effect, restoring the crucial reproductive health care program to its previous state. The Biden-Harris rule revokes the 2019 Trump-Pence rule and updates regulations to focus on inclusion and health equity. Ohio and 11 other states have filed a lawsuit to block the Biden-Harris rule, which remains in effect while the case continues. Other lawsuits are expected.

Some of the key reproductive outcomes for New Jersey residents that are being tracked in the study appear below. Documenting changes to these outcomes over the study period helps identify the effects of changes related to publicly funded family planning care in the state.

New Jersey has experienced significant policy shifts affecting sexual and reproductive health over the past 12 years. In 2010, Gov. Chris Christie eliminated a state budget line that had funded family planning services for decades, and he withdrew the state’s waiver application to expand Medicaid coverage of these services. More recently, Gov. Phil Murphy has prioritized family planning and reproductive health, beginning when he signed his first bill in 2018, which restored state family planning funding. Since then, the state has expanded maternal care, including doula care, under Medicaid.

After restoring state family planning funding, New Jersey increased this funding to $10.4 million for the 2020 fiscal year to account for the rising need and cost of services. New Jersey also expanded coverage of family planning services through a Medicaid state plan amendment. In 2019, the state launched Plan First, New Jersey’s expanded Medicaid family planning benefit program, which provides coverage of family planning services to individuals who have incomes up to 205% of the federal poverty level. The program covers patients of all genders, all FDA-approved contraceptive methods and the human papillomavirus vaccine. The Reproductive Freedom Act, which is currently in the legislative process, would explicitly ensure the right to reproductive decision making, expand insurance coverage for reproductive health care and prevent medically unnecessary restrictions on abortion care.

In response to the domestic gag rule, New Jersey’s two Planned Parenthood affiliates joined affiliates all over the country in leaving the Title X network in summer 2019. Prior to this exit, nearly 70% of New Jersey patients served through Title X received care at a Planned Parenthood clinic. After leaving the network, these clinics continued to offer comprehensive family planning services using emergency funds.

New Jersey responded to the consequences of the domestic gag rule by providing robust state funding for reproductive and sexual health services. In December 2019, the state legislature approved an additional $9.5 million for entities that lost Title X funding. State funding has also made it possible for all of New Jersey's family planning providers to continue offering comprehensive, unbiased family planning services, including nondirective counseling and referrals.

In March 2019, New Jersey was among 21 states that filed a lawsuit opposing the domestic gag rule. The New Jersey Family Planning League currently serves as the state’s Title X grantee and oversees the program.

In 2018, 112 sites provided publicly supported contraceptive services in New Jersey. Of these, 48 sites received Title X funding and served more than 96,000 contraceptive patients. Twenty-two percent of these patients were served at federally qualified health centers, 68% at Planned Parenthood clinics and 8% at other sites. Fewer than 1% were served at either health department or hospital clinics. 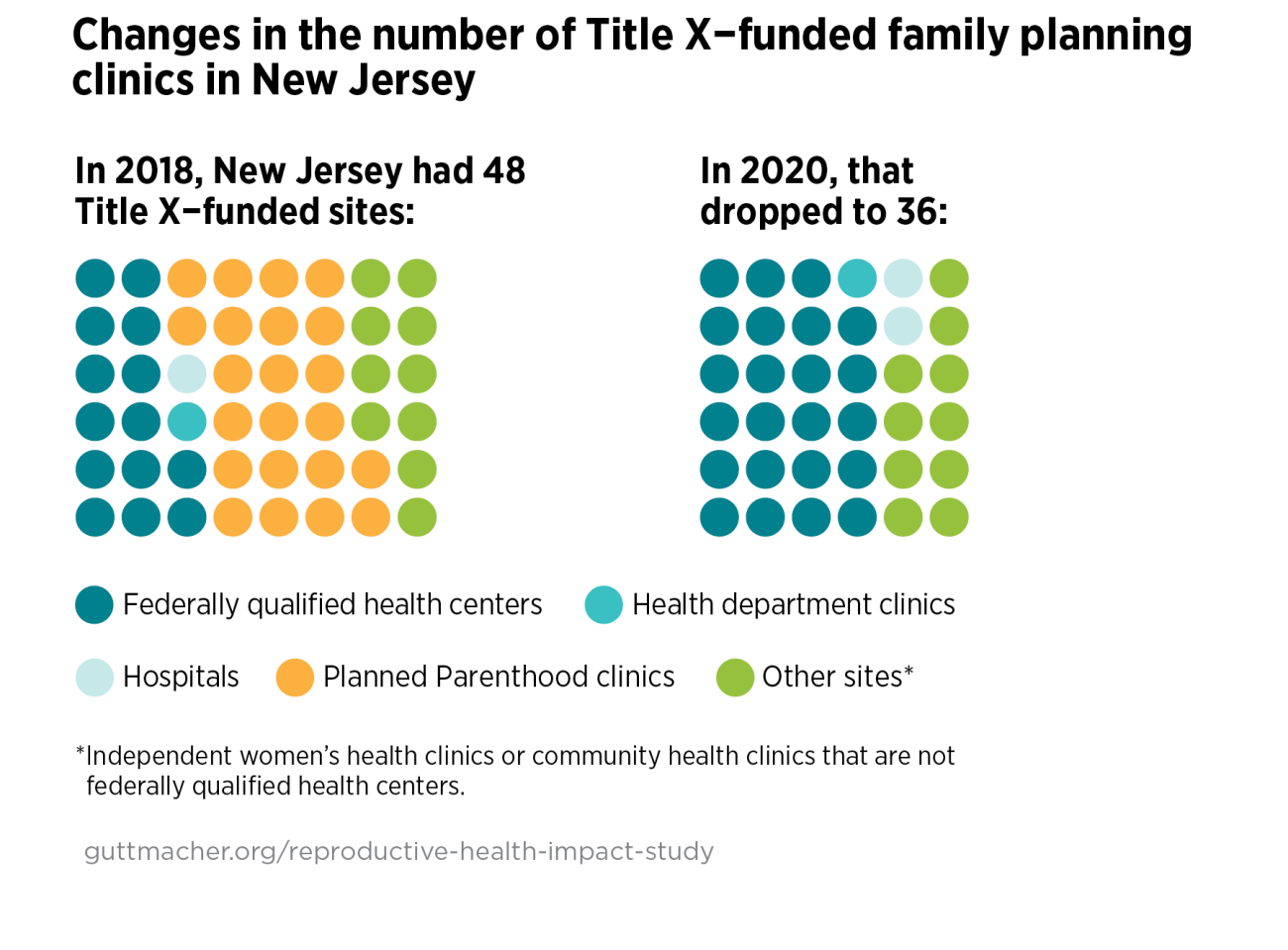 Exclusion of these clinics from Title X resulted in a decline in the program’s capacity. Between 2018 and 2020, the number of female contraceptive patients served by the Title X program in New Jersey, as reported in the 2020 Family Planning Annual Report, fell by 73%.1-3 This decline is attributed to clinics leaving the program because of the domestic gag rule and to the effects of the COVID-19 pandemic. Nationally, 63% of the decrease in Title X patients served during this time is attributed to the rule and 37% to the pandemic. 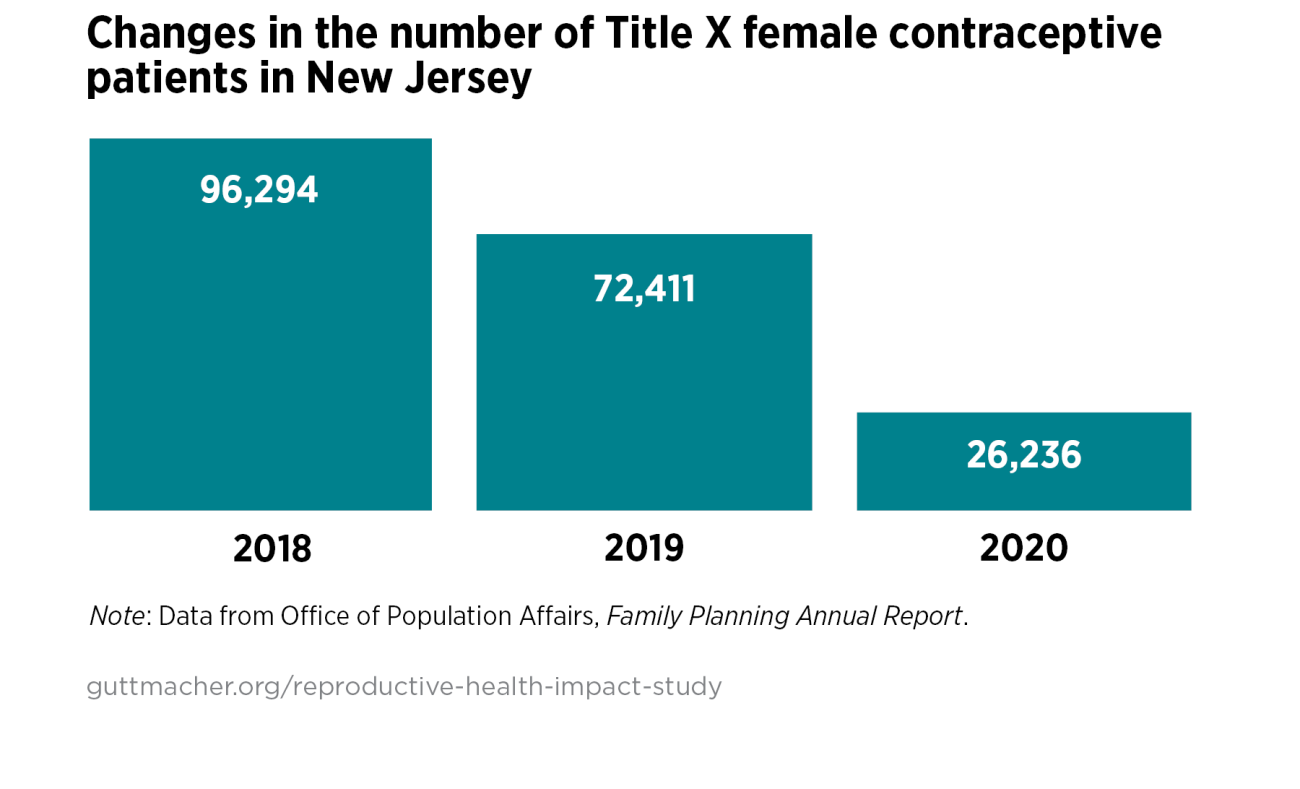 This study was funded in part through a generous grant from the William and Flora Hewlett Foundation. The views expressed are those of the authors and do not necessarily reflect the positions and policies of the donor.

After Years of Havoc, the Biden-Harris Title X Rule Is Now in Effect: What You Need to Know

Early Impacts of the COVID-19 Pandemic: Findings from the 2020 Guttmacher Survey of Reproductive Health Experiences