Fact Sheet
March 2022
Reproductive rights are under attack. Will you help us fight back with facts?
Donate Now

The Reproductive Health Impact Study (RHIS) is a multiyear comprehensive research initiative analyzing the effects of federal and state policy changes on publicly funded family planning care in the United States. The study, which focuses on Arizona, Iowa, New Jersey and Wisconsin, documents the impact of these policies over the period 2017−2022 on family planning service delivery and on patients who rely on this care. Arizona was selected as a focus state for the RHIS in 2018, in anticipation of state-specific shifts in Title X grantee funding, to document how policy changes in family planning service delivery might affect a demographically diverse state with large numbers of immigrant, undocumented and Indigenous residents. For the Arizona study, the Guttmacher Institute is working with Arizona Family Health Partnership, Planned Parenthood of Arizona, and other in-state research and policy partners.

The RHIS was initially conceived in the aftermath of the 2016 election, in anticipation of federal and state efforts to change funding streams and service delivery for publicly funded family planning. As the study progressed, the RHIS team adapted ongoing study activities to document the impact of several events—notably, the 2019 changes to the federal Title X regulations (the Trump-Pence administration’s “domestic gag rule”) and the COVID-19 pandemic.

In early 2021, the Biden-Harris administration took the first step toward rescinding the domestic gag rule by signing a presidential memorandum directing the U.S. Department of Health and Human Services to review the rule and other restrictive Title X regulations and consider whether to suspend, revise or rescind them. In November 2021, the Biden-Harris administration’s Title X rule went into effect, restoring the crucial reproductive health care program to its previous state. The Biden-Harris Title X rule revokes the 2019 Trump-Pence rule and updates regulations to focus on inclusion and health equity. Ohio and 11 other states have filed a lawsuit to block the Biden-Harris rule, which remains in effect while the case continues. Other lawsuits are expected.

Some of the key reproductive outcomes for Arizona residents that are being tracked in the study appear below. Documenting changes to these outcomes over the study period helps identify the effects of changes related to publicly funded family planning care in the state.

Disruptions and Opportunities in Sexual and Reproductive Health Care: How COVID-19 Impacted Service Provision in Three US States

This study describes the shifts family planning providers in Arizona, Iowa and Wisconsin made to continue providing sexual and reproductive health care during the COVID-19 pandemic. Clinics implemented COVID-19 safety protocols, shifted service delivery methods and staffing to meet patient needs, and expanded telehealth services. These innovations could increase access to sexual and reproductive health care for many patients, but standards must be established to ensure that the focus remains on patients’ needs and preferences.

The impact of policy changes from the perspective of providers of family planning care in the US: results from a qualitative study

This study—conducted in three RHIS states between May 2020 and May 2021—examines access to contraception and other sexual and reproductive health care among almost 1,500 patients at more than 50 publicly funded clinics in Arizona, Iowa and Wisconsin. It finds that the COVID-19 pandemic has prevented or delayed as many as half of family planning patients from getting birth control or related sexual and reproductive health care—and that those who experienced financial hardship were particularly affected.
Read the study, read the news release and download the social media graphic (February 2022)

Arizona is a state in political transition. Republicans have controlled the governorship and state legislatures since 2009, but in recent years, the Democratic Party has been earning increased voter support. In the 2020 election, Democrats gained seats in the state Senate and, for the first time since 1996, the state’s voters selected a Democratic candidate for president. The Republican majority consistently passes anti–reproductive health legislation, but a strong progressive coalition has been fighting back against hostile policies and slowly making gains.

Arizona has unique demographics that are shaped by its history and its location on the United States-Mexico border. Nearly a third of Arizona residents identify as Hispanic or Latino. Arizona also has sizeable populations of immigrant, undocumented and Indigenous residents: Thirteen percent of state residents were born in another country.

The Arizona Title X network changed significantly in 2019 as a result of state and national program shifts. In 2017, the Arizona Department of Health Services (AZ DHS) applied for Title X funding and was subsequently awarded 25% of the state’s Title X funding in 2019, leaving the rest of the network with 75% of its previous funds. In the seven-month period during which it received funding, AZ DHS did not provide any services with that money. The network was further disrupted in August 2019, when Planned Parenthood affiliates across the country, including Planned Parenthood Arizona, left the Title X network because of the domestic gag rule regulations. Planned Parenthood Arizona continued to offer family planning services via other funding streams.

AFHP is currently Arizona’s sole Title X grantee. After the domestic gag rule was implemented and Planned Parenthood Arizona left the program, AFHP reallocated some Title X funding to clinics in the Navajo Nation, clinics in underserved counties and a project to prevent reproductive coercion for people with disabilities. 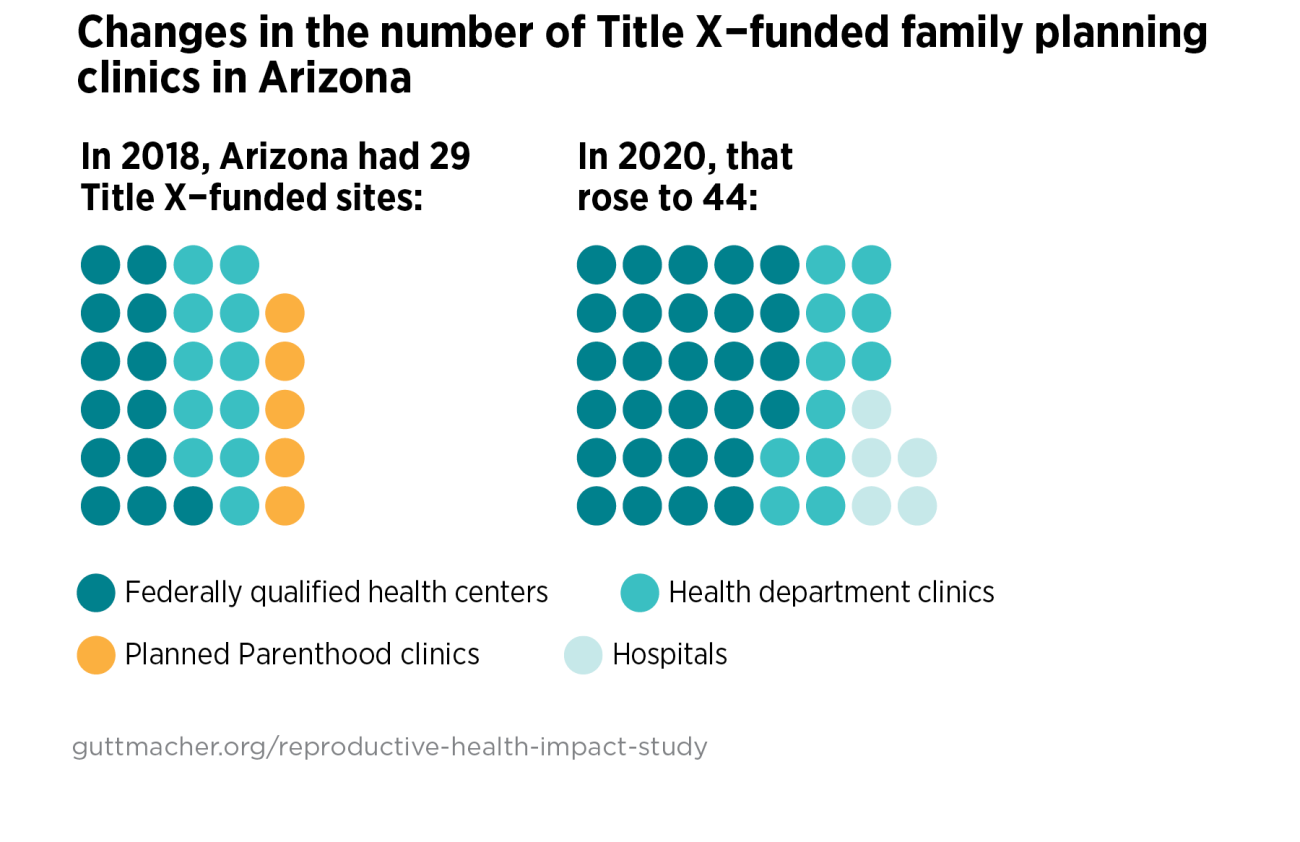 Exclusion of the Planned Parenthood clinics from Title X resulted in a decline in the program’s capacity. Between 2018 and 2020, the number of female contraceptive patients served by the Title X program in Arizona, as reported in the 2020 Family Planning Annual Report, fell by nearly 60%.1,2,3 This decline is attributed to clinics leaving the program because of the domestic gag rule and to the effects of the COVID-19 pandemic. Nationally, 63% of the decrease in Title X patients served during this time is attributed to the rule and 37% to the pandemic. 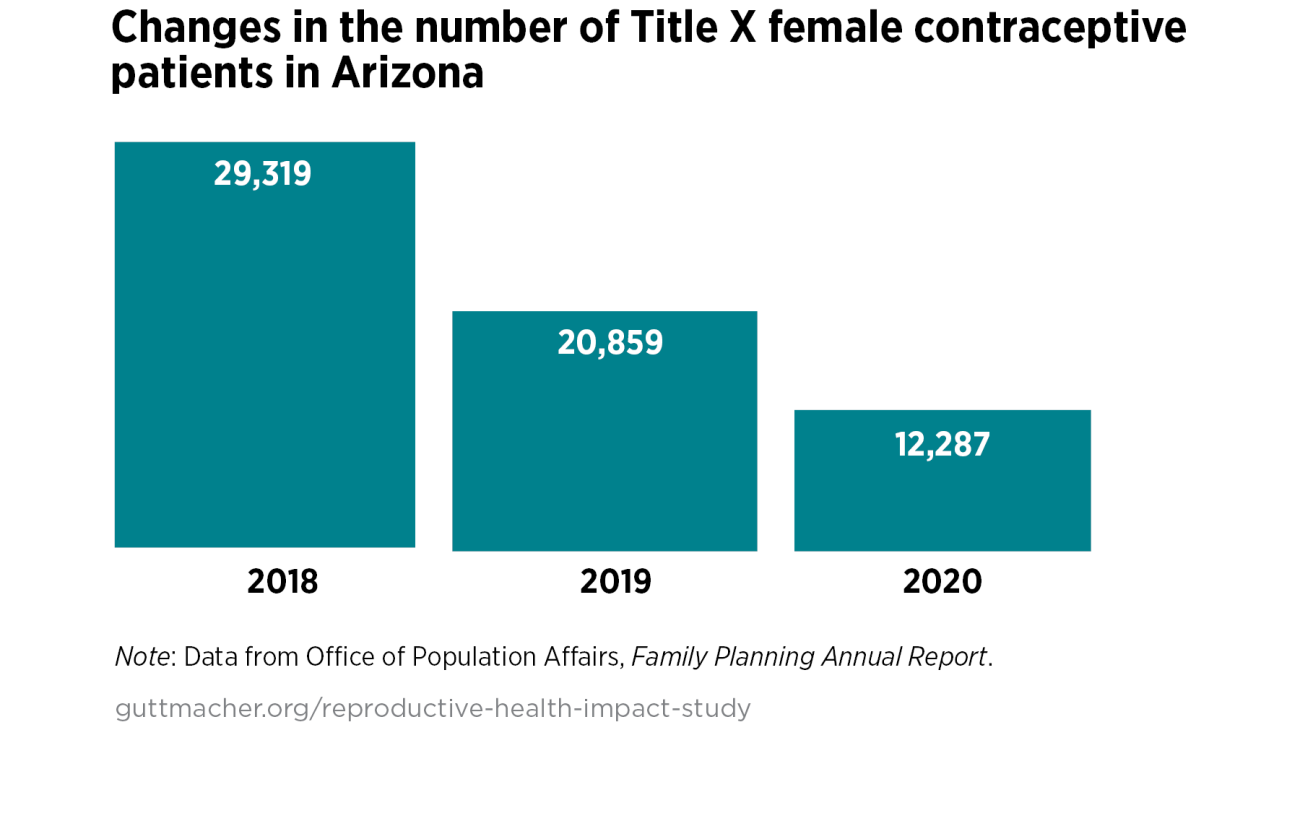 COVID-19 and reproductive health in Arizona

The COVID-19 pandemic has led to significant interruptions in patients’ ability to access family planning—particularly for those who rely on publicly funded clinics. Guttmacher researchers found that at the beginning of the pandemic in spring 2020, 33% of U.S. women faced delays or were unable to get contraceptive or other care because of the pandemic. This proportion decreased to 19% in a second Guttmacher study conducted in summer 2021. RHIS data on the impact of the COVID-19 pandemic on individuals’ ability to access contraceptive methods and sexual and reproductive care in Arizona demonstrate the ongoing challenges of the pandemic at the state level—especially for people who have experienced financial instability as a result of COVID-19.

1. Kost K, Maddow-Zimet I and Little AC, Pregnancy Desires and Pregnancies at the State Level: Estimates for 2017 and Trends Since 2012, New York: Guttmacher Institute, 2021, https://www.guttmacher.org/report/pregnancy-desires-and-pregnancies-sta….

Figure: Impact of the COVID-19 pandemic

1. Kost K, Maddow-Zimet I and Little AC, Pregnancy Desires and Pregnancies at the State Level: Estimates for 2017 and Trends Since 2012, New York: Guttmacher Institute, 2021, https://www.guttmacher.org/report/pregnancy-desires-and-pregnancies-sta….

Figure: Impact of the COVID-19 pandemic

This study was funded in part through a generous grant from the William and Flora Hewlett Foundation. The views expressed are those of the authors and do not necessarily reflect the positions and policies of the donor.

After Years of Havoc, the Biden-Harris Title X Rule Is Now in Effect: What You Need to Know

Early Impacts of the COVID-19 Pandemic: Findings from the 2020 Guttmacher Survey of Reproductive Health Experiences

The Continuing Impacts of the COVID-19 Pandemic in the United States: Findings from the 2021 Guttmacher Survey of Reproductive Health Experiences

The Impact of Policy Changes from the Perspective of Providers of Family Planning Care in the US: Results from a Qualitative Study